Store Page
Don't Starve Together>  Workshop > Waffe's Workshop
This item has been removed from the community because it violates Steam Community & Content Guidelines. It is only visible to you. If you believe your item has been removed by mistake, please contact Steam Support.
This item is incompatible with Don't Starve Together. Please see the instructions page for reasons why this item might not work within Don't Starve Together.
Current visibility: Hidden
This item will only be visible to you, admins, and anyone marked as a creator.
Current visibility: Friends-only
This item will only be visible in searches to you, your friends, and admins. 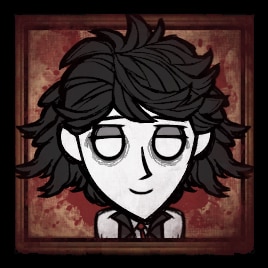 Senjen
Offline
See all 43 collections (some may be hidden)

This item has been added to your Subscriptions. Some games will require you to relaunch them before the item will be downloaded.
Description
This mods add a Halloween-themed cereal killer character... Wack, The Ripper!

He is voiced by a harp, most if not all "announcement" lines (e.g. when you freeze, go in darkness, hounds are approaching, ect.) are unique quotes, and he even has a custom carol too! But that's not all, he's even compatible with the popular "Status Announcements" mod having custom quotes for announcing stats too!

This mod also makes it that everything bleeds, ha-ha-ha! There's configure options to disable the blood fully or make it unique to Wack as well, have fun making a bloodbath!

--< Compendium
• The Ripper: Wack is a serene, yet savage soul struggling to retain what little humanity he has left... from the endlessly evergrowing darkness within him.

• Terror of the Night: Wack silently stalked the streets of London on a mistful midnight, completely driven by his dark, devilish desire for death.
On this frightfully fateful night several damsels met their dreadful demise...
It was a scary scaring sight only to be describable as the feeding of a monstrous beast!
As for our dastardly devil... he was never to be seen again stalking the streets of London, for it was like he vanished without a single trace...
Until now, that is... 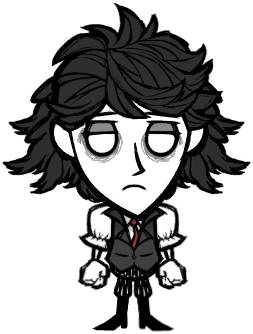 --< Playstyle
Wack is a frail, but powerful combat-oriented character! If you like to play as a glass cannon or combat's one of your favorite things to do then you will probably enjoy playing Wack!
In terms of power when he enters his ripper mode he may even exceed a Mighty Wolfgang in damage output if you're lucky and he is far more agile, but frailer.
You and your allies do also have to be aware of your attacks to not accidentally strike one another... unless you want to, ha-ha-ha!

--< Perks
• Is an expert chef
• Gets double sanity from sleeping and it reduces his ripperness
• Gets a tiny speed boosts during dusk and a small one during night
• Enjoys eating fish gaining a tiny sanity boost and reduces his ripperness
• If you're at or above 25% wetness fish will be preserved in your inventory like Wurt
• Grows longer hair after 20 days which can be shaved! It functions like Wilson's beard

--< Cons
• Loses 50% more sanity from monsters and darkness
• Gets groggy after waking up from sleeping based on amount of time slept
• Gets half positive stats from spoiled and monster foods and loses more sanity
• During day he's tired... attacking, working, dropping/picking up items, harvesting, and crafting all take longer to preform

--< Ripper Mode
Attacking, being attacked, killing, setting fires, holding a sharp weapon, being hungry, eating spoiled or monster foods, freezing/overheating, having low health, or having low sanity all raise his ripperness every second or else it drains.
Attacking, being attacked, killing, setting fires, or eating spoiled or monster foods prolongs the duration of ripper mode.
Ripperness levels remain even when you exit a server or travel between caves.
Killing Chester, Hutch, or a player instantly maximizes ripperness levels.
• Is no longer an expert chef
• Is no longer tired during day
• Attacks fast with sharp weapons
• You gain an attack and speed boost
• He can dodge the Grue once like Winona
• No longer preserves held fish regardless of how wet you are
• Does not gain or lose sanity from most things excluding eating and magic
• When close to going in ripper mode Wack randomly rub his eyes while idle
• You lose sanity from sleeping, but it reduces the duration of ripper mode by 5 seconds every second
• You can force attack other players regardless of PvP being on/off and other players can force attack you too
• You laugh! If you attack during a laugh with a weapon you preform a powerful attack which can hit up to 6 things near you (including other players!) which deals 100 damage + your weapon's damage + your attack bonuses
• Laughing causes you to wake up from sleeping or breaks you out of pinned state and also makes you stop being groggy if you are
• The more consecutive attacks you land raises your laughing chance as well, but getting hit will reset this bonus
• Laughing is also more frequent the lower your health and sanity is

mulliboom Nov 18 @ 2:41pm
can you make he also attack faster with the shield of terror (maybe just slightly) because alone it feels unescessary to do the evil twins fight,because,dark sword goes brrr

Vyuri  [author] Oct 26 @ 4:33pm
@Martin
I'm glad you enjoyed! And yes I would like in the future to make a skin or two for Wack and finish his entire speech files for both ripper and normal modes once I get the time

@Mara
Thanks a lot! I tried my best to balance him fit well with the vanilla cast of characters both appearance and game balance wise I'm glad it came out okay

And haha, ya the stun when going into ripper mode definitely can lead to some unfortunate moments I to met my end a few times to it lol

Mara Oct 26 @ 12:45pm
I'm really loving Wack, I do believe that he's my new main. He's lots of fun to play and I appreciate that he has his pros and cons unlike quite a few other character mods that just feel boring or super op. Most of my deaths with him have been due to the micro stun he gets while going bonkers (I do like the micro stun, it gives more feeling to Wack and his overall character/personality imo. Also, Deerclops, can we timeout for a minute please? LOL)

Martin Oct 26 @ 7:44am
Amazing character, been working for me so far, any plans on making new skins? Like a head for short hair or something? again thank you :)

Waffe  [author] Oct 25 @ 12:07pm
@balika011
Can you post in the discussion
Also can I get a bit more info, were you using other mods?
Because this error doesn't make sense for this mods modmain, just want to make sure its from this mods modmain and not something else.

Waffe  [author] Oct 23 @ 11:47am
@SleepySugarBunz
I made the textures for it and programmed it as a particle effect. Its included as part of this mod, just make sure the blood is enabled in the config.

You can also make it so it only is spawned when wack hurts somebody.

But by default it applies for all sources hurting eachother.