Greenlight > Games > Pixelbomb Games's Workshop
Greenlight is being retired. For more information on how to submit games to steam, refer to this blog post.
This item has been removed from the community because it violates Steam Community & Content Guidelines. It is only visible to you. If you believe your item has been removed by mistake, please contact Steam Support.
This item is incompatible with Greenlight. Please see the instructions page for reasons why this item might not work within Greenlight.
Current visibility: Hidden
This item will only be visible to you, admins, and anyone marked as a creator.
Current visibility: Friends-only
This item will only be visible in searches to you, your friends, and admins.
Beyond Flesh and Blood
Description Discussions6 Announcements38 Comments572

Pixelbomb Games
Offline
See all 78 collections (some may be hidden)

View Beyond Flesh and Blood in the store

Store page
Recent Announcements View All (38)
Beyond Flesh and Blood goes into EARLY ACCESS! 7+ Levels complete
May 27, 2016 - Pixelbomb Games
Pixelbomb Games’ debut offering Beyond Flesh and Blood will be made available on Steam Early Access, far sooner than expected, on 1st June 2016.
By offering the Manchester-set game up for Early Access, the development team is better able to make the game the best it can possibly be.

It also means that the team are offering all PC gamers the chance to shape the entire game as a whole. While it’s brazen, it’s also honest, and our way of providing an enjoyable experience while listening to how we make that experience better.

In terms of development this is a strong opportunity to evaluate every step of the way which is both comfortable and transparent.

Gameplay is king. We will be delivering the best experience we can – and making a standalone and standout product is a challenge worth taking.

For those who would rather wait for the full release, the same applies. Early Access gamers will still get the full game and newest release as standard, and Beyond Flesh and Blood will be getting the proper release treatment in its first episode of 13 levels.

But if you want to be part of Early Access, jump on board as we give you the best community members the chance to be created into a statue in the game, special thanks, the face of Hostile force wanted posters…
Read More
BRAND NEW GAMEPLAY TRAILER - Front Page!
February 1, 2016 - Pixelbomb Games
It's been nearly 2 years since we were Greenlit here - with less than 2 months to go, Beyond Flesh and Blood is set to blow gibs, guts,brains as well as your awesome minds, k?
The full YouTube link to our first gameplay trailer is here: Get sharing - NB, trailer is ESRB M.

Official spiel: "Choc-full of mechs and old school gore, Beyond Flesh and Blood is an agile mech shooter set in the UK city of Manchester, in the year 2281. The game uses real-world city architecture for the dystopian world where humans have long since left Earth to live in orbit, watching the planet through mech and drones – and the only way to power these is through mind-fuelled VR."

We don't need to ask.
You're as ready as we are for this dystopian mech gore as we are...
Read More
Description
Release date: 1st June 2016

SPACE IS EASY. PREPARE FOR EARTH.
An agile, third person mech-based gore-shooter set on dystopian Earth - starting with the ruins of Manchester, UK, 2281.

Battle your way through multiple gore-filled levels, blasting apart grotesque terrorist hives, eliminating wave after wave of enemy scum with powerful weapons that will push your shooter skills beyond.

HUNT the secrets of a dark and hostile 23rd century warzone.

DESTROY anything that gets in your way.

Beyond Flesh and Blood is a story-driven 3rd person action shooter game, with horror overtones and sci-fi gore. Bringing together dystopian themes of dehumanisation, cybernetics, political instability and environmental disaster, we've created a mech-in-mech, immersive experience where the objective is to tactically understand and utilise your environment in a battle against deadly enemies.

This PC game is focused on visual atmosphere and tactical gameplay, it's been important to us as gamers from the outset that every element of the game be as extraordinary as possible. We've made one of the most enhancing features of the game the environments themselves - using visually stunning playscapes to accelerate your experience along with hacking puzzles and challenging missions. 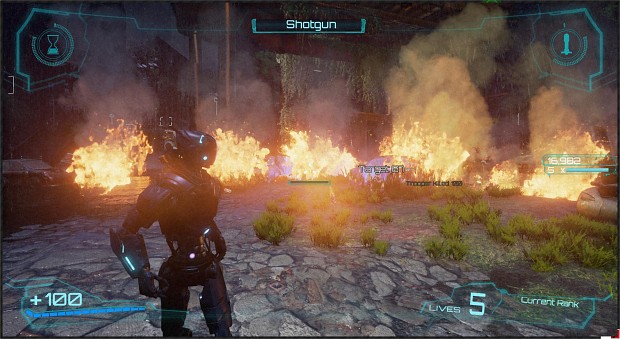 Real-life, prominent locations within the iconic UK city of Manchester are re-imagined into a post-apocalyptic, alien landscape.

The Pixelbomb Games team has been working on the game for nearly two years, and it's rapidly evolved into a much larger world than first imagined - and this is all thanks to your support.
The transition from Unreal 3 to Unreal 4 his currently the biggest task for the developers, but the gameplay has gone beyond, resulting in a vast world and complex story campaign. Go #gamedev!

This is what we're working on now:

EGX saw the last vertical demo slice in Unreal 4 being built - the full game is now being prepared and we still need your support! This is the game that will define the studio and smash all your expectations of what an indie game "should" be.

Go Beyond anything you've ever known. 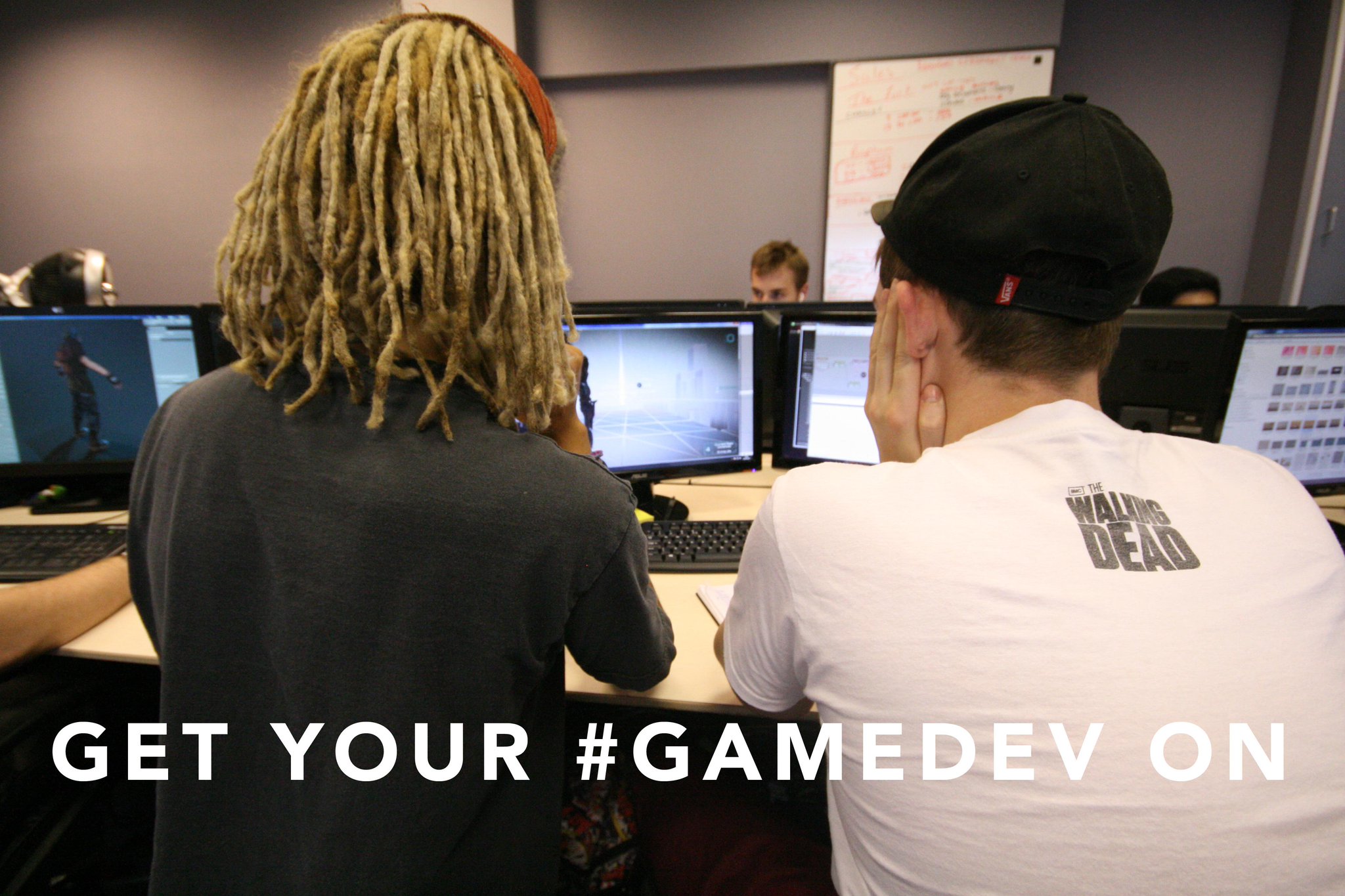 THE TEAM
Philip Muwanga - Coder and Project Lead
I am a Manchester based Video Game developer. After doing my Undergraduate and Masters in Computer Video Games design, at Salford University, I've been a video game developer for the past eight years with my own string of indie titles of PC and Xbox.

Lee Blacklock - Game Designer and Project Lead
I have worked in the Video Games industry for 10 years. My early career saw me working at EA. Soon, I progressed into a role within game and level design for Blade Interactive & Dark Energy Digital. There I worked on many titles including the full WSC series.

Steve DeSykes - Concept Artist and Art Lead
I am Art Director at Pixelbomb Games. My work is inspired by science fiction and horror - although I worked at TT Games and helped create many of the less horror-filled Lego games you may have heard of. 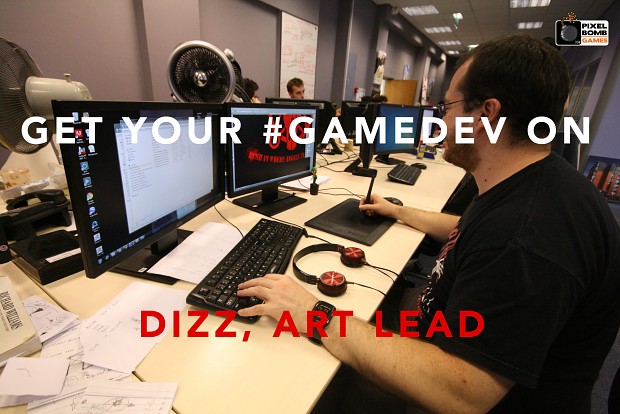 How do I vote?
bbgact

VikingWayne Nov 7, 2014 @ 11:12am
hewy guys. met the team and Played this at playExpo a few weeks back in manchester and LOVE it. my PC can Finally run the Demo :D cannot wait for the full game. keep up the great work

Bangcat Nov 6, 2014 @ 6:21pm
Yep, the mech junkie of STEAM has arived. Like where this is going guys. Would love to see something kinda like Lost Planet 2 that's expanded upon, and it looks like this could do it. Especially with interesting physics play, like chucking cars. The mech play of a 3rd person shooter with the co op and body chuckability of a walk around beat em up, it could definately go places.

This is another mech tittle I have my eye on. As I often say, it's good to see mechs making their come back, and an industry realizing us mech fans have been out here waiting.

Pretty Good Nov 6, 2014 @ 11:19am
Guys for your own sake please change the title of your game. I mean no offense but the title is not only just plain bad, but people are going to initially confuse it with Beyond: Two Souls despite the fact that they are two different games.
< >

Beyond Flesh and Blood has been Greenlit and is now listed in the Steam store. For the latest information, purchase options, and discussions for Beyond Flesh and Blood, please see it on the Steam Store or in the Steam Community.
Visit Store Page
For more details Visit Community Hub
For latest discussions
If you really, really want to, you can continue to the Greenlight page. Information on this page may be out of date, since all the action has moved to the areas noted above.