Greenlight > Games > Smileypop's Workshop
Greenlight is being retired. For more information on how to submit games to steam, refer to this blog post.
This item has been removed from the community because it violates Steam Community & Content Guidelines. It is only visible to you. If you believe your item has been removed by mistake, please contact Steam Support.
This item is incompatible with Greenlight. Please see the instructions page for reasons why this item might not work within Greenlight.
Current visibility: Hidden
This item will only be visible to you, admins, and anyone marked as a creator.
Current visibility: Friends-only
This item will only be visible in searches to you, your friends, and admins.
No More Humans
Description Discussions2 Announcements1 Comments118 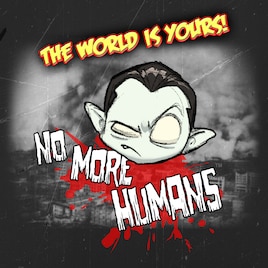 Smileypop
Offline
See all 7 collections (some may be hidden)
Recent Announcements View All (1)
NEW VIDEO
May 26, 2014 - Smileypop

Thank you everyone for your feedback. There have been several complaints about the frame rate of the video. We want to let you know this was due to the video capture software used. We have uploaded a new video with a better framerate, but it is still not as fast as the actual gameplay.

The actual game demo runs very smoothly and it easy to play. We hope you'll check it out.

Read More
Description
Release date: Early 2018
The world is coming to an end... and you are responsible!
WEBSITE: http://www.smileypop.fun/no-more-humans

Choose your favorite monster and head to earth. Destroy each city one by one. Grab the humans to turn them into your minions. Each minion you control makes you stronger. Use your powers to fight other monsters and steal their minions. Powerups and special items will give you an edge over your opponents. But there aren't enough humans to go around. When the population of a town drops to zero, the strongest monster wins. Will you rule the world when there are No More Humans?

No More Humans is a new twist on the popular Horror theme. Instead of saving the world, you're trying to take it over. Each player takes on the role of a classic Hollywood monster (Vampire, Zombie, Werewolf, Mutant, Robot, Alien). Your opponents are the other players a.k.a. monsters. Your victims are the humans. Each human you capture becomes your minion. His/her specialty will increase your powers and make you stronger than your opponents. Control of the town shifts as each monster gathers more minions. When the population hits zero, the monster with the most influence wins.