Greenlight > Games > Mawhrin-Skel's Workshop
Greenlight is being retired. For more information on how to submit games to steam, refer to this blog post.
This item has been removed from the community because it violates Steam Community & Content Guidelines. It is only visible to you. If you believe your item has been removed by mistake, please contact Steam Support.
This item is incompatible with Greenlight. Please see the instructions page for reasons why this item might not work within Greenlight.
Current visibility: Hidden
This item will only be visible to you, admins, and anyone marked as a creator.
Current visibility: Friends-only
This item will only be visible in searches to you, your friends, and admins.
Shallow Space
Description Discussions11 Announcements46 Comments612 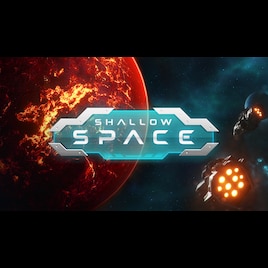 de Havilland
Offline
See all 106 collections (some may be hidden)

View Shallow Space in the store

The latest ship the PLC 'Matar[http//%27http]' is now up for viewing on the 3D turntable over on the blog with some accompanying facts.

The roadmap[http//%27http] has also been updated with the most recent progressions. Stand-by for a big article in-bound over on IndieDB regarding modding and the planned campaign mode!

The Steam store page is now up and running, we will cease updating the Greenlight page and start with faction, blog and Omega catch-up posts over on the store page. One step closer to release, check it!

Read More
of Ship Customisation and the Mustering of Forces
August 17, 2015 - Mawhrin-Skel

The latest development blog article is up, this one discusses some of the concepts of the Ship Configuration and Fleet Configuration screens and there's also a VERY juicy extension video to #45 showing some extended gameplay footage, the ship and fleet config screens in action and a fly around the new PLC 'Matar' - medium cruiser!

What are you waiting for? Take a look at 'of Ship Customisation and the Mustering of Forces'[shallow.space]

"The Flotilla Identity acts as both a way for the Player to glean a formations purpose and its position in the theatre but also encourages the Player to think more carefully about their formations. So it is the intent that this identity system grants bonuses pertaining to that particular squadron’s characteristic. For example the EW Squadron would get increases to passive and active ECM/ECCM modules, Defence Practitioners might get natural damage resistances."

Shallow Space is a fully 3D real time strategy game with RPG-style progression and questing alongside unit construction and ship configuration. The intended field of play for the singleplayer campaign will be an entire planetary system chopped up into playable chunks situated around 'Lagrange' points which we call instances. These instances are teaming with NPC interactions and missions waiting to be progressed.

The idea behind Shallow Space is that all ships large and small are grouped into Wings and then Flotilla, these formations are reinforced in the UI, and perks and attribute bonuses earned by Officers and equipment alike will influence ship attributes and abilities for both the individual ship and in those respective formations.

Mawhrin-Skel  [author] Aug 27, 2015 @ 3:19am
Just to let you know the official store page is live: http://store.steampowered.com/app/305840 we won't be updating this page anymore so be sure to follow the community for cool stuff!

An important occasion, thanks for helping us get there!

Mawhrin-Skel  [author] Aug 18, 2015 @ 11:54am
Hi, so the original plan was the end of this month. At the moment it looks like the release date is going to be the end of October. We apologise for the delay but there is a LOT of admin involved and we don't want to rush it (especially as a few early bad reviews can really kill a game on Steam.)

We are very very active and verbose in the process, with the website being updated multiple times a week ( http://shallow.space) those who have preordered will get Early Access before release.

Again sorry for the inconvenience.

corbin.smith Aug 18, 2015 @ 11:38am
We've been told that this game would be released on steam in alpha for awhile now. Could you be more specific as to when that's going to happen?
< >

Shallow Space has been Greenlit and is now listed in the Steam store. For the latest information, purchase options, and discussions for Shallow Space, please see it on the Steam Store or in the Steam Community.
Visit Store Page
For more details Visit Community Hub
For latest discussions
If you really, really want to, you can continue to the Greenlight page. Information on this page may be out of date, since all the action has moved to the areas noted above.