Greenlight > Games > OxyOxspring's Workshop
Greenlight is being retired. For more information on how to submit games to steam, refer to this blog post.
This item has been removed from the community because it violates Steam Community & Content Guidelines. It is only visible to you. If you believe your item has been removed by mistake, please contact Steam Support.
This item is incompatible with Greenlight. Please see the instructions page for reasons why this item might not work within Greenlight.
Current visibility: Hidden
This item will only be visible to you, admins, and anyone marked as a creator.
Current visibility: Friends-only
This item will only be visible in searches to you, your friends, and admins.
Hashtag Dungeon
Description Discussions4 Announcements9 Comments201 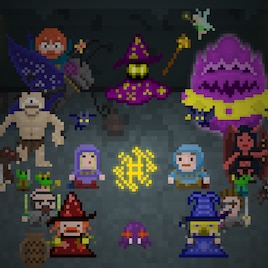 OxyOxspring
Online
See all 22 collections (some may be hidden)

View Hashtag Dungeon in the store

Hey everyone! Just a quick update to those of you who bought the game via the Groupees bundle:

We've emailed them to ask how many keys they need to get you all copies of the game, but they've yet to reply to us. Not sure if they've missed our email or its gone to their spam folder, but we're working on it.

Once we get a total from them we'll send them the keys to add to your accounts. Then we'll be all sorted.

Thanks for your patience on this one. <3

Hello everyone! It's been a while, so I thought it'd be a good idea to let you all know what's going on: We've added a lot of stuff to the game since the early alpha, but due to my job and Kieran's we've not had enough time to get everything finished 100% for launch. We really want the game to be bug free and fun for launch, which is why it's been taking so long.

But there's got to come a time when we decide to launch, and we've been putting it off for a while because we want to make sure it's perfect. It's time to put our money where our mouths are and ship the game after all this time!

So I'm proud to announce that come rain or shine, the game will be released on June 1st, 2016. This gives us enough time to put in the finishing touches and fix the last few bugs we can find. We hope that you'll enjoy it and thank you for your patience!

Read More
Description
Release date: July 2014
KEY FEATURES
What is Hashtag Dungeon?
Hashtag Dungeon is a rogue-like dungeon crawler with a unique social media twist: every dungeon you play in the game is made using tweets grabbed directly from Twitter. Players can use our in-game editor in order to tweet out their own dungeons, messages and creatures so that everyone else can play them! Lots of player's tweets come together in order to make awesome labyrinths for people to delve into.

Hashtag Dungeon was developed with the hope of fostering an active and involved community. During our closed alpha tests we've seen some amazing things done with the tools inside the game. We hope to continually update the game with new features, traps, enemies and bosses based on community feedback. We want to award our players for being creative! It's the most important thing!

Do I need Twitter to play the game?
No, you don't have to have Twitter to play the game. You only need it if you want to help make a dungeon. We have noticed a lot of our testers make Dungeon Master Twitter accounts for the game and we encourage you to do so! If you don't want to make dungeons then we have worked hard to ensure the gameplay is solid and enjoyable too!

The game is designed with collaboration and social interaction in mind. We are looking to reward players who do cool things with the tools we give them - this could be anything from adding more tools to the game in later updates to immortalising an awesome player in the game as a character. We want to be in touch with our community as much as possible!

Where can I find out more about the game?
If you want to know more about the game you can visit our website at {LINK REMOVED}http://www.hashtagdungeon.com or send the developers a tweet at their respective Twitter accounts: @OxyOxspring and @Kieran_Hicks. They'll both be happy to reply to you when they have a spare moment!

Hashtag Dungeon is being made by Kieran Hicks and Sean Oxspring at the University of Lincoln, UK.
< >
201 Comments

OxyOxspring  [author] Apr 18, 2016 @ 10:05am
Hey: yes groupees purchasers will be getting their copies of the game as promised. We've just confirmed a launch date for the game on June 1st - so it should be sometime around then when we send them across the keys they want. Sorry for the wait - work has been pretty heavy for both us devs!

OxyOxspring  [author] Nov 4, 2015 @ 6:43am
That's cool - we're probably going to release the beta to everyone who had a DRM free copy via itch.io, that way people can play it and get it back to us before we release on Steam. If you want any more updates you can follow me on Twitter @OxyOxspring as I post images of the new content on there a lot!

OxyOxspring  [author] Nov 4, 2015 @ 5:49am
Still working on it! The Steam version is going to have a tonne more content... it's just we've gotta squash a tonne of bugs first. We don't want to release until it's ready.

Hippyshake Nov 4, 2015 @ 4:45am
I'd forgotten all about this game. i need to fire up my DRM-free copy (if I can remember my twitter account!). Any news on the Steam release? This was a lot of fun.

Hashtag Dungeon has been Greenlit and is now listed in the Steam store. For the latest information, purchase options, and discussions for Hashtag Dungeon, please see it on the Steam Store or in the Steam Community.
Visit Store Page
For more details Visit Community Hub
For latest discussions
If you really, really want to, you can continue to the Greenlight page. Information on this page may be out of date, since all the action has moved to the areas noted above.