Greenlight > Games > aDFP's Workshop
Greenlight is being retired. For more information on how to submit games to steam, refer to this blog post.
This item has been removed from the community because it violates Steam Community & Content Guidelines. It is only visible to you. If you believe your item has been removed by mistake, please contact Steam Support.
This item is incompatible with Greenlight. Please see the instructions page for reasons why this item might not work within Greenlight.
Current visibility: Hidden
This item will only be visible to you, admins, and anyone marked as a creator.
Current visibility: Friends-only
This item will only be visible in searches to you, your friends, and admins.
The Hit
Description Discussions14 Announcements2 Comments505 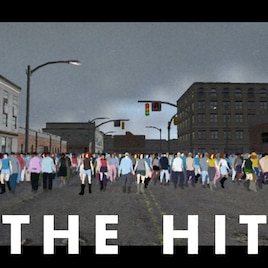 aDFP
Offline
See all 41 collections (some may be hidden)
Recent Announcements View All (2)
New mission: kill the rumour.
June 27, 2014 - aDFP

There's a rumour going round that I'll be releasing The Hit for free. Just to clarify, there's no way I can afford to do that. I've spent too much time, and too much money on development, and I'm far from rich. I'm having to ignore the current Steam sale, 'cause I can't afford to spend money on food AND games, and if the Kickstarter fails because of this rumour, then I won't be in a position to continue working on it.

I will be releasing the game as cheaply as I can, and if you head over to the Kickstarter, you'll be able to get it for £8, which is a lot cheaper than it'll be at launch (most likely £15).

Thanks for your support, and I really hope I can meet you in the city soon.

I've been holding off on spamming you with news until I'm ready to launch the Kickstarter, and well, today's the day!

The cheapest tier for the game is £8 (about $14) and there's a couple of early-access options if you want to play The Hit this side of Christmas.

Thanks for your attention, I can't wait to see you in the City!

Read More
Description
Release date: Fourth Quarter 2014
Overview
Take the role of a hitman in a busy online city. A pistol, a mobile phone and a level one security clearance at the mysterious Agency are your tools. Use them well. Stay incognito, or the next hit could be on you.

The Hit is stealth-shooter with focus on multiplayer (though it'll be posible to play offline, single-player). Team up with your friends, or go head to head in tense competitions to find and kill your target first.

Features
Remix Your City
As a member of the Agency, you will be assigned a home city. Use powerful tools to create buildings and interiors, change the rules, and remix the city any way you want. Download free buildings and objects to use in your city.

Dynamic Narrative Gameplay
The Hit is being developed alongside a brand new player-driven dynamic narrative system. A ‘story-director’ AI monitors the player’s actions and the state of the city and can introduce events as needed, and tailor them to the current situation and characters. Read more here: http://www.gamasutra.com/blogs/DanStubbs/20140402/214565/Dynamic_Narrative_in_The_Hit.php

In-Game Interface
The phone is an all-in-one interface. Use the camera to photograph potential targets, view the city map, or access information on your contract.

Thousand of NPCs
Experience the first online multiplayer game with thousands of NPCs. New technology allows for over 10,000 NPCs in online environments. Hide among the crowds, track down your target and try to spot the enemy agents before they spot you.

Realistic Difficulty
This ain't your regular shooter. Bullets are deadly, and you won't last long in a shootout with the cops. If you're caught, and you can't talk your way out... you'd better run!

Live Role-playing
Run live roleplay sessions, with the ability to change the world around your players, write dialogue in realtime for your NPCs to speak, or even step into the world as a character. Multiple Game-Masters can work together to create the best possible game, and a unique experience for your players.

A Five Year Plan
The Hit will remain in a rolling alpha for the next five years at least. I have a plan for the ‘finished’ game, but it’s not something I can achieve in a hurry, even with the tools I’m building, so I’m developing the game in stages. In the next few months I want to launch the core game, with assassinations, multiplayer and basic remix tools. Then, over the next year I want to improve and refine the core experience, and gradually add more weapons and equipment, driveable vehicles and more. Eventually you’ll be able to create complete, fully playable stories from scratch in a matter of hours.
Popular Discussions View All (14)

Daltsy Dec 27, 2016 @ 6:43pm
@aDFP I don't mind you being ambiguous about the project! So far you have provided more feedback than any other developer I have ever tried contacting! More devs should strive to be as responsive as you! And with futher developments being around the corner, I am more than willing to wait for the version you are planning on releasing with the new year! Thanks, and I can't wait to play your game!

aDFP  [author] Dec 27, 2016 @ 4:32pm
@Daltsy @Shawgydog Thanks for the interest. I'm working flat-out to make this thing as awesome as I can. I've re-written a lot of core code lately, and I'm finally happy that the foundations of the game are smooth, solid and fast enough to take the weight of everything I want to add.

The itch.io version should automatically convert from USD, but please wait for an announcement. I've been having some conversations with third parties recently which should hopefully resolve into something concrete in the new year. Apologies for the vagueness, but if this works out, it'll only mean good things for The Hit.

Daltsy Sep 24, 2016 @ 9:59pm
@aDFP I read the rock paper shotgun article. That's awesome! I also saw that I can buy the game on itch.io. I am aware that you said it's lacking gameplay, and I use USD, so how would I go about paying for it?

aDFP  [author] Sep 24, 2016 @ 9:26am
@Shawgydog @SirOnyx Soon, I promise. I'm working as fast as I can, but I was blindsided this week by an article on RPS (https://www.rockpapershotgun.com/2016/09/21/contract-kills-in-a-procedural-city-the-hit/) . And yes, there's a link to an early version of the game on there, but it's not really ready to show off yet. I'll post an announcement on here as soon as it is.