Store Page
Garry's Mod>  Workshop > Asuka Langley Soryu's Workshop
This item has been removed from the community because it violates Steam Community & Content Guidelines. It is only visible to you. If you believe your item has been removed by mistake, please contact Steam Support.
This item is incompatible with Garry's Mod. Please see the instructions page for reasons why this item might not work within Garry's Mod.
Current visibility: Hidden
This item will only be visible to you, admins, and anyone marked as a creator.
Current visibility: Friends-only
This item will only be visible in searches to you, your friends, and admins. 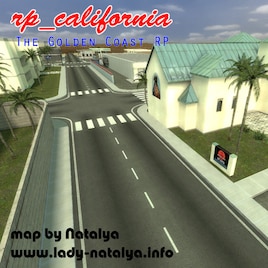 Devvric
Offline
See all 4656 collections (some may be hidden)

This item has been added to your Subscriptions. Some games will require you to relaunch them before the item will be downloaded.
Description
RP California
The Golden Coast RP
Note: Counter-Strike: Source is Required

This is the _r version of the map which I never publicly released, so it's not the one from Gamebanana. It has some lag fixes (mostly areaportals) that the original doesn't have, but nonetheless this map is still quite old, dating to February 2011. There is a missing texture in the Tenoh Office Tower but it isn't obnoxious.

Mestnyy Xa4 xa4irulyat.am Dec 24, 2020 @ 4:52am
Hello, I have a question about police station. This police booth, which opens the gate is right at the middle where the gate is. Is that correct and can it be maybe moved a bit? Because I can't drive in and out on cars :( Thanks for the map, it is great!

elana Sep 7, 2020 @ 2:28pm
I love this map, its well detailed. However alot of its texture is missing. is there anything i can do about that?

@B17zack suck my dick seven times bro half these buildings are real actual buildings in different places in cali. >:( Please bust out your Hammer and Source SDK and show me you can make something better than this or rp_retribution
< >