Greenlight > Games > Supraball's Workshop
Greenlight is being retired. For more information on how to submit games to steam, refer to this blog post.
This item has been removed from the community because it violates Steam Community & Content Guidelines. It is only visible to you. If you believe your item has been removed by mistake, please contact Steam Support.
This item is incompatible with Greenlight. Please see the instructions page for reasons why this item might not work within Greenlight.
Current visibility: Hidden
This item will only be visible to you, admins, and anyone marked as a creator.
Current visibility: Friends-only
This item will only be visible in searches to you, your friends, and admins.
Supraball
Description Discussions52 Announcements18 Comments1198 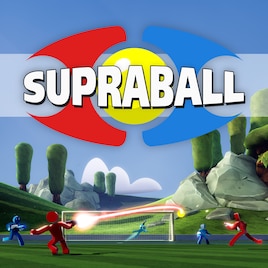 Supraball
Offline
See all 377 collections (some may be hidden)

View Supraball in the store

We are currently doing the final preparations before we can have Supraball enter Early Access state on Steam.

This can be considered the next advanced testing phase. The game will be visible to everyone on steam so we expect a flood of new players.
It will not be featured on the main page at first, but it can be found in the early access section.

Thanks a lot to all beta testers who helped us test the game on a daily basis. You enabled us to get the game to this advanced and rather polished state!

The early access phase won't be free anymore. Everyone will then have to buy the game to get access. The beta keys you've been using until now will be disabled before release.

For the release we're still getting some things ready like a basic report system to ban trolls, notifications to inform players about server problems or other things and we try to improve and solidify the whole server situation - which is the point where we might get overwhelmed, because we simply cannot predict exactly how many players we will get, 300, 3000, 30000 or 300000...

We try to get the early access version out in late April or early May.

- Removed the apply button, all filters are applied immediately now
- Grouped lots of stats into the same categories
- Sorting now by from big to small on first click (small to big before)
- Added tooltips to the columns (bug: they only work on the website, not in the launcher yet)
- The player profiles now all work
- Temporarily disabled the search field

Supraball has been Greenlit and is now listed in the Steam store. For the latest information, purchase options, and discussions for Supraball, please see it on the Steam Store or in the Steam Community.
Visit Store Page
For more details Visit Community Hub
For latest discussions
If you really, really want to, you can continue to the Greenlight page. Information on this page may be out of date, since all the action has moved to the areas noted above.