Greenlight > Games > TheCreator's Workshop
Greenlight is being retired. For more information on how to submit games to steam, refer to this blog post.
This item has been removed from the community because it violates Steam Community & Content Guidelines. It is only visible to you. If you believe your item has been removed by mistake, please contact Steam Support.
This item is incompatible with Greenlight. Please see the instructions page for reasons why this item might not work within Greenlight.
Current visibility: Hidden
This item will only be visible to you, admins, and anyone marked as a creator.
Current visibility: Friends-only
This item will only be visible in searches to you, your friends, and admins.
ADOM (Ancient Domains Of Mystery)
Description Discussions18 Announcements9 Comments616 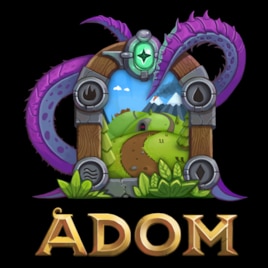 FierceCapybara
Offline
See all 87 collections (some may be hidden)
Indiegogo

View ADOM (Ancient Domains Of Mystery) in the store

We are extremely proud to finally be live with ADOM on Steam. Starting on the 16th of November, 2015, 8pm GMT +1 ADOM can be bought in the store: http://store.steampowered.com/app/333300

Team ADOM will be available in the community hub group chat of the ADOM page for questions, discussions, etc. for at least an hour and we'll probably also play a bit of ADOM in the meantime.

See you there and let us know what you think.

The ADOM launch date on Steam has been set to the 16th of November, 8pm GMT+1 (11am US pacific time).

Please help us to make this a big success by supporting our Thunderclap campaign with your Facebook, Twitter and Tumblr accounts:
http://thndr.me/GdsgXA

Read all the details about our final preparations at
http://www.ancientdomainsofmystery.com/2015/11/help-launching-adom-on-steam-release.html
and visit the Steam store page at
http://store.steampowered.com/app/333300

Thanks for your continued support - we are trying our best to make this a great new step in the history of ADOM!

Read More
Description
ADOM (Ancient Domains Of Mystery) is one of the most successful roguelike games ever created, boasting a brilliant mix of story, RPG, exploration, and intensely strategic and flexible combat.

ABOUT ADOM
ADOM (Ancient Domains Of Mystery) is one of the most successful roguelike games ever created, with downloads in the millions and many more every day. ADOM was the first roguelike to add a true role-playing experience to the roguelike genre, and boasts a brilliant mix of story, RPG, exploration, and intensely strategic and flexible combat. ADOM has been in development since 1994. In 2012 its development was revitalized with an immensely successful crowdfunding campaign on Indiegogo (see the link to the bottom right), now allowing us to offer ADOM both with ASCII and graphical modes allowing you to choose freely, and hopefully in the future also both as Steam- and Non-Steam versions.

ADOM is primarily known for being the first roguelike to include vibrant towns, NPC dialog, and quests, but it offers more than just a rich story line in a complex fantasy world:

ABOUT THE ANCIENT DOMAINS OF MYSTERY
Deep in the mountainous ranges of the Drakalor Chain, Chaos has broken through into Ancardia and it's up to you to decide the fate of the entire realm. You control a single character with a wildy varying set of skills, talents, spells and other abilities. Customized equipment makes each race/class combination a very different experience. Explore a mostly randomized underworld, fight monsters, loot treasures and uncover the many secrets lurking in the world of Ancardia.

Join a generation of gamers in playing a remastered version of this classic rogue-like. Celebrating 20 years, Ancient Domains of Mystery (ADOM) is coming to Steam Greenlight in a big way.

With an overhaul of the graphics, music, new playable races and classes classes, over 400 monsters, tens of thousands of items, crafting, magic, religion, corruption and so much more, randomized dungeons, this reimagined version is one of the most in-depth rogue-likes on the planet.

So, come join us as we return to Ancardia and choose your fate.

ABOUT ADOM ON STEAM
ADOM on Steam will take ADOM gameplay to the next level by introducing the following features (among others):

TESTING ADOM 1.2.0 PRERELEASES
If you have not yet played ADOM, but would like to give it a try, go here:

What re the reasons for opposing ADOM on Steam?
TheCreator

The ADOM launch date on Steam has been set to the 16th of November, 8pm GMT+1 (11am US pacific time).

Please help us to make this a big success by supporting our Thunderclap campaign with your Facebook, Twitter and Tumblr accounts:
http://thndr.me/GdsgXA

Read all the details about our final preparations at
http://www.ancientdomainsofmystery.com/2015/11/help-launching-adom-on-steam-release.html
and visit the Steam store page at
http://store.steampowered.com/app/333300

Thanks for your continued support - we are trying our best to make this a great new step in the history of ADOM!

Blackdeath Nov 10, 2015 @ 1:22pm
I will believe it when i see it beyond a tweat, not exactly a concrete you will see it on x day...
Tweet was done on 11/8 today is 11/10..no news as i can see esp. not "tomorrow". Trust me i want to buy this and play it but i am getting tired of alomst 2 years of delays, he really should have done EA and pooled all the players here to look for bugs etc.

Blackdeath Nov 5, 2015 @ 5:14pm
@draeath - My comment is that its been over a year and no news here on steam as far as a release date or EA. I hope im wrong but i dont think this will available for anyone outside the early buyers for quite along time.

ADOM (Ancient Domains Of Mystery) has been Greenlit and is now listed in the Steam store. For the latest information, purchase options, and discussions for ADOM (Ancient Domains Of Mystery), please see it on the Steam Store or in the Steam Community.
Visit Store Page
For more details Visit Community Hub
For latest discussions
If you really, really want to, you can continue to the Greenlight page. Information on this page may be out of date, since all the action has moved to the areas noted above.