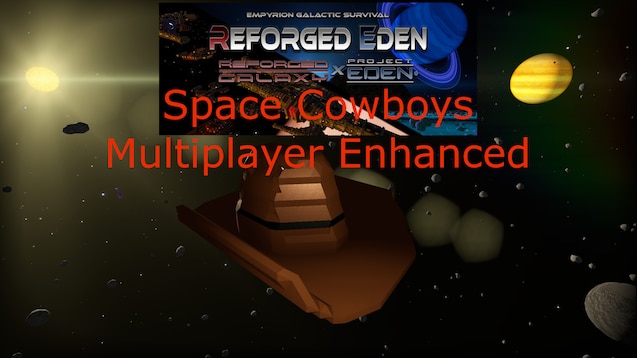 RedScourge
Offline
See all 2 collections (some may be hidden)

This item has been added to your Subscriptions. Some games will require you to relaunch them before the item will be downloaded.
Description
This scenario starts by following the latest build of the Reforged Eden 1.8 scenario, makes a few minor gameplay changes to reduce the grindiness without reducing the difficulty or the depth of the Reforged Eden content, and scales down the galaxy size to have significantly fewer stars (but not too few!), which should make it much more stable for multiplayer servers in affordable paid hosting environments. Creative scenario variant here: https://steamcommunity.com/sharedfiles/filedetails/?id=2633145122

This is what is used on my server, Space Cowboys RE.

My customizations from Reforged Eden 1.8:

- Scales down the galaxy from about 28000 to 30000 stars and 850LY radius to about 12,000 - 14,000 stars and 450LY radius (I like to think my mod helped influence RE to decrease its star quantity somewhat)
- Disable Pandora/Oscutune/Sienna/Masperon starts, as there's way too many starter choices, so you rarely see other players on starters on smaller servers
- Boost chainsaw and hand drill speeds (survival +43%, mechanical +25%, laser +20%, enhanced +67%)
- Wireless Block: Range from 100m to 200m
- Alien/Human NPC Crew: CPU boost from 2500 to 5000
- Made 10-20% of space and moon playfields PvP
- Added Furnace and ATM to CV
- SV/HV cargo holds 4x the default volume, for easier starts (thruster power remains unchanged)
- Detector/Radar: Increase ranges a bit + CV space ranges a lot, add HV T2
- Increase Base Teleporter range to 180LY
- Added Advanced Pentaxid Tank for CV with 2x capacity
- Allow CV Telepad to reach other sectors within same star system
- Increase detection range of many Pentaxid asteroids, before some of them could only be pinged and discovered from 4.5km or 3km away, now most of them are pingable at 10km and discoverable at 6km respectively
- Undo the v1.6 nerf of solar panels
- Reduce recoil of laser minigun (kinda silly for lasers to have big recoil)
- Boost Thermal Regulator tDelta range from +/- 30c to 50c to better balance Ningues starts
- Boost Repair Bay repair speed 4x for T1, 10x for T2

Shadowpheonix May 16 @ 9:44pm
@RedScourge Thank you very much.
I had tried tweaking it myself, but had overdone it a bit (I gave it the exact same damage, range, and fuel values as the hand drill, and it wound up 1-hitting every tree I used it on). :D

RedScourge  [author] May 16 @ 8:08pm
@Shadowpheonix Done. I've essentially doubled the damage it does, which makes it cut faster, and cutting faster in turn means it uses less fuel at the same time. In the grand scheme of things it wont make a huge difference, but it only required a single config line change, and early on it could be helpful. Strangely, all the different types of trees have the same hitpoints despite not giving the same amount of wood. I would change that, but I'd rather wait for the RE devs to change that if they think it might be a worthwhile balance tweak.

RedScourge  [author] May 15 @ 8:03pm
@Shadowpheonix Thanks for the feedback! An interesting idea, I don't think it would affect the game balance, but it might make a noticeable impact on grindiness. This is exactly the sort of thing I look for in something that could use a tweak.

Shadowpheonix May 13 @ 7:01pm
@RedScourge: Thank you very much for creating this variant of Reforged Eden. I personally found normal RE too difficult & grindy, and your version solves that for me almost perfectly.
However, if you are willing, I would love it if the chainsaw could be tweaked to use less fuel and work a bit faster (I think the speed and fuel consumption should be about equal to the hand drill). :D

Skotty May 1 @ 4:59am
@RedScourge and @Vedaire69. Thanks for the tips. I know you cant please everybody all of the time.

Vedaire69 Apr 30 @ 9:27pm
another note be careful with the radius setting you can wipe out huge chunks of landscape with that setting if you arent careful

RedScourge  [author] Apr 30 @ 8:08pm
I should also point out though that if you customize the scenario files, they will get wiped out the next time Steam updates the files though, so you'd want to copy the whole scenario folder, and throw it into Steam\steamapps\common\Empyrion - Galactic Survival\Content\Scenarios\ but then you become responsible for syncing in any updates then re-applying your customizations yourself (which is what I do with this scenario whenever the RE folks push out an update). That's fine if you run a server though, as you're really supposed to run a server from its own separate copy of the scenario, otherwise if the scenario maintainer breaks something, it would also break your server the next time it updates.

RedScourge  [author] Apr 30 @ 8:03pm
@Skotty Thanks for the positive feedback! I tend to be a bit conservative with changes that I make from the RE baseline, at least at first, for fear of hurting the game balance or going too far and displeasing some of the users even though some may be pleased with the changes.

If you want to customize the hand drills further, it's in the scenario's /Content/Configuration/ItemsConfig.ecf file, you'd look for the item definitions for SurvivalTool, Drill, DrillT2, and DrillEpic, and under Child 0 for all except Child 1 for the Survival Tool, the relevant stats are Damage, Range, and Radius. I think I only changed Damage. I think you will find this scenario's files under Steam\steamapps\workshop\content\383120\2583255414

Skotty Apr 30 @ 7:54pm
This is great. You could make the Hand Drills even faster please. ( I would do it myself but Im not sure where the config file is for this). RE is so mind numbingly grindy, I dont want to spend most of my game time mining. But at a certain speed, mining actually becomes fun and satisfactory . . . Kellers Extreme Galaxy the mining is way OP but stupid fun. Not that fast but somewhere in between.
< >