Store Page
Stellaris >  Workshop > Brick's Workshop
This item has been removed from the community because it violates Steam Community & Content Guidelines. It is only visible to you. If you believe your item has been removed by mistake, please contact Steam Support.
This item is incompatible with Stellaris. Please see the instructions page for reasons why this item might not work within Stellaris.
Current visibility: Hidden
This item will only be visible to you, admins, and anyone marked as a creator.
Current visibility: Friends-only
This item will only be visible in searches to you, your friends, and admins. 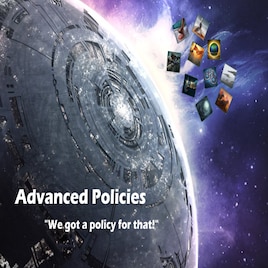 Brick
Offline
See all 67 collections (some may be hidden)

This item has been added to your Subscriptions. Some games will require you to relaunch them before the item will be downloaded.
Description
Advanced Policies
What is this mod? Why is it here? Where have my pants gone? Well all execpt those pants are simple. This mod is aimed at making the internal workings on an empire more unique. The shortest way to put it. I felt like it deserved more. So i took some time and am working on making more for it.

My plans with this are rather simple, i want to make more events and give depth where there is little beyond just a single bonus.
My main issue with this is that i need to do a lot of events which takes time. A lot of time.

Currenct Content/Goal
As of V1.1.0, I have reached my first goal of adding a policy category to every civic. This is the first phase of what i had planned.
My next goal is to rework some stuff i already made as i have learned new and better approaches to it and add more depth where possible.
Beyond that i guess il be going and making more events. Maybe even a new mod that does anomolies.
Lastly if you have feedback, of any kind, please let me know. Be it through a message or like/dislike. It gives me an idea what is liked and what is not.

Beyond stuff like that i currently have the following content implentent:
Current version: v1.1.2
Compatibility
This mod overwrites only 1 file. That is of course in the economic_categories.
In other words if you have a problem with modifiers not working as intended i recommend the Universial modifiers Mod as a fix to this issue.
Lastly while that is the only overwrite, my mod does check for civics, origins, government forms/types, traits and ethics. If any of those are overwriten by other mods there is a chance that some components of this mod might cease to function as intended. But that does not mean it would not function. Any addition of content however should still allow this mod to function.

Example: If mod X overwrites democracies for example, anything that checks for that might give it a false rather then true. That would make it harder for my mod to detect the AI or player is a democracy. But any other forms or unchanged civics/origins events/policies or the liking might still have there triggers in place and will still function.

Special thanks
When i first started this mod i was new to modding for Stellaris so i must confess that i would not be here without the help of the Discord Stellaris modding den and a few people especially like OldEnt and Corsairmarks. If they ever read this i wish to thank them for all the help and pointing me in the right direction regarding usefull knowledge.

Brick  [author] Aug 4 @ 10:46am
@PCR_Anibal oh i already made a schematic of my plans, it will be a teired approach based on what teir of the policy you are in. Will be more work. But that should make it more decent for less extreme cases like you experienced.

Brick  [author] Aug 4 @ 1:04am
@PCR_Anibal, funny you mention that actually. i recently updated it last update to see what CB is being used in the war and on what side. If it is anything that can wipe it out completely be it claim, purification or collosus total war and the sort. Then you would not get those penalties. As we had people before just declare a war and sit in the back while no combat was happening to avoid any penalties.

While i do not know the specifics of the war in question, i agree that given the fact that your opponent is superior in war it should not have given you a penalty for it or if it did, it should not have been that harsh given the context. I dont have an easy fix, but i will make a note of it now that once i get around to the next update i will work on improving situations like that. As my design was focused on the extreme cases of war in stellaris.

PCR_Anibal Aug 3 @ 1:38pm
Hello! Jus trying this mod and the National state policy/situation became a complete trap AND immersion breaking. I had the bad luck of spawning next to an advanced militaristic dictatorship (being a materialist pacifist xenophile). Naturally, they ended up declaring war very soon.

Great, my empire is facing a superior enemy, who wants to slave my very happy and very free population, this is the time for a national emergency situation right?

But almost as soon as I declare it my farmers started protesting and got food shortage and then energy crisis (50%!!! of my monthly credits) and then there was internal strife. The protest and internal strife, besides being much more crippling than it should be, shoudln't happen in a defensive war against a slaving empire, while the energy crisis curring your monthly credits in half is quite bonkers

Brick  [author] Jul 30 @ 7:45am
@Arievillo, it should function as intended. This mod is designed to be an addon, as such it should function even when a lot of things are added or base game stuff overwriten. The only thing you might miss out on is policies for civics that other mods have added for example.

Arievilo Jul 30 @ 6:40am
I would love to try your mod. But there are 2 mods i can't live without: PD and Startech AI and i think there will be compatibility issues?

Granted i am not sure if the new Agenda's i add can be selected in the 'Ruler choose agenda' mod. Lastly the 'Expanded Mandates' should not effect anything. As my entire mod is build upon the idea of not overwriting any base game content. Speaking of i should probably add a compatibility section to my mod page.

henk Mar 29 @ 6:41am
Does this conflict with Ruler choose agenda, or expanded mandates?
< >