Greenlight > Games > SgtConti's Workshop
Greenlight is being retired. For more information on how to submit games to steam, refer to this blog post.
This item has been removed from the community because it violates Steam Community & Content Guidelines. It is only visible to you. If you believe your item has been removed by mistake, please contact Steam Support.
This item is incompatible with Greenlight. Please see the instructions page for reasons why this item might not work within Greenlight.
Current visibility: Hidden
This item will only be visible to you, admins, and anyone marked as a creator.
Current visibility: Friends-only
This item will only be visible in searches to you, your friends, and admins.
Shadows of War
Description Discussions3 Announcements2 Comments179 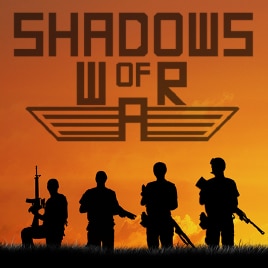 View Shadows of War in the store

It's finally the day.
Shadows of War has launched as an Alpha version on IndieGameStand.com, it is available in it's currently Alpha state, for 9.99$ (-25% for 24 hours).
https://indiegamestand.com/store/973/shadows-of-war/
The multiplayer is included, so you will hopefully be able to play against somebody already now :)
But if you are not sure about wether to buy or not to buy, you can try out the free light alpha on Shadows of War`s IndieDB site:
http://www.indiedb.com/games/shadows-of-war/downloads

As a little report about how the Greenlight campaign is going:
We are currently 47% of the way to the Top 100 and we will hopefully be able to push it much further in the next few days with your support. The game has now been for some time on Greenlight and we hope to be able to get alot further soon.
Thank you for reading, be sure to checkout our Twitter & Facebook[www.facebook.com], to get the recent news about SoW and other projects ;)
- Conti

So heres a little picture showing the roadmap of the development:

And i also wanted to note that most multiplayer bugs have been fixed,
and the 0.6.x branch is almost ready to launch ;)
There's even a youtuber that made a video about shadows of war, you can check it out here.
Thank you for reading, be sure to checkout our Twitter & Facebook[www.facebook.com],
to get the recent news about SoW and other projects ;)
- Conti

Massive maps
Fight in massive battlefields against your worst foe!
Challenge your friends in a 1v1 battle, show them who is in control.
Some maps also have unique elements, that requires you to change your tactics.
The bigger the map, the harder it will be.
You always need to have an eye on every section of the map.
Be fast to take counter measures of the enemy's attacks!

Old-School gamer?
The game also offers the Hardcore mode, for old-school gamers that needs a challenge.
You are low on money, which means you can order less units onto the battlefield.
Support strikes will be rarely used, since they're costing too much.
Keep track of your tickets, you can't lose a single one!
You really need to do everything to prevent the enemy from marching into your land.
Always do your best! Else, loosing can't be prevented.
Remember the good old days, where games hadn't got any XP system?
You only played for fun, not for unlocks or that stuff? Like that?
Then SoW is the perfect game for you, no DLC, no XP, no Micro-Transactions.

The Story
1944, a German Science project, was sealed and hidden.
It was never meant to be found. But in 2013, a new Federal Chancellor was elected.
Then, old research projects were activated again, this is where everything began...
One of the projects, were a bomb, not a casual one.
They built the bomb after the blueprints they've found.
Then they tested it, the bomb detonated successfully, with a devastating effect.
A world was left, that were pushed into the shadows, no hope, no life as it is known.
Nations in despair, began to wage war. The world, at the brink of total destruction.
Now we are here. No alliances, all fighting for survival.
Russia, now facing Germany again, on the battlefields of Europe.

Heiach TTV Jul 2, 2015 @ 9:56am
@SgtConti
I've been having massive issues getting my construct 2 game to work properly online.. and even if I managed it, I'd probably have to re-write it all so it would work on Steam? Did you/have you had to do that so your game works on steam?

Shadows of War has been Greenlit and is now listed in the Steam store. For the latest information, purchase options, and discussions for Shadows of War, please see it on the Steam Store or in the Steam Community.
Visit Store Page
For more details Visit Community Hub
For latest discussions
If you really, really want to, you can continue to the Greenlight page. Information on this page may be out of date, since all the action has moved to the areas noted above.