Greenlight > Games > Onagro Studios's Workshop
Greenlight is being retired. For more information on how to submit games to steam, refer to this blog post.
This item has been removed from the community because it violates Steam Community & Content Guidelines. It is only visible to you. If you believe your item has been removed by mistake, please contact Steam Support.
This item is incompatible with Greenlight. Please see the instructions page for reasons why this item might not work within Greenlight.
Current visibility: Hidden
This item will only be visible to you, admins, and anyone marked as a creator.
Current visibility: Friends-only
This item will only be visible in searches to you, your friends, and admins.
Moira
Description Discussions3 Announcements8 Comments243 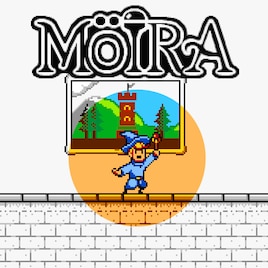 View Moira in the store

Store page
Recent Announcements View All (8)
A thank you note from us: our Kickstarter is over
April 14, 2016 - Onagro Studios

Hi everyone! Our campaign has come to an end. We'd like to thank everyone who voted on us here: we wouldn't be where we stand today if it wasn't for Greenlight: https://www.kickstarter.com/projects/1449928723/moira-0

Hi everyone! If you're still interested in supporting us on Kickstarter, this is the chance! Check it out: https://www.kickstarter.com/projects/1449928723/moira-0

We've already funded our game, but we still have some neat stretch goals. Let's make this game awesome, shall we?

Read More
Description
Release date: December 2015(Beta)
Game Details
Möira is an action platformer that draws inspiration from the classic 8-bit portable games with a modern twist, memorable characters, lots of spells and awesome secrets! You play as Rubick, an young magician apprentice who’s searching for his missing master. In order to accomplish that, Rubick must travel through the Magic Kingdoms mimicking enemies’ powers and learning how to combine them using the staff his old master left to him.

However, Rubick’s adventure won’t be easy since he’s going to fight against foes so powerful that are capable of distorting the limitations and break the rules of the land of Möira itself.

Another important feature in the game is the ability to combine powers you’ve learned. Not all the powers are combinable, though. Some enemies will only take damage from a specific combination, so, if you ever come into trouble fighting one of the bad guys, think outside the box!

More information can be seen at our futute Kickstarter page as soon as we get the campaign back! Make sure to check it out!
This page will also be updated as we progress.
Popular Discussions View All (3)

When is this getting released?
NABN00B

Moira has been Greenlit and is now listed in the Steam store. For the latest information, purchase options, and discussions for Moira, please see it on the Steam Store or in the Steam Community.
Visit Store Page
For more details Visit Community Hub
For latest discussions
If you really, really want to, you can continue to the Greenlight page. Information on this page may be out of date, since all the action has moved to the areas noted above.