Greenlight > Games > protomni's Workshop
Greenlight is being retired. For more information on how to submit games to steam, refer to this blog post.
This item has been removed from the community because it violates Steam Community & Content Guidelines. It is only visible to you. If you believe your item has been removed by mistake, please contact Steam Support.
This item is incompatible with Greenlight. Please see the instructions page for reasons why this item might not work within Greenlight.
Current visibility: Hidden
This item will only be visible to you, admins, and anyone marked as a creator.
Current visibility: Friends-only
This item will only be visible in searches to you, your friends, and admins.
Bernie Needs Love
Description Discussions2 Announcements2 Comments190 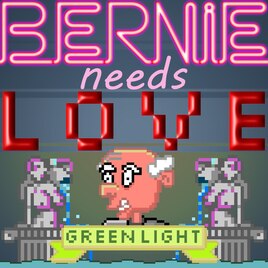 protomni
Offline
See all 16 collections (some may be hidden)

First of all, we want to thank each and every one of you who helped our game get through Greenlight! We did it, guys!

Your support, your patient bug reporting, the wonderfully insightful ideas you suggest, and the sheer stamina we get from your supportive messages - all this has been key to us pushing development onward and the quality bar up. There is still a lot to implement, new enemies and gameplay mechanics to add, and 18 levels to design, but we are very proud of what we've achieved so far, and we believe you will enjoy what we have in store for version 0.82:


We are also preparing a new cover and promotional graphics to better convey the atmosphere of our game. Just like the new song mentioned above, this is still a WIP, but here's a peek of the new cover image:

We'll keep you posted on our progress, and stay tuned for a Steam release date soon!

Hi, friends! We're glad to announce the update to version 0.81 is available!

This version introduces the following changes:

Finally, we'd like to thank every fan and reviewer who has helped us so far — despite its undeniable simplicity, Bernie Needs Love is a very ambitious project both in terms of quality and overall art style, so your support is extremely important to help our tiny team of 3 get the game on Steam. So, if you like what we're doing, please help by spreading the word! Thanks! We really appreciate your support!
Read More
Description
Release date: Fourth quarter 2015
Bernie Needs Love is, in essence, a simple and lighthearted platformer in which the player must guide Bernie, a nice but anguished old man chased by death, towards his girlfriend — while avoiding the many hazards of a poorly maintained yet beautiful city and collecting blue 'love-enhancing' pills to make it an extra-special night!

Here is a list of the enemies, items, and obstacles implemented so far:

In a time of eye candy and accessibility over gameplay and personality, Bernie Needs Love truly stands out from the crowd with its charming retro graphics, lovingly composed chiptune music, and hardcore difficulty level — which are sure to satisfy players who grew up in the 8-bit era.

Aesthetically, Bernie Needs Love is both a loveletter to the games of the 80s and early 90s, but also an experiment on getting the most out of a self-imposed set of limitations: the palette is a mix of CPC and C64 colors with a few odd ones that are necessary for highlights and other elements that must stand out, while the original chiptune soundtrack is entirely created with synthesizers that faithfully emulate the hardware of iconic 8-bit and 16-bit machines.

Regardless of its nostalgic appeal, Bernie Needs Love is an up-to-date game from the depicted subjects (i.e. the anguish of life in the constant shadow of imminent death, one's need for love and sex, the pharmaceutical industry, etc.) to the modern conveniences it provides, such as automatic support for the Xbox 360 controller, quick and easy switching between the windowed and fullscreen modes, audio options (toggle-enabled and independent controls for Music and SFX), and saving the player progress. Even the hair-pulling difficulty is balanced with infinite lives, immediate restart upon death, and no loading whatsoever after the first loading screen upon start (which shouldn't take more then 3 seconds, by the way).

The game is already available, but will remain in beta while stages and features are added. Once we reach the 30 planned stages (we're currently working on stages 11 to 20), the beta phase and the correspondent discounted price will be over. Development is expected to be complete in Q1 2015.

The 30 stages are divided as follows:

Each area is subdivided in two to three subareas. For example, here is the subdivision of the first ten levels:

The second area, focused on the Carnival festivities of Bernie's city, starts with a street parade and will later take our protagonist to the arena where samba schools exhibit their humongous thematic cars to thousands of viewers. Finally, another subarea will be added for the second boss battle — but we're still deciding on the exact environment. The same model will be applied to the 3rd and last area, the beach: from a sunny morning to the new year's eve celebration, levels 3-1 to 3-10 will span across such settings and finish with a one last 1-on-1 fierce encounter with the reaper.

For now, we support Windows and Linux (32 and 64-bit systems) — but a Mac port is very likely sometime after version 1.0 is released for the two current platforms.
Popular Discussions View All (2)

hi
ah she up

protomni  [author] Jun 8, 2015 @ 7:56am
@Mhmmm - We're glad you managed to redeem your key! You assumed correctly: the game is still not launched, so that is why it does not show in Library yet. Just for safety, please keep your Steam key in case you need to reenter it once the game is made available here. We intended to add Steam keys to other stores only after we complete the game's profile (a lot to do, perhaps 1 more week of work before we're ready), but the sudden risk of Desura shutting down led us to getting our user base from there to here in a hurry - despite the game's current unavailable status.

Bernie Needs Love has been Greenlit and is now listed in the Steam store. For the latest information, purchase options, and discussions for Bernie Needs Love, please see it on the Steam Store or in the Steam Community.
Visit Store Page
For more details Visit Community Hub
For latest discussions
If you really, really want to, you can continue to the Greenlight page. Information on this page may be out of date, since all the action has moved to the areas noted above.