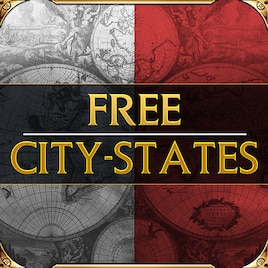 Zegangani
Offline
See all 27 collections (some may be hidden)

This item has been added to your Subscriptions. Some games will require you to relaunch them before the item will be downloaded.
Description
Do you also wonder why Barbarian Clans can turn into City-States (with Barbarian Clans Mode Active) but Free Cities cannot? Well, here is your Answer:

With this Mode, Free Cities have a chance to turn into a City-State durring a Game (not tied to Barbrian Clans Mode).

Note:
- Only Cities that were NOT Original Capital Cities or City-States and do not have any World Wonder can turn into a City-State.
- This mod increases the Amount of City-State Players by 50% and then saves 50% of them in a Pool, so they can spawn later in the Game (reserving them for the Free Cities that may turn into these City-States)*. In order to do that this Mod changes their Starting Locations. In most Cases the Start Positions of City-States will be ok, if you do not use a huge Amount of City States in your Game. You can use my Customization VI Mod that increases the Amount of Players (Major and Minor) to bypass this Inconvenience.
*If You select, for example, 10 City-States in the Set-Up-Menu, then Only 5 will be generated at the Start of the Game. The rest will be reserved.

Needs Rise and Fall or Gathering Storm DLC in order to work.

NOTE:
This Mod is just an update of Free City States by Tiramisu, that isn't currently working/supported. I only updated it, so Credits should go to the original Author. If the Original Author wants me to remove this Mod from the Steam Workshop then I will do it.

This Mod is updated with the Author's Permission.

*If the Free City is damaged this Chance will decrease based on Damage.

Free City-State inheret City Name:
Set this to True to give the new City-State the Name of the former Free City (Default Value: False).

Free City-State inheret City Plots:
Set this to True to allow the new City-State to keep all Tiles of the former Free City (including improvements and Districts already built) (Default Value: False).
If set to false, then the new CS would need need to improve its tiles from scratsh.

To Do:
- Fix City-State Panel not showing the new inherited Name of (Free) City-States (Probably no compatibility with CSE (UI) as that Mod is regulary updated, so I can't Fix that everytime there is an update for CSE).
- Perhaps making Barbarian Clans turn into Free Cities, but only if Firaxis releases a BugFix Update soon.
- . . .

Compatibility and Recommendations:
This Mod is fully Compatible with Customization VI, Real Allies, Yet (not) Another Maps Pack, CIVITAS City-States Expanded and any Mod that adds New City-States to the Game.

Check Out My Other Mods:
- Resource Cultivation: Cultivate any Resource in your Territory that you have worked.
- Real Allies: Stops all Alliance Players from attacking each others' suzerained City-States.
- Customization VI: Customize your Game with various Options.
- Uninterrupted Wonder Construction [Revived]: Stops all Players from building a Wonder if it's being built by another Player.

Support:
If you like this Mod and want to see more like it or just feel Generous, you can support me with a Coffee (it keeps me concentrated while modding ;) ). Your Support will really encourage me to constantly make new great content for Civ VI. Thanks!

Zegangani  [author] Sep 11 @ 1:56pm
[Post 2] And Yes, The Barbarian Clans Bug with having low Pop/ few Units will be considered for this.

I've decided to make a Mod series that tackles many aspects of the Game, by introducing new mechanics that interract with existing ones, as well as reworking some of the latter.

Here is a Discussion on one of the new Mechanics (if you're interested):
https://forums.civfanatics.com/threads/collecting-ideas-for-a-rise-and-fall-of-civs-dynasties-cultural-pressure-or-ethnicity-mod-for-civ6.673129/

I will post more details on the First Pack later Today or Tomorrow (On CivFanatics).

Zegangani  [author] Sep 11 @ 1:51pm
@ChrisMartin, [Post 1] a Neolithic Start isn't impossible to make, but the lack of DLL forces us to hardcode the AI decisions/behavior for this. Gedemon has made an excellent Civ VI overhaul Mod (that you can find on CivFanatics), that also makes the Players start as minor Factions (No City-States in his Mod) with Cultural Ethnicity, Immigration..etc, howover they have stopped working on this Project for Civ VI, but they are moving it to Humankind.
So although it is possible to make a decent Neolithic Start Mod, it would be only beneficial for Multiplayer Games. And since I'm a Single Player Person, I'm not interested in making this.

The Idea is to make Minor Factions more dynamic, so in regard to trade and diplomacy as well as internal changes (developement). Barbs (and maybe also goody Huts) may turn into Free Cities (Goodies directly into CSs), that then turn into CSs. based on the actions, power/importance and expansion of CSs, they may turn into Major Civs.

ChrisMartin Sep 11 @ 9:12am
@Zegangani I love that idea! Some version of HumanKind start? It would be wild if you in Civ6 started as an Barbarian, explored a bit, could settled your Barb-camp. Later you could "upgrade" it to a CityState, and then again to a major Civ, that could produce more Settlers and can expand.
Well, maybe a bit more realistic; You start the game with you and a number of other major Civs, with the occasionally Barb-camps popping up, like we have it today. Something like Start with 8 major civs and 10 CityStates, only 6 majors and 6 CS starts on the map at turn 1. The other 4 CS has the chance to be evolved from Barb-camps, and 2 of the 10 CS could rise to be a major Civ.
In my opinion, the most important would be to fix it so when a barb -> CS or CS -> Major, they get a number of units and decent city size, so they don't get crushed by others at once.

Zegangani  [author] Sep 11 @ 7:36am
Yes, it's possible. But I don't think Free Cities should directly turn into major Civs. Free City > CS > Major Civ would be a much better Developement for a Faction. I've planned a Mod that does this but it will take a long Time till I get to it, I have too many other Projects that need to be finished first.

punkdavid40 Aug 26 @ 10:07pm
@Zegangani Yes, there is a colored dotted line border, only the original 7 hexes, and you cannot cross the line, as if there are closed borders, but no option to declare war either.

I've very much looking forward to your next project. Thank you.

Zegangani  [author] Aug 24 @ 7:17pm
I'm not sure what you mean by "dead cities". Was the "dead city" area originally a Free City that got converted to a CS? that perhaps got erased by AI? You said that you couldn't enter the radius, did that radius have a (visible colored) Border?
if it's something visible/observable, could you provide a Screenshot of a "dead city" (with an imgur link or the like)? that would be very nice.

Anyway, thanks for the Infos and Feedback!
As for now, there is no Barbarian Clans Mode compatibily, where Barb Clans turn into Free Cities (instead of CSs), which then may become CSs. But I have some future plans that involve, among other things, Free Cities turn into a CS Type based on many things, such as the original owner of the city. But nothing to come in the near Future, as it's part of a bigger Project. Stay tuned!

punkdavid40 Aug 24 @ 6:21pm
The reason I stopped using the older version of this mod was because I'd often encounter "dead cities", where there is a 7 hex area where a city once was, and the game at some level still thinks there is, but there is no actual city, and you cannot enter the city radius. I'm using dramatic ages, which leads to many more free cities than other modes, and barbarian clans, and those may be related, but this last game I just played with this new version of the mod, I found dead cities pretty early in the game (Medieval).

Anyway, I'm kind of obsessed with this mod idea, because I REALLY want it to work as intended. Free cities SHOULD become city states (especially if they are former civ cities and/or are near civ cities), because they are somewhat civilized. Unlike free cities, which are really closer to a state of anarchy, where you can't deal with them except militarily, more like barbarian camps.

Thank you for working on this. It's a great way to play the game.

punkdavid40 Aug 23 @ 10:05pm
Thank you. Just grabbed. Gonna use on my next game. I'd been trying to modify the old version for barbarian clans mode.