Store Page
Dota 2>  Workshop > MoP's Workshop
This item has been removed from the community because it violates Steam Community & Content Guidelines. It is only visible to you. If you believe your item has been removed by mistake, please contact Steam Support.
This item is incompatible with Dota 2. Please see the instructions page for reasons why this item might not work within Dota 2.
Current visibility: Hidden
This item will only be visible to you, admins, and anyone marked as a creator.
Current visibility: Friends-only
This item will only be visible in searches to you, your friends, and admins.
Naughty Nilbog
Description Discussions0 Comments317 Change Notes 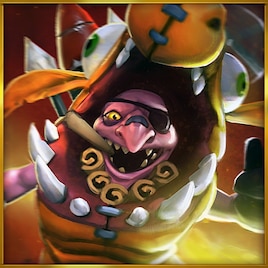 This item has been accepted for Dota 2!

spacemonkey
Offline
See all 18 collections (some may be hidden)
Description
Meet Nilbog. He's a small keen, a tinkerer, naturalist and explorer. He also has what some might describe as an "unhealthy" interest in Greevils. While most people regard Greevils with varying degrees of hate, Nilbog expresses a certain fondness for the pestiferous creatures.

He's not what you'd call normal; in fact he's been called many names in his time, from the somewhat fair assessment of "weirdo" to the less-observant "hang on, why does that Greevil have a rocket on its back...?".
Even the Techies, who many believe to be slightly insane, regard Nilbog as somewhat over-eager and single-minded in pursuit of his hobbies.

But Nilbog doesn't care! He just wants to be free to spend more time around Greevils - so much so, in fact, that he spent an incredible amount of time and effort in constructing an elaborate and detailed costume to allow him to get up close amongst them. In this way, he can explore and interact with Greevils in their natural habitat.
Just in case things go south, he has a handy rocket pack that can supply him with a quick getaway, as long as he remembers to keep its fuel levels topped up.

And what better place to find Greevils than rummaging around the loot on a battlefield? This is why Nilbog has positioned himself as an expert carrier of supplies - his costume allows him to blend in (kinda) with the local fauna, and his rocket pack can get him to where the action is, fast.
That's all a good Hero really cares about, in the end - just ignore the fact that he's a little bit odd.

If you like Nilbog, please check out our other courier, Grimoire the Book Wyrm, as well!