Store Page
Star Traders: Frontiers>  Workshop > ptarth's Workshop
This item has been removed from the community because it violates Steam Community & Content Guidelines. It is only visible to you. If you believe your item has been removed by mistake, please contact Steam Support.
This item is incompatible with Star Traders: Frontiers. Please see the instructions page for reasons why this item might not work within Star Traders: Frontiers.
Current visibility: Hidden
This item will only be visible to you, admins, and anyone marked as a creator.
Current visibility: Friends-only
This item will only be visible in searches to you, your friends, and admins. 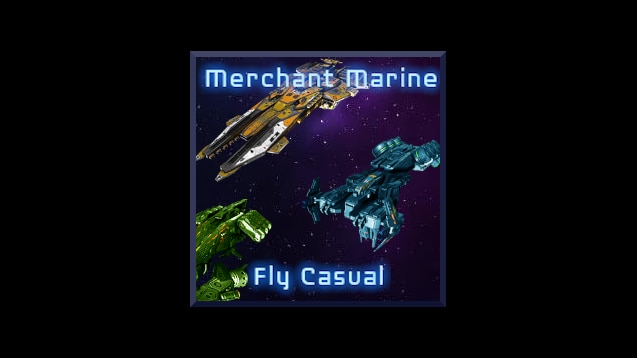 This item has been added to your Subscriptions. Some games will require you to relaunch them before the item will be downloaded.
Description
Merchant Marine: Fly Casual
Merchant Marine: Fly Casual was inspired by Space Opera and Western tales, small ships with small crews up against the universe. But has since broadened to include a larger number of changes to base ST:F gameplay. The mod aims to increase the options players have, while fundamentally retaining the gameplay of ST:F.

Merchant Marine: Fly Casual is currently under development and welcomes discussion. The SQL instructions are included and documented, so feel free to use them to understand how to do your own modding.

Priority Suggestion
Mechant Marine: Fly Casual uses SQL to modify all existing entities that meet the requirements. It should be applied after all other data modifying mods.

Quick Start Instructions
Create a new captain template
You start the game drastically under-skilled and under-crewed. You have 10 officer bunks and 6 crew bunks. You'll need to fill those officer slots by recruiting and promoting crew. You can technically add a Crew Barracks and fill your ship with an additional 18 crew, but that defeats the spirit of the mod. The crew cap was not lowered in order to allow players to play with "original" crew/officer counts if that what they want. As your crew gains experience, you'll want to give your officers second and third jobs in order to keep your dice pools high (A single level of E-Tech gets you 4 Electronics Ranks). The largest problem isn't going to be dice pools, but Talent counts. You won't have as many talents available in STF, but you will get higher level talents faster. The Corvette is setup to be a mission runner, so start out by doing Earning your Charter missions and then look to start working for a contact of your choice. Your dice pools should all be over 100% by the time you finish these early mission.

They may have cancelled Firefly, but Cpt. Reynolds flies on!

Trese Brothers  [developer] Aug 27 @ 7:21am
I've added it to our list to increase AI intelligence about using Ripcord only when badly injured. This will be helpful for the main game as well.

ptarth  [author] Aug 27 @ 7:11am
Unfortunately there are not any direct controls over how the AI uses talents. By allowing so many jobs to have access to RipCord (for the player's use), the AI also takes Ripcord (too often). The behavior was present in STF, except it was limited to just Wing Commandos. I've been continuing to try to find ways to reduce its use by the AI and/or to make it more intelligent. Ultimately it may be dropped, but I am loathe to do remove it since I like the conceptual use for crew combat mechanic balance.

PDR1987 Aug 27 @ 5:13am
An update, after I've played for quite a while. This mod is just amazing. I have only one question, the AI keeps ripchording away during crew combat, even at full health. Is this WAD?

Mauer Aug 26 @ 6:38pm
Sounds very interesting and a lot like what I've always wanted in this game, to have fewer but more meaningful crew. Now if if there only was something to have crew interactions, rapport etc. ala Fire Emblem that would make this my favorite game lol.

PDR1987 Aug 26 @ 3:37am
@ptarth
I understand. Great work, anyways! Thank you so much for your efforts.
And, wow. Trese Brothers, thanks guys for the attention and care you gave the game and us; if you can tweak the AI to handle the smaller crew better, it would be INCREDIBLE.

Trese Brothers  [developer] Aug 25 @ 1:30pm
Great to see the discussion here. I'll check in with @ptarth about the officer building limitation and perhaps we can tune up the enemy AI in both base / mod versions of the game.

I'm glad you are enjoying it. Thank you for posting.

Unfortunately due to engine and modding support limitations, the AI isn't able to effectively handle ships with the reduced crew size. AI Ship crews aren't adaptive to increases in officer count and don't build efficient officers, this results in AI Ships having terrible dice pools and absolutely destroys the AIs ability to put up a fight. Thus to retain difficulty, AI Ships can't have their crew sizes drastically modified. Changes could be made to the player side, to enforce a crew limit on the ships they can buy, but this reduces flexibility on the player engagement side, for no real gains.

Thematically, you can also consider that while your captain character may choose to fly under-crewed, the rest of the universe doesn't agree with your captain's life choices.