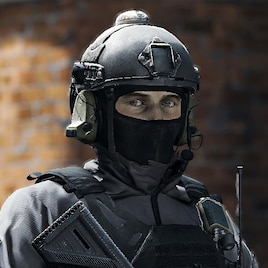 Before use, please make sure to completely delete any version of the old Kuge PMC, including GMA files

This addon is not an NPC or player model (PM), but an addon for making pictures. (Ragdoll)
I am responsible for the main production of the model Kuge
Special thanks 神秘人 Help make weight and binding
Thanks Viper MW19 gloves
Thanks Maverick86 BDU pants from MW19 And Gasmask of BOCW
Thanks cassius The Evil Within 2 Character face
Thanks Mao Long Suits
Thanks jQueary Gear from Resident Evil 8
Thanks Artyom Provide guidance and help

The services and expertise offered by PMCs are typically similar to those of governmental security, military or police forces, most often on a smaller scale. While PMCs often provide services to train or supplement official armed forces in service of governments, they can also be employed by private companies to provide bodyguards for key staff or protection of company premises, especially in hostile territories. However, contractors who use offensive force in a war zone could be considered unlawful combatants, in reference to a concept outlined in the Geneva Conventions and explicitly specified by the 2006 American Military Commissions Act. There has been controversy over whether PMCs in active combat zones should be considered mercenaries.

The services of private contractors are used around the world. PW Singer, author of Corporate Warriors: The Rise of the Privatized Military Industry, says "In geographic terms, it operates in over 50 different countries. It's operated in every single continent but Antarctica. "Singer states that in the 1990s there used to be 50 military personnel for every 1 contractor, and now the ratio is 10 to 1. He also points out that these contractors have a number of duties depending on whom they are hired by. In developing countries that have natural resources, such as oil refineries in Iraq, they are hired to guard the area. They are also hired to guard companies that contract services and reconstruction efforts such as General Electric. Apart from securing companies, they secure officials and government affiliates . Private military companies carry out many different missions and jobs. Some examples include close protection for the Afghan president Hamid Karzai and piloting reconnaissance airplanes and helicopters as a part of Plan Colombia. According to a study from 2003 the PMC industry was worth over $ 100 billion a year at that time.

According to a 2008 study by the Office of the Director of National Intelligence, private contractors make up 29% of the workforce in the United States Intelligence Community and cost the equivalent of 49% of their personnel budgets.

Mad_Mike Sep 16 @ 6:24pm
There bones are a bit messed up, and yes I have the mods required, on and installed, other then that, good!

Spicey Sep 9 @ 5:19pm
all the male PMCs dont properly hold weapons with the bodygroup tool, the females work, but the males all have the weapon sideways in their hands. Not sure if its a bug? or if i'm not doing it properly. It's a damn shame because these are beautiful and bodygrouping is way easier than welding to the hand. But alas, ill make do.

chuchu Sep 4 @ 2:15am
he ain't 100% wrong, it is quite some time that this workshop lacked of some great models like these... A possible request for the future could be the following as nobody ever dared to touch such grounds. I've noticed the great amount of vests and customizations in this pack, and this bringed me to the following idea. Nobody ever made Russian actual Special forces. Just saw some low made VDV and that's it. The idea here would be making the actual VDV from Russia, along with the actual more internal organs of it, maybe like the FSB, SOBR (Lynx, Terek, you name it.), SSO, OMON, Alpha Group, Vympel Group etc. It could be a big advantage to the ones who actually wants to use russian accurate ragdolls... In anyway, we can just request, but this could be a revolutionary idea...