Store Page
Arma 3 >  Workshop > EMSI's Workshop
This item has been removed from the community because it violates Steam Community & Content Guidelines. It is only visible to you. If you believe your item has been removed by mistake, please contact Steam Support.
This item is incompatible with Arma 3. Please see the instructions page for reasons why this item might not work within Arma 3.
Current visibility: Hidden
This item will only be visible to you, admins, and anyone marked as a creator.
Current visibility: Friends-only
This item will only be visible in searches to you, your friends, and admins. 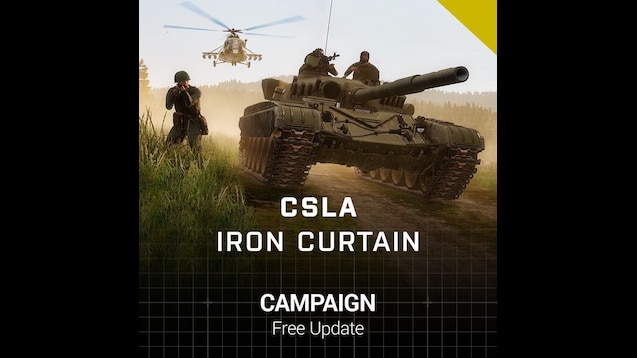 CSLA Studio
Offline
See all 31 collections created by EMSI and other people (some may be hidden)
You need DLC to use this item.

This item has been added to your Subscriptions. Some games will require you to relaunch them before the item will be downloaded.
In 1 collection by EMSI
CSLA - Iron Curtain

3 items
Description
Single player campaign IRON CURTAIN
There is a story about a father and his little son.
One day they came to a hill near the Iron Curtain.
And the little son asked his father:
"Dad, who is behind that fence?"
His father looked dreamily behind the fence and answered:
"You know... we are behind that fence..."

Czechoslovak Socialist Republic, Summer 1986
The time has come... for changes in our homeland.

Join the fight for freedom of a few insurgents, which want not to respect anymore the communist regime in their country.
Play through their story in various types of infantry missions.
Help them in fight for their cause.