Greenlight > Games > Manta Games's Workshop
Greenlight is being retired. For more information on how to submit games to steam, refer to this blog post.
This item has been removed from the community because it violates Steam Community & Content Guidelines. It is only visible to you. If you believe your item has been removed by mistake, please contact Steam Support.
This item is incompatible with Greenlight. Please see the instructions page for reasons why this item might not work within Greenlight.
Current visibility: Hidden
This item will only be visible to you, admins, and anyone marked as a creator.
Current visibility: Friends-only
This item will only be visible in searches to you, your friends, and admins.
Vitality
Description Discussions3 Announcements6 Comments564 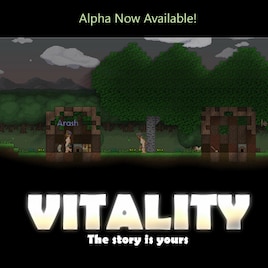 I am Chitter
Offline

View Vitality in the store

First things first, we're not dead! We have been slowly working away on the game for the past few months, progress has been slow as this project is only being developed past time. Though this is no excuse for leaving you guys in the dark, so first of all, I wanted to apologise for not posting any updates sooner!

Anyway! The good news is that we have a wealth of news and new features to announce and discuss!

In the past few weeks, we've been working hard on making Vitality the best game it can be. We've re-written a bunch of the core systems in the game to provide both performance improvements and to help improve the visual aesthetics of the game!

Here are a few of the more interesting mechanics that have been added to the game:

A big thing in Vitality for us is the idea that the world around you is dynamic and interesting. Part of this is achieved with our new Starting scenarios system. When you start a new game, you don't just spawn into the world with nothing in a random location, instead, you spawn into a mini quest with a randomly generated kit and a number of other bits and bobs.

These scenarios act as a way of immediately introducing you to the game's mechanics and also helps avoid the monotonous process of having to craft initial gear just to survive.

The very first scenario we added spawns you in a cave with limited supplies, and you have to help your NPC buddy get out! Faced with a number of immediate dangers, but at the same time with the benefit of having more advanced gear and treasures immediately at your disposal

NPC AI and the Party System

We want to make our NPC system as dynamic as possible! In order to make quests interesting, alot of our design is oriented around you teaming up with NPCs and helping them perform a task! Whether it's taking down a big Dino, or defending a town from invaders, the NPCs will be by your side to help you on your adventure!

NPCs will also help you fight in general combat scenarios :)

One of the features that will be available as powerful tool in the Industrial age is the ability to link certain utilities together! Rather than having to manually manage the flow of resources through a system, you can design mechanisms that define some industrial process!

For example, you can have a furnace and a number of chests next to each other. When the furnace has run out of fuel, it will simply pull the required fuel from the linked chest. The same applies for storing produce from these machines.

This is only a simple example, but when linking together more complex structures such as water pumps and generators, you can achieve powerful industrial systems, which can be left to tick away in the background whilst you go off and do what you want!

Check out a video of the current progress of the fluid dynamics: https://www.youtube.com/watch?v=ONl5qUOTxQ0

We've also spent time working on improving the atmosphere. This has included the addition of a dynamic ambient effects system which layers together different ambient tracks based on the environment you are in :) We hope this increases the level of immersion, and the overall vibe of the game:

Our Livestream
We hope you found these updates interesting and exciting, we are continuing to work on the game and will be showing off new gameplay on our Youtube Channel soon!

In the mean time, we livestream our Game Development on Twitch a few times a week! Find us on: http://twitch.tv/mantagamesco

I thought I would just let you guys know that we are currently streaming multiplayer development over on Twitch!

We stream quite frequently and our streams involve developer commentary and an insight into the technical nature of the game. It's a nice bit of fun!

( I will leave this message here even after the stream has ended, just to let people know about our twitch channel. )

Read More
Description
Release date: Second Quarter 2016
Vitality Alpha is currently available on: http://vitalityrpg.com/ (Please note that the current version of the game is an early-alpha and we still have a lot of work left to do in terms of adding mechanics, content and polishing the game.)

Introduction
Vitality is not just your run-of-the-mill sandbox survival game, we strive to take a successful concept and shine it under a new light! There is much more potential to use expand on these ideas and create a deeper game experience out of it. Here are some of the things we want to achieve with Vitality:
About Vitality:
Vitality is a new addition to the survival-sandbox genre, with an extreme focus on immersion and player experience. We have set-out to create a vibrant world, filled with creatures and NPCs - and a progression system allowing the player to advance both technologically and socially through the great ages of civilization. Survival is no longer just a story of a man in the wilderness, but a history of leadership and triumph. No longer are you limited to the axe over your shoulder, or the ground beneath your feet, but instead, utilize the world's most powerful resource.. People!

Vitality isn’t just your run-of-the-mill sandbox game. We’re taking a basic concept and exploring the new and interesting potentials found within. We’re creating an environment in which the player can really feel connected with the world – able to experience change as it happens. Follow your friends into an advancing world; unlock new mechanics as you play. You thought you were just out here to survive? That’s what life is all about, right? No one really takes the time to capture the true magic of what it means to live. Your world isn’t simply a matter of dirt and stone, but a sandbox: an evolution filled with dynamic traits, a thriving economy, and the wrath of prosperity and failure!

We aim to create a game in which the player feels connected with the world – where with each time you play, you come across new events, new personalities, and new ways of playing. The sandbox-esque elements are merely the execution; they’re building blocks which allow us to build Vitality into the full and deep RPG we want it to be!

We wanted to do something different with Vitality. We took a genre that people love, following inspiration from Minecraft and Terraria; but began to build upon it in our own way. The randomly-generated world is merely the execution; a building-block for which we can build our game on top of. We have a whole desire to create a game focused around the lives of the player, and not just let the player be another lonely soul, drifting around the world aimlessly, but to fit in, and watch the world shape around them.
We have done this by opening up a world of possibilities, focusing on NPC interaction, Quest systems and NPC villages. The NPCs advance in their own little way as you play, building up their villages as time passes on, and new mechanics are introduced along the way.
Naturally, it won't just be this. You will still have the building mechanics you have come to expect, as well as many other fun quirks such as RPG leveling systems and skill-tree's which will be advanced upon in later versions of the game.

Vitality is in its infancy at the moment and we still have a lot of content to add; however, you can join us on our journey at http://vitalityrpg.com/ where the first release of the game has recently been launched!

A Note about platforms:
Vitality is currently only available on Windows, however we are looking into porting the game to Mac and Linux in the future.

Alpha and future releases:
Vitality is currently in early-alpha. The price of the game is currently $14.99. This is more expensive than the final release of the game will be, however this price reflects the original value of the Alpha-access tier on our kickstarter campaign. This also allows us to increase our funding for the project, which in-turn allows us to add more to the game than we otherwise would have been able to add.

The final version of the game will be available for somewhere in the region of $6.99 to $9.99 depending on the amount of content in the final game, sales and the overall reception of the final game.
Popular Discussions View All (3)

Vitality Q and A - Ask us anything
Manta Games

THIS GAME IS NOT DEAD, THE DEVS ARE JUST SILENT
TollsU7
< >
564 Comments

VerMeister Sep 9, 2016 @ 1:39pm
Looks like terraria and minecraft put together

Kanrie Aug 26, 2016 @ 2:27pm
whoever think this game is dead, check the forum of it, the developers post every single thing there, but they take forever to post it on steam or their own website

You can still watch the game dev process on their Twitch:
https://www.twitch.tv/mantagamesco

Vitality has been Greenlit and is now listed in the Steam store. For the latest information, purchase options, and discussions for Vitality, please see it on the Steam Store or in the Steam Community.
Visit Store Page
For more details Visit Community Hub
For latest discussions
If you really, really want to, you can continue to the Greenlight page. Information on this page may be out of date, since all the action has moved to the areas noted above.