Store Page
Left 4 Dead 2 >  Workshop > Alex_D #NoWar's Workshop
This item has been removed from the community because it violates Steam Community & Content Guidelines. It is only visible to you. If you believe your item has been removed by mistake, please contact Steam Support.
This item is incompatible with Left 4 Dead 2. Please see the instructions page for reasons why this item might not work within Left 4 Dead 2.
Current visibility: Hidden
This item will only be visible to you, admins, and anyone marked as a creator.
Current visibility: Friends-only
This item will only be visible in searches to you, your friends, and admins. 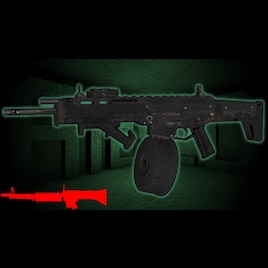 This item has been added to your Subscriptions. Some games will require you to relaunch them before the item will be downloaded.
In 1 collection by Alex_D #NoWar
Alex_D's compiles: firearms

The Magpul Masada modular rifle design was sold to Bushmaster, who would produce semi-auto versions, and Remington, who would produce full-auto ones. This rifle was to become a weapon of choice of the US Armed Forces and civilian enthusiasts, but the combination of the cancelled Individual Carbine competition, inflated price tag, recalling of the Bushmaster rifles due to a defect allowing the rifle to fire automatically, and Remington's bankruptcy ultimately sealed the ACR's fate.

Replaces the M60 (model and reloading sounds)
Long have I wanted to make a black MW2 ACR. It just wasn't really worth it. Change the iron sights to make it more different? Sure, but not unique enough. Add a suppressor? Been done already. Compile it for AK or SIG? Meh. Ah, screw it then, gotta check out some anims. Man, that weird "MG36" is a waste of a fine animation set, I wonder if I can compile a SCAR on those. Or...

Anyway, here's an ACR with a very extended magazine. Killing 40 enemies through cover unlocks a 50% increase in magazine capacity in MW2; guess to unlock a 120-round drum you'd have to grind 240 penetration kills. This rifle also employs some Mall Ninja Pro as it has a small laser aiming module from Black Ops II (seeing that BO2 borrows the Vector model) and an angled foregrip from Ghosts (as it is made by IW and shares many assets). The AFG was necessary so that the character doesn't hold thin air, just like my older MK46 mod. The iron sights are from the FAMAS, and the top part of the magazine is from the M16A4. And I removed the rails from the handguard because it doesn't have any static shadows for once.

Copyright 2021 Alex_D. This item is not authorized for posting on Steam (or anywhere else, unless fully credited), except under the Steam account named Alex_D_Vasilkov.

Alex_D #NoWar  [author] Jun 27, 2021 @ 10:49am
I guess I can. The only thing that really stops me is having to manage reloading sounds again, and this probably is the least exciting part of weapon skin modding.

Alex_D #NoWar  [author] Jun 3, 2021 @ 5:29am
The Last Stand update showed that, despite some haters' wishes, this game is far from being left for dead. The update in question brought many features for the modders to make their mods even better, so why stop modding this game?