Greenlight > Games > The Journeyman Project's Workshop
Greenlight is being retired. For more information on how to submit games to steam, refer to this blog post.
This item has been removed from the community because it violates Steam Community & Content Guidelines. It is only visible to you. If you believe your item has been removed by mistake, please contact Steam Support.
This item is incompatible with Greenlight. Please see the instructions page for reasons why this item might not work within Greenlight.
Current visibility: Hidden
This item will only be visible to you, admins, and anyone marked as a creator.
Current visibility: Friends-only
This item will only be visible in searches to you, your friends, and admins.
The Journeyman Project: Pegasus Prime
Description Discussions1 Announcements7 Comments260 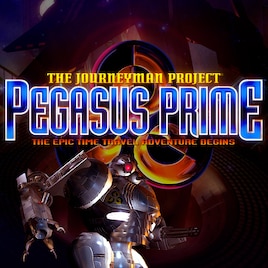 View The Journeyman Project: Pegasus Prime in the store

We passed submission. Should only be a matter of days now.

Hey folks, programmer Keith Kaisershot here. Sorry it's been so long without Steam-specific news-- don't worry, we haven't abandoned this project-- but I think it's OK with Presto if I post candidly here, so here's an update.

We've reached release candidate status, meaning, the code for this first release is more or less final, barring any last-minute bugs or issues that may crop up.

Unfortunately the only release date I can provide is "soon," and here's why: Because Pegasus Prime uses the open source ScummVM engine, and as a result due to the way Steam support must be implemented, there is an issue with how the game talks to the Steamworks API that is currently holding up the release until Valve puts out a fix. Getting through to Valve over the noise of the Internet can be challenging, so last month I flew to Seattle to personally meet with a member of the Steamworks development team and was thereafter put in touch with them to help iron out a fix. From talking with them, it seems they've identified the problem and have a solution in the works for the next Steamworks update-- they have been very helpful and cooperative. I imagine it's only a matter of weeks now, but I am not privy to Valve's release schedule so naturally that's only speculation on my part. Sorry but I don't have any more information than that.

Here's some more good news: During development of this version, we discovered backups of the original Japanese PSX gold master discs, so in the meantime a couple things specific to that version have already been squeezed into the game as well.

Again, sorry it's been a while since the last "official" update-- I'm pretty frustrated about that too. It feels lately like we're as punctual with our updates as Gage is showing up for work. :P It's been a long time since we got Greenlit and I know waiting isn't fun, but in that time we've added a bunch of fun new stuff that I hope you'll find worth it. I'm really excited for you folks to check out these new features and additions and I really hope the game is in your hands by early to mid 2017.

Read More
Description
Release date: 20 February 2017
The Epic Time Travel Adventure Begins!
Experience the origin of the acclaimed Journeyman Project series, remade into this enhanced special edition. You are the time-traveling Agent 5, in a desperate mission to stop a mysterious terrorist behind a series of ‘rips’ in the time-space continuum. Immerse yourself in a series of spectacular worlds, encountering fascinating challenges and memorable characters along your way. Produced by award-winning developer Presto Studios, it’s a non-linear race against the clock to stop the deadly temporal distortion waves before you — and your world along with it — become history!

The Journeyman Project  [author] Feb 21, 2017 @ 9:49am
The Mac version hasn't been forgotten -- it will require additional work because of the way recent versions of OSX (now macOS) manage its applications.

Alaya SaDiablo Feb 20, 2017 @ 10:30am
Voted for the greenlight, waited for years, discovered immediate betrayal when the launch day came... Why is this ONLY FOR WINDOWS?

Castodas Feb 17, 2017 @ 5:41pm
I think we need to pray to the Lord Gaben that this game gets released. Everyone, please bow your heads for a moment of silence. =P

Fey🥀 Feb 7, 2017 @ 9:43am
oh gosh, the journeyman project! I just randomly remembered this game existed in my youth and was driven by a sudden need to own it again. I hope this gets on the store soon, sort of frustrating to see it may just be waiting on someone at steam pushing out a bit of code :(

The Journeyman Project: Pegasus Prime has been Greenlit and is now listed in the Steam store. For the latest information, purchase options, and discussions for The Journeyman Project: Pegasus Prime, please see it on the Steam Store or in the Steam Community.
Visit Store Page
For more details Visit Community Hub
For latest discussions
If you really, really want to, you can continue to the Greenlight page. Information on this page may be out of date, since all the action has moved to the areas noted above.