Greenlight > Concepts > Seiryuu's Workshop
Greenlight is being retired. For more information on how to submit games to steam, refer to this blog post.
This item has been removed from the community because it violates Steam Community & Content Guidelines. It is only visible to you. If you believe your item has been removed by mistake, please contact Steam Support.
This item is incompatible with Greenlight. Please see the instructions page for reasons why this item might not work within Greenlight.
Current visibility: Hidden
This item will only be visible to you, admins, and anyone marked as a creator.
Current visibility: Friends-only
This item will only be visible in searches to you, your friends, and admins.
Spectrum Seeker: A Quest for Color
Description Discussions0 Comments5 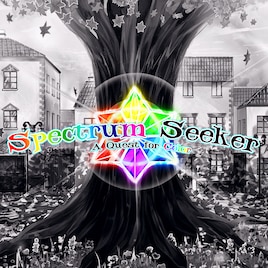 Seiryuu
Online
Description
About
Spectrum Seeker: A Quest for Color is a 2D RPG that takes place in Prisma, a land that had its color stolen by the Faded. Your goal is to find the Spectrum Fragments and restore the Worlds Color. You'll start off in a black and white game and progressively see the world itself change into a vibrant and beautiful one.

Story
Over a millennia ago, a terrible struggle began between the people of Prisma and mysterious Faded, who threatened the world of its color. To counter this threat the people of Prisma united and marched to war. But the Faded proved difficult to defeat as the war raged on. Several years ago the capital city of Gamut fell to the Faded and the Spectrum Star was shattered into six fragments and scattered to protect the power of Color. Those who survived the battle of Gamut when the Star shattered were imbued with some of it’s essence, gifting them the power to manipulate Color. They were since known as The Gifted, given powers that could be handed down to their descendents.

One such Gifted, Seiryuu, is now ready to embark on his journey to follow in the footsteps of his hero Leon, and leave Azure Village to recover the crystal shards. Joined by best friend Arkonis their journey will take them across several different landscapes from futuristic technology, to lands rooted in the power of the earth. They learn along the way the Faded are not alone as a mysterious cult has emerged who are working with the Faded.

The Faded are preparing to strike when their shattered foes are most vulnerable. With the source of the Faded threat still unknown to them Seiryuu and his companions seek to unravel the mystery behind the cult’s involvement and restore the Spectrum Star.

SweetFishsticks Jun 28, 2014 @ 9:16am
looks promising. I wonder what the characters are going to look like