Greenlight > Games > 2xMilk's Workshop
Greenlight is being retired. For more information on how to submit games to steam, refer to this blog post.
This item has been removed from the community because it violates Steam Community & Content Guidelines. It is only visible to you. If you believe your item has been removed by mistake, please contact Steam Support.
This item is incompatible with Greenlight. Please see the instructions page for reasons why this item might not work within Greenlight.
Current visibility: Hidden
This item will only be visible to you, admins, and anyone marked as a creator.
Current visibility: Friends-only
This item will only be visible in searches to you, your friends, and admins.
Tiny Kleptos
Description Discussions1 Announcements1 Comments40 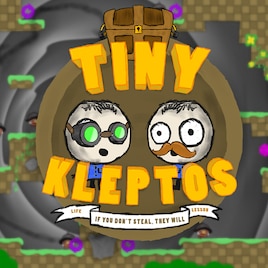 2xMilk
Offline
See all 3 collections (some may be hidden)
Recent Announcements View All (1)
Tiny Kleptos has been Greenlit!
August 31, 2015 - 2xMilk

This is super exciting! I'm getting back at it, and started a significant overhaul immediately after the greenlight. The art is being updated, and I'm hoping to get into early access and get people playing it for feedback and improvement in September.

Thanks for your votes everyone!

Tiny Kleptos is a fast paced couch-style local co-op vs game for up to four players!

Remember multiplayer in the 90's? How when you played together you were close enough to punch a kidney or pull someone's hair? Tiny Kleptos brings coop action, and all the friendly couch violence that comes with it, as you fight unending hordes of angry and discarded toys in a battle for couch owning supremacy.

Run, jump, and blast to collect and deposit the most gems, presents, and candy as you battle your closest friends and soon to be frenemies across multiple unique and hand drawn worlds.

Drop into single player mode to blast away to reach a new high score and unlock new levels, disguises, and content. Post scores to Steam Leaderboards and unlock Steam Achievements.


Tiny Kleptos is a gamepad oriented game, but it can be played with a keyboard just as well. In fact, you can even go two players up on a single keyboard, if you don't mind the occasional and somewhat awkward slap fight.
Popular Discussions View All (1)

Thanks for the thoughts everyone.
< >