Store Page
Rust>  Workshop > b3d's Workshop
This item has been removed from the community because it violates Steam Community & Content Guidelines. It is only visible to you. If you believe your item has been removed by mistake, please contact Steam Support.
This item is incompatible with Rust. Please see the instructions page for reasons why this item might not work within Rust.
Current visibility: Hidden
This item will only be visible to you, admins, and anyone marked as a creator.
Current visibility: Friends-only
This item will only be visible in searches to you, your friends, and admins.
Brothers of Fire | Wooden Door
Description Discussions0 Comments37 Change Notes 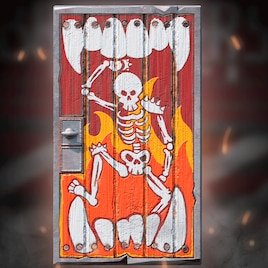 THE CULT OF FIRE: A RUST TALE - CHAPTER ONE -

The wind howled through the canyons, kicking up dust and debris, making the trek into the desert all the more perilous. The flames of the torches fluttered wildly, casting long, warped shadows on the sheer stone surfaces on either side of us. Banchoo yelled out from ahead, his voice barely a whisper on the screaming wind. He had taken point being that it was him who suggested this route, and assured us that he'd taken it a dozen times without ever seeing any of...THEM.

But very few HAD seen them, and even fewer lived to tell the tale.

There were some who considered them a myth. A story conjured up by clever scavengers to keep people out of the sulfur-rich canyons so they could keep the bounty to themselves. But I knew better. I knew more than I ever needed to know about "The Brothers". At least enough to know that Banchoo was playing a dangerous game, and that I was a damned greedy fool for coming along for the ride. And from the moment we passed the first of their primitive scrawlings - crude skulls, bloody hand prints, and fire. Always Fire - my stomach churned with dread and regret. We had entered their "territory",

Banchoo held up his torch and and waved it from side to side; his signal to move forward.

Tiger and Lilith lowered their weapons and moved in his direction when, suddenly, his torch fell to the ground, kicking up sparks that skittered along the danced along the desert floor. There was the sound of muffled gunfire in the distance. Tiger raised his AK-47, but, before he could fire a single shot, there was a loud crack, like a thunder clap, and then the back of his head exploded outward. I felt the warmth of his blood splash across my face as his body dropped before me in a lifeless heap. I quickly dropped beside it, using it as cover as the bullets pelted Tiger's body and whistled overhead.

Lilith turned to run, but barely managed to get twenty feet before she was consumed by a crimson mist as her body was shredded by heavy weapons fire. The bits that remained of her fell to the ground in a series of wet slaps as if someone were pouring a bucket of innards onto a sidewalk.

I wiped Tiger's blood away from my eyes, shouldered my rifle, and stared down the sites into a gaping maw of deep and terrible darkness that seemed to know no end. All was eerily quiet, save for the high-pitched wail of the wind.

That's when I felt the gentle footsteps around me. A flare hissed and a shower of red sparks rained down upon me as I rolled onto my back and saw them. The one that held the flare flashed a smile of rotten teeth and bleeding gums. And, with that, he lifted his boot and brought it down upon my face with such force I swear it felt as though he'd kicked me clear through to the other side of the world. There was pain, then a strangely comforting sense of warmth before all was inky blackness.