Greenlight > Games > Bacon Bandit Games's Workshop
Greenlight is being retired. For more information on how to submit games to steam, refer to this blog post.
This item has been removed from the community because it violates Steam Community & Content Guidelines. It is only visible to you. If you believe your item has been removed by mistake, please contact Steam Support.
This item is incompatible with Greenlight. Please see the instructions page for reasons why this item might not work within Greenlight.
Current visibility: Hidden
This item will only be visible to you, admins, and anyone marked as a creator.
Current visibility: Friends-only
This item will only be visible in searches to you, your friends, and admins.
Letter Quest: Grimm's Journey
Description Discussions5 Announcements22 Comments2737 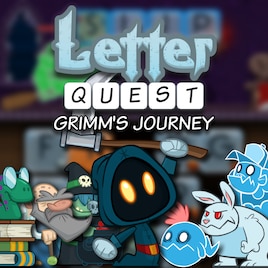 I wanted to say a huge thank you to everyone that has left comments, provided support and encouragement - it's been a ton of work to get to this point and your kind words have made the journey really awesome!

I can't wait for everyone to be able to play Letter Quest on Steam!

After more than six months, Letter Quest has finally been greenlit!

Thank you so much to everyone that voted, supported the game, offered feedback, and helped test new features - you are all so awesome! I'm truly lucky to have met so many helpful and supportive people!

Now work begins on implementing all of the nifty Steam features!

For those of you that already purchased the game through IndieGameStand, the Humble Store, or the Humble widget - you will get a Steam key once I finish up all of the Steam integration and the game is approved for sale on Steam.

Thanks again, and stay tuned for more awesomeness! :)

Letter Quest is a turn-based RPG where players attack monsters by spelling words. But be careful since the monsters fight back by creating different letter tiles such as poison, plague, stone, and whirlwind, or steal your health, heal themselves, use critical attacks, and much, much more!

Letter Quest is already out for PC and Mac. For more info and to buy the game (which includes a Steam key once it's on Steam) visit http://www.letterquestgame.com.

FEATURES
• 40 stages, with 4 unique ways to play each one
• Five separate areas, each with unique art and music tracks
• Tons of upgrades, books, potions, special items and weapons to help you on your journey
• Over 30 monsters to fight
• Boss monsters with unique abilities
• 70 quests to complete
• 52 achievements

Although Letter Quest was originally created as a mobile game, we definitely didn't want the desktop version to feel like a mobile port, so we spent four months making the changes for the desktop version!
● A world map with several areas
● 8 unique music tracks
● Different background art for each area
● High-resolution textures that look great even on 4K monitors
● Complete rebalancing of the entire game, including how items are unlocked and upgraded
● Difficulty and item cost tweaks
● Reworked UI
● Resolution options
● Hot-key support (configurable in-game)

Originally posted by Shaun Musgrave, Touch Arcade (4.5 stars out of 5):
You'd be silly not to check this game out

Originally posted by Jennifer Allen, 148Apps (4 stars out of 5):
Letter Quest: Grimm’s Journey is a blast to play

Originally posted by Evan Killham, Cult of Mac (5 stars out of 5):
It’s addictive and cute, and it’s deep enough to keep you busy for quite a while

Originally posted by Michael McConnell, macgasm.net:
This game is fantastic

Originally posted by @Cokamouse, estugame.com (10 out of 10):
a fantastic game

Originally posted by Michael Klein, The Clarion:
It is addictive and nearly impossible to put down

About Us
Bacon Bandit Games is an indie game studio made up of two Canadian guys, Mark Smith and Jake Macher, that love to make games! Letter Quest is our first game, but we have many more we'd love to make!
Popular Discussions View All (5)

Kotyoh Apr 23, 2016 @ 12:30pm
I have the game myself. It's very fun, addicting and it's suitable for all ages, meaning you don't have to be a certain age to play this game. The art style fits the gameplay perfectly. The soundtrack is both nostalgic and awesome ( some songs have 8 bit tunes in it ). It's not expensive neither with a 8.79 $ price. Overall, if I were to rate this game from 1-10, i'd rate it 8/10. The way you're going, you guys are gonna have a huge buisness. I played it a while ago on another pc, but this other pc won't run it. Still, this is a very fun game. I highly recommend it to anyone.

Bacon Bandit Games  [author] Dec 17, 2014 @ 6:12am
Milky Oranges: you should already have a key available in your Humble account - if you don't, you should contact Humble Bundle support and they should be able to get it sorted out for you.