Store Page
RimWorld >  Workshop > Tittymcswaggy's Workshop
This item has been removed from the community because it violates Steam Community & Content Guidelines. It is only visible to you. If you believe your item has been removed by mistake, please contact Steam Support.
This item is incompatible with RimWorld. Please see the instructions page for reasons why this item might not work within RimWorld.
Current visibility: Hidden
This item will only be visible to you, admins, and anyone marked as a creator.
Current visibility: Friends-only
This item will only be visible in searches to you, your friends, and admins. 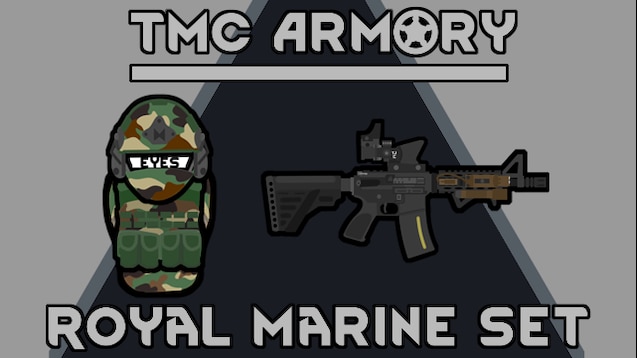 Tittymcswaggy
Offline
See all 242 collections (some may be hidden)

- This mod was commissioned by ThisIsKetts.

Lore stuffs
- The population of the Rim discovered some blueprints and tech of the old world. A rifle that is fairly similar to the Assault Rifle they have been using but with a shorter barrel and comes with some extra attachments, there is also a set of combat uniforms and armor that was used by the " Royal Marine Commandos ", people could have mistaken that the Empire used this tech back then and are now spreading the tech among the planet.

- TMC Armory are mods about weapons and apparel for industrial and (Soon...) spacer era with the focus on "tacticool-ness". The weapons can be used with Combat Extended or any weapons from the Vanilla Expanded mods since the stats are based around how their mods are balanced.

Q : Is it compatible with Combat Extended ?
A : Yes . This mod is CE compatible by default.

Q : Where can I find these ?
A : You can find them in the machining table and tailoring table after researching Flak Armor.

Q : Where can I contact you for commissions ?
A : If you need some textures made by me. You can contact me by Steam or find me on Rimworld Discord [discord.gg]. I can do weapons, apparels and animals but also willing to try new things :)

- Arts and XML made by me , Tittymcswaggy .

- Rimworld is owned by Tynan Sylvester.

**Please do not upload my mods on other websites without my permission.**
< >
9 Comments

Mod conflict, for example- I got a number of mods CE compatible that I've never had any issues with, and the order appears to be proper.

ThisIsKetts May 1, 2021 @ 6:03pm
@SheepShagger it based of the new Royal Marine Commandos uniform and gear
https://www.royalnavy.mod.uk/news-and-latest-activity/news/2020/june/27/200626-royal-marines-new-uniform