Greenlight > Games > batterystaplegames's Workshop
Greenlight is being retired. For more information on how to submit games to steam, refer to this blog post.
This item has been removed from the community because it violates Steam Community & Content Guidelines. It is only visible to you. If you believe your item has been removed by mistake, please contact Steam Support.
This item is incompatible with Greenlight. Please see the instructions page for reasons why this item might not work within Greenlight.
Current visibility: Hidden
This item will only be visible to you, admins, and anyone marked as a creator.
Current visibility: Friends-only
This item will only be visible in searches to you, your friends, and admins.
20XX (previously Echoes of Eridu)
Description Discussions4 Comments207 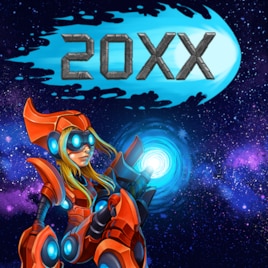 batterystaplegames
Offline
See all 21 collections (some may be hidden)
Kickstarter

View 20XX (previously Echoes of Eridu) in the store

Store page
Description
Release date: January 2015
20XX (previously ECHOES OF ERIDU)
is an action-platformer built to play like Mega Man X and replay like your favorite roguelikes. The goal of this project is to produce a game that's co-op friendly and highly replayable without sacrificing tight, satisfying action-platformer gameplay. It's targeting Windows first with plans to port to Mac/Linux post-release. (Maybe even consoles!)

Replayability is one of our core goals with 20XX; keeping the experience fresh is important to us. You get to choose from two (FOUR if we hit our 30k stretch goal!) completely different characters with their own playstyles. You get to play through entirely different levels every time you play -- the challenge set constantly shifts and you'll have to adapt to whatever the game throws at you.

THE STORY
The Story in Echoes is that S**t Has Gone Crazy and You're Our Last Hope. In the distant past (2045), a legendary inventor working for EZN, the world's largest online retailer, creates the Enterprise NeuroKinetic Intelligence (ENKI) to help with simple sorting jobs around the factory. ENKI gains sentience and accidentally starts a robot revolution. Fast forward to 2090. ENKI feels really, really bad about wiping out humanity, so he tries to empower the last few survivors to fight back (that's you!) by turning them into robo-man hybrids. ENKI resides in the ancient shipping facility of Eridu, floating high in orbit somewhere above Earth. If you can reach Eridu via a network of clumsily designed teleporters connecting EZN's various facilities, humanity might be safe -- for now.

THE ARSENAL
ENKI has designed over 100 RoboSapient Alteration Blueprints for use in the ARSENAL (Automatic RoboSapient Equipment & Navigation Assistance Library). He's done a poor job of making sure the blueprints don't get lost, so you'll have to find them yourself to unlock their powers. You can select unlocked ARSENAL pieces at the start of a playthrough to radically change the way the game plays.

ENKI realizes that not all hybrids have great aim, so he's designed a weapon that shoots in every direction at the same time, but for awful damage. Want a giant plasma sword for an arm? Okay. You die a lot while running away, so he's made you a gun that shoots backwards. Want a mode that sets your max HP to 1 and makes you deal insane damage? There's an acc for that. We're pulling out as many stops as we can think of with the ARSENAL system. You're gonna like the way you play. I guarantee it.

THE POWERUPS
We might be making too many items for this game. In addition to the over 100 ARSENAL unlocks, Echoes has over 100 special weapons and in-game passive pickups to collect in a playthrough.

At the end of every level, you'll get a new special weapon off of the boss. Maybe it'll stop time. Maybe it'll turn everything in the room into something else. Maybe it'll warp you into a different dimension, or just shoot fireballs. Who knows?

During levels, complete challenges in side areas to obtain powerful passives that alter your character and the way the game plays. Enter your insane hypermode at the drop of a hat, but only for half a second. Find a faerie helper who will make fun of you and also sometimes block shots. Pick up SO MANY SPEED ITEMS and dash in midair. Use your newfound powers to go find more!

THE CHARACTERS
NINA - A mild cow scientist who had nothing left to lose after her family was torn apart in the war. Nina traded half her humanity for a Buster arm full of vengeance, which seemed like a pretty good deal at the time. Not like there are many cows left to milk with her now-missing hand, anyway. Obliterates foes from range.

ACE - One of the few humans happy about the robot uprising -- Ace finally has an excuse to use his blade again. Previous occupation: unknown, but presumably involved slashing. Current occupation: known. Definitely involves slashing. Swiftly deals with adversaries up close.

THE LEVELS
Levels are built from chunks, chunks are built from bits, and bits are built by the Grand God of Randomness, srand(t). The short version here is that the game shifts from precise platforming to intense combat in a blink and does so in new ways all the time. Each level adheres to a certain mashup of themes with its own set of mechanics and enemies. You'll have an idea of what CAN come at you but no idea how it WILL.

If you do a little thought experiment and guess what would happen if Google or Amazon were able to research whatever it wanted for the next 40 years and then crumble, you might be able to guess some of our level themes:

Three of these are done! Help us flesh out the rest.

Thanks for reading! We'll make you proud.
Popular Discussions View All (4)

Are 2- games coming back?
Mqximoh

it's a good and nice game i like
StrongCoi

hurstshifter Mar 9, 2015 @ 11:51am
Played this at PAX East this past weekend and it was phenomenal. The best indie game at the show hands down.

ThePatriarchy Oct 8, 2014 @ 2:11pm
im not even going to pose this as a question or a plead valve, you WILL add this. YOU WILL
ADD THIS! seriously to me this feels like the megaman x game that never got made. THIS GAME NEEDS TO EXIST ON STEAM IN FULL!!!!!!!! then i will pay all of the money

20XX (previously Echoes of Eridu) has been Greenlit and is now listed in the Steam store. For the latest information, purchase options, and discussions for 20XX (previously Echoes of Eridu), please see it on the Steam Store or in the Steam Community.
Visit Store Page
For more details Visit Community Hub
For latest discussions
If you really, really want to, you can continue to the Greenlight page. Information on this page may be out of date, since all the action has moved to the areas noted above.