Greenlight > Games > triplebtitles's Workshop
Greenlight is being retired. For more information on how to submit games to steam, refer to this blog post.
This item has been removed from the community because it violates Steam Community & Content Guidelines. It is only visible to you. If you believe your item has been removed by mistake, please contact Steam Support.
This item is incompatible with Greenlight. Please see the instructions page for reasons why this item might not work within Greenlight.
Current visibility: Hidden
This item will only be visible to you, admins, and anyone marked as a creator.
Current visibility: Friends-only
This item will only be visible in searches to you, your friends, and admins.
Popup Dungeon
Description Discussions11 Announcements3 Comments400 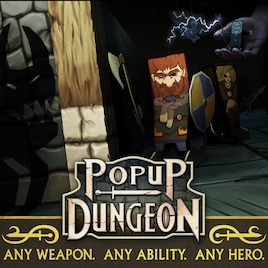 triplebtitles
Offline
See all 94 collections (some may be hidden)
Kickstarter

View Popup Dungeon in the store

Popup Dungeon has reached its $80,000 goal on Kickstarter with 4 days left to go in the campaign. Thanks to everyone who pledged and helped spread the word! We'll do everything in our power to make the best game we can possibly make for you. <3

Thanks for voting for us, everyone! It took our last game, Ring Runner 399 days to be Greenlit. Popup Dungeon was Greenlit in just 11 days!

With your support, we'll bring Popup Dungeon to release as fast as possible. You can get involved by backing us on Kickstarter!

Read More
Description
Release date: Early 2016
Popup Dungeon[www.popupdungeon.com] is a roguelike dungeon crawler for PC, Mac, and Linux that lets players create any weapon, any ability, any enemy, and any character they can imagine. It’s a papercraft version of an enchanted board game with tactical, turn-based RPG gameplay in the vein of Final Fantasy Tactics. It can be challenged alone or through hot seat or online multiplayer and is scheduled for release in 2016. (From Triple.B.Titles[www.triplebtitles.com], the makers of Ring Runner)

KEY FEATURES
GAMEPLAY
The game play is something like Final Fantasy Tactics or X-Com meets a Dungeons and Dragons board game. It's turn-based and the movement is handled on a simple grid. While Popup Dungeon will not be "twitch-based" or require lightning reflexes, we hope to make the action as lively as possible, with fast-paced, decisive combat.

It features all manners of game mechanics you can expect from games like these, and maybe even some you don't expect! The extensive customization and user-creation system will allow players to put nearly any strategy they can imagine into effect.

PREMISE
Long ago or yet to be, a Wizard from another world stabbed his tower into the side of the Earth like an immense dagger. It pierced into stone and time, deeper than anyone can ever dig. The only way in is through portals scattered around the world. These portals are disguised as enchanted board games, and they come with an invitation:

“Come, morsels. Your bodies do not interest me; it is human imagination which I invite into my domain. Only the greatest of you will reach the high spire of my lair, now buried deep in the roiling rock. And I will be waiting, fork in hand, to devour the banquet of your creativity with a side of wits.”

MORE FEATURES
For tons more information, please visit our KICKSTARTER page, our development[www.popupdungeon.com] blog, or watch our videos above!

is this game just dead?
Flippy

Gatherer Thompson Apr 2, 2017 @ 3:15pm
Work is still going on, and the dev(s?) are keeping updates going on the Kickstarter page.. I didn't back the game, but I love Ring Runner so thought I'd check this out, and am glad to have discovered work is ongoing!

Popup Dungeon has been Greenlit and is now listed in the Steam store. For the latest information, purchase options, and discussions for Popup Dungeon, please see it on the Steam Store or in the Steam Community.
Visit Store Page
For more details Visit Community Hub
For latest discussions
If you really, really want to, you can continue to the Greenlight page. Information on this page may be out of date, since all the action has moved to the areas noted above.