Store Page
Stellaris>  Workshop > Mial42's Workshop
This item has been removed from the community because it violates Steam Community & Content Guidelines. It is only visible to you. If you believe your item has been removed by mistake, please contact Steam Support.
This item is incompatible with Stellaris. Please see the instructions page for reasons why this item might not work within Stellaris.
Current visibility: Hidden
This item will only be visible to you, admins, and anyone marked as a creator.
Current visibility: Friends-only
This item will only be visible in searches to you, your friends, and admins. 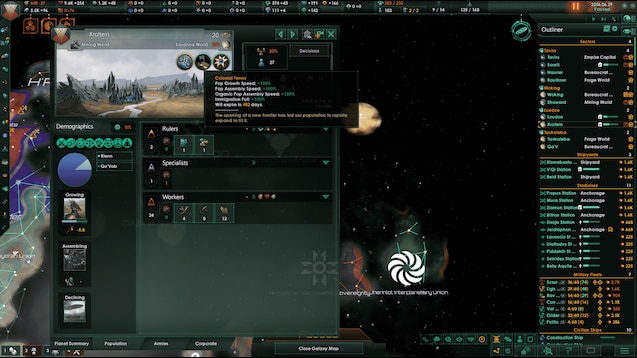 Mial42
Offline
See all 136 collections (some may be hidden)

This item has been added to your Subscriptions. Some games will require you to relaunch them before the item will be downloaded.
Description
This is a mod that is designed to rebalance growth and conquest so as to keep the benefits of the new systems (empire-wide pop penalty and planetary logistic growth) in 3.0 while mitigating the downsides.

What this mod changes and adds:
1) Planetary logistic growth/carrying capacity and the empire-wide pop penalty are both removed by default, although you can add the empire-wide malus and higher LG growth ceiling back in via sliders.
2) The required growth and assembly progress for growing or building a new pop is now a flat 250 rather than 100. This effectively makes growth and assembly 40% as fast.
3) New colonies, including your capital at the start of the game, get +200% growth, assembly speed, and organic assembly speed, for 20 years. This is so that new colonies actually develop reasonably quickly despite the slower overall growth, and also makes traits like rapid breeders less powerful at the start of the game (although they're still quite strong over all). This modifier can only be applied once per planet (so no cheesing it by abandoning colonies and recolonizing) and is removed by conquest. Does not apply to habitats for non-Void Dweller empires.
4) Conquered planets get -50% growth and assembly for 10 years. This stacks, so a particularly war-torn planet that changes hands multiple times within 10 years can have growth crippled for a long time. Does not apply to genocidal empires.
5) Liberated planets which were originally colonized by the conqueror instead get large boosts to happiness, output, and lowered empire sprawl from pops for 10 years. Does not apply to gestalt empires.
6) The "recently conquered" pop modifier has been overwritten to be much more impactful. Now in addition to the -20% happiness, a recently conquered pop also gives 35% less output from jobs, has -35% governing ethics attraction, costs 35% more sprawl, and if enslaved, has 35% more political power.
7) Normal planet capital buildings generally require less pops (0 => 10 => 20 => 40 instead of 0 => 10 => 40 => 80). They also give one less enforcer job per level after level 2 (unnecessary due to fewer pops) and the machine equivalents give one less hunter-seeker per level after level 2. Does not apply to the imperium capital or special capitals such as the resort/slave worlds. Hives major capitals still require 40 pops.
8) Assembly from capital buildings has been changed. In vanilla, higher level capitals give more roboticists/replicators to synths/machine empires. This encourages micro by resettling to get to those higher capitals as quickly as possible. Instead, all synth capitals will get +2 pop assembly (equivalent to 1 roboticist) and -50% pop growth, but there are no additional replicators or roboticists from higher level capitals. Machines get +1 assembly for free from capitals once they research the Mega Assembly tech. The effect of this is that synths and machines assemble faster then vanilla on smaller colonies but slower on larger colonies, and there's no micro incentivized.

What are the effects:
1) There are fewer pops in the galaxy late game, leading to better performance, keeping the primary benefit of the slowed empire-wide growth from vanilla.
2) Early game is faster and colonies grow quicker early on, keeping the primary benefit of planetary logistic growth from vanilla.
3) There's no "wall" beyond which more pops are nearly impossible to grow or assemble like in vanilla.
4) Robots are more useful then in 3.0, but less useful then in 2.8, since they require flat 250 assembly instead of 100 and thus twice the alloys and pop-time to create.
5) Synths and machines grow slower late game compared to other empires, especially synths with their organic growth reduction.
6) Planets develop faster. Since there are fewer pops over all, the lowered requirements on the capital buildings allow you to actually get them up.
7) There's no micro required to maximize pop growth other then building the relevant buildings. No keeping tiny AI empires around to raid, no keeping all planets half full to maximize logistic growth, no releasing and reintegrating vassals, and no resettling to hit the higher level capitals on synths/machines. Growth is not cheesable.
8) Conquest is weaker then in 2.8, since recently conquered pops are much less profitable (unless they're freed slaves) and recently conquered planets don't grow as quickly as peaceful ones. It's still very powerful, as it always has been, but it's not quite as strong.
9) Early conquest is significantly harder and less meta compared to 2.8, although better then in 3.0. Later on, plentiful bureaucrats and productivity boosts let you mitigate the effects of recently conquered pops, but early on they're much more difficult to deal with. It's not conquer homeworld => become twice as powerful like in 2.8, although it doesn't cripple your growth like in 3.0 either.
10) Planets that are conquered in their "formative years," that is their first 20 years after colonization, and thus get that early boost cut off will be much less populated then their peaceful equivalents, and conquered planets in general will have slightly fewer pops then their peaceful equivalents. Wartorn areas, especially wartorn areas that never got the chance to develop in the first place, will be less populated and productive then peaceful ones.

Compatibility: Overwrites the defines related to logistic growth and the empire-wide penalty as well as most of the capital buildings. It is savegame compatible, but I highly recommend starting a new one instead. If you don't want the capital buildings overwritten, subscribe to this mod: https://steamcommunity.com/sharedfiles/filedetails/?id=2464383318 and put it after this one in your load order, but this will remove the synth/machine/lowered pop requirements for capitals changes.

SkiRich 6 hours ago
Just to be clear, I'm talking about StarTech not StarNet.
When playing this with StarTech should I be loading the patch you have listed above?

No. The Starnet patch will work fine.

SkiRich Jun 19 @ 7:40am
Does this need the compatibility patch for the new StarTech AI from the same author?

Nirvaneyr Jun 15 @ 10:54am
Neat idea, it may actually make void dwellers enjoyable. Noticed a possible oversight:
The second and third starting habitats doesn't seem to get the 10 year growth boost. It triggers on the main habitat but not the others.

TheLegg May 30 @ 3:40pm
Yeah using LordOFLA collection, will follow the reset instructions. Is strange bug all pop assembly modifiers working, pop jobs working ok, getting the modifier for pop assembly speed displayed. Just when going to screen for pop assembly in planet view get message you have no species who can be assembled, whether its machine or hive.
I have checked all mods i can think of that edit the defines, game rules, pop jobs and species rights but nothing. Am assuming a bug so will do a reset.
Mainly wondering if you knew of a gotcha in regard to this.

Just booted up a machine empire. Problem doesn't replicate at my end; are you running any other mods affecting capital buildings?

TheLegg May 27 @ 4:49am
Just checked with a hive mind, seems the issue is with the pop assembly side of things

TheLegg May 27 @ 4:08am
I am not getting any pop growth with machine empires, does anyone know what controls that in the game files?
< >