Greenlight > Games > Merced's Workshop
Greenlight is being retired. For more information on how to submit games to steam, refer to this blog post.
This item has been removed from the community because it violates Steam Community & Content Guidelines. It is only visible to you. If you believe your item has been removed by mistake, please contact Steam Support.
This item is incompatible with Greenlight. Please see the instructions page for reasons why this item might not work within Greenlight.
Current visibility: Hidden
This item will only be visible to you, admins, and anyone marked as a creator.
Current visibility: Friends-only
This item will only be visible in searches to you, your friends, and admins.
Cars Incorporated
Description Discussions6 Announcements7 Comments188 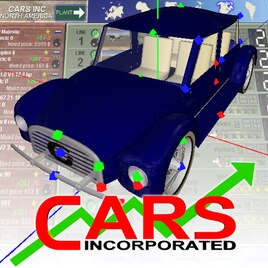 Preface: While the main work on redoing the UI and converting the game to the Unity engine is moving slowly but steadily, I had taken some time to update the game's new website at http://carsinc.wildduckgames.com. I have imported almost all the relevant data from the old site and brought back the forum[www.wildduckgames.com] and the user database in the process.
With so much of the old site back in action (even if it is with new looks), it was only a small step to bring in the online functionality that was originally developed for v0.35 but dropped due to the downtime of the website. Some details have taken longer than expected due to a different server and PHP configuration but after two days v0.36 is on as a mini update. May it help in passing the remaining time towards v0.40 - the Unity update.

But now for the changes:

The options menu now has a new section called Internet setup that will allow you to control the online behavior of the game. If you allow the internet access and enter your user credentials from WildDuckGames.com (the same as they where on cars-inc-game.com), you can see your position in the highscore on the start screen and upload your score once you complete a game.

The highscores are also presented on the website. The game shows 3 ranks for now, the website 10 in the sidebar or 50 on the highscore page. Right now this list is of course fairly short since it only has some data from old Inner Circle tests. Let's see it fill up!

Other Changes
Fixed bugs
Scripting
As always the update is already available for download[www.wildduckgames.com]. However older versions will not see this update as their update functions still points to cars-inc-game.com.
Read More
Cars Inc updated to v0.35
January 11, 2015 - Merced

Preface: It is an update that has been long overdue. Originally intended to be released back in September, but the downtime of the main website has prevented me from releasing it. While I am spending what little time I have for developing on the next major update v0.40, it has become doubtful if v0.35 will ever get released. But given the fact that even without the online integration parts there are some nice tweaks and fixes in it, I decided to release it anyway - without the online integration for now, which could become an additional v0.36 - depending on when the main site is back and how much work is left on v0.40 by then.
The next major release v0.40, which I am currently working on, will see a move from the current game engine (written in Dark Basic Pro) to the much newer, more powerful and more flexible engine Unity3D. A screenshot of the editor gone Unity[www.facebook.com] was recently posted on Facebook and other sites. Since this engine move requires me to rewrite some parts of the game and "translate" others , there won't be any more major changes to the Dark Basic Pro version (0.3x), as I would just need to do the same work on v0.40 again.
There is still a lot of work ahead of me before v0.40 becomes available and as always the amount of time until it's completion relies heavily on the amount of budget I have for getting some more spare time. There are options coming up for those of you who wish to support me in this endeavor, so please check back here, to the Facebook site[www.facebook.com], the new website[carsinc.wildduckgames.com], IndieDB or the new twitter feed soon and continue to share these sites and of course this Greenlight page. Everything can help to keep the development going.
The main website and the Inner Circle program will also both return once v0.40 gets closer to completion.
But now to the changes:

New Features
While the online integration has been removed for now, the new game end screen is still here. The game will now count your awards, keep track of your company value and your best selling cars and present you with an overview if you make it to the end of the game without going bankrupt. The screen will also show you your stats when you made it through the demo version (see the screenshot above).

Other Changes
Fixed bugs
Scripting
As always the update is already available for download[www.wildduckgames.com]. However with the main page still down the auto updater will NOT see the update, so you will have to update manually.
Read More
Description
Cars Incorporated is a classic tycoon game all about automotive engineering. Dream, build and sell your own cars and become an important part in the century-long history of the automobile!

Features
Cars Incorporated is available for download as a trial and early access version on the homepage:
- {LINK REMOVED}http://carsinc.wildduckgames.com

You can also give us feedback via the comments here, on Facebook or IndieDB:
- {LINK REMOVED}https://www.facebook.com/carsincgame
- http://www.indiedb.com/games/cars-incorporated

Help us shape the future of this unique business simulation game!

If you like cars and business sims, this is for you.

I played .31 back in December and it was good, but .34 has added a lot of fixes and improvements. I love the customization and the detail of managing your company. It's not just click build and sell. You have to choose the details. I purchased back in Dec 2013, and will probably give more soon to support the developer. I want him to work on this game full time, and not just sometime.

Since I downloaded .34 a week ago, I've been hooked. It stays on all the time, and I play it any time I have some extra time to kill. And allow you to kill time this will!

I look forward to seeing this game and it's developer succeed!

KingBobCat Jan 5, 2015 @ 8:17pm
I own the game and while fun, it has a ways to go. But I do think it has a bright future ... Especially if it can get some traction here. Good luck to the Developer! You have my support!