Store Page
Stellaris>  Workshop > Pancakelord333's Workshop
This item has been removed from the community because it violates Steam Community & Content Guidelines. It is only visible to you. If you believe your item has been removed by mistake, please contact Steam Support.
This item is incompatible with Stellaris. Please see the instructions page for reasons why this item might not work within Stellaris.
Current visibility: Hidden
This item will only be visible to you, admins, and anyone marked as a creator.
Current visibility: Friends-only
This item will only be visible in searches to you, your friends, and admins. 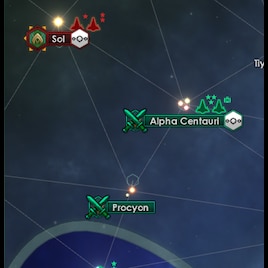 Pancakelord333
Offline
See all 1012 collections (some may be hidden)

This item has been added to your Subscriptions. Some games will require you to relaunch them before the item will be downloaded.
Description
Replaces the tiny pips on fully occupied / invaded systems with, more visible, crossed swords.
Just 2 DDS edits, so should be achievement compatible.

Note: The blades will only appear when the star base and all colonies in a system (if any) are occupied. If you don't see the blades, there is more to capture.

There are 2 alternative versions here (only use 1), which are a little less visible, but they will keep the flag on show in occupation:

Redeye 11 hours ago
can't you just update the version number so it stops yelling at us then? I dunno lol

Pancakelord333  [author] 23 hours ago
Just tested this on 3.1.1. No update needed, continues to work fine, ignore the launcher. The ship sprite-sheet changes from LEM have not impacted UI elements at all.

Daassie Jun 26 @ 2:05am
@Warmachine Auto-invasion!? That's amazing! Taking over planets and systems is the bane of my offensive wars, always felt so clumsy and beneath a Supreme Ruler. Not to mention poorly implemented in the UI (hence the absolute need for this mode).

Yeah, though it was broken for a while before 3.0

Warmachine May 26 @ 6:47am
Today I learned you can set transport ships to auto-invade by setting aggressive thanks to Jef, which also encouraged me to download this mod.

Grand Protector Of Hominis May 23 @ 9:48am
Ironman compatible?