Store Page
Garry's Mod>  Workshop > Frantic Firing Frenzy's Workshop
This item has been removed from the community because it violates Steam Community & Content Guidelines. It is only visible to you. If you believe your item has been removed by mistake, please contact Steam Support.
This item is incompatible with Garry's Mod. Please see the instructions page for reasons why this item might not work within Garry's Mod.
Current visibility: Hidden
This item will only be visible to you, admins, and anyone marked as a creator.
Current visibility: Friends-only
This item will only be visible in searches to you, your friends, and admins. 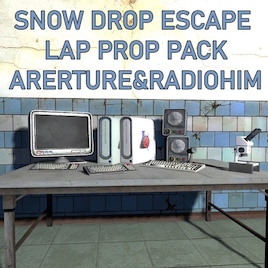 hadouken
Offline
See all 605 collections (some may be hidden)

This item has been added to your Subscriptions. Some games will require you to relaunch them before the item will be downloaded.
Description
"Soviet microcircuits are the largest in the world"
Hello comrades! From this presentation you can learn the achievements of the Radiohim plant in the field of radio industry and microprocessor technology.
Most of the equipment was developed by the team of the production association LEZ RADIOHIM under the leadership of aptekarr and MyCbEH.

Recently, we have consolidated our frienship with the private research corporation Aperture Science, continuing the production of the APERTURE & RADIOHIM joint project.
In addition to the production of large computers, we began to produce RADIOHIM M020 computers, the monitor and keyboard of which were developed by us, and the system unit and accessories were developed by them.

You can also find machines designed for working with magnetic tapes and lab printers.

In addition to equipment for scientific institutes, we also produce home computers, landline telephones, picture tubes, radioelectrical equipment, as well as audio systems that have earned recognition.
in all institutions of the Warsaw Treaty Organization countries.

If you encounter any problem, be sure to write to the "Comments" section. We will do our best to help you.

Thank you for your attention, and have a nice day!

JokieEJester May 13 @ 9:18pm
The prop power_rec_1 is missing textures for me, what do I need to have downloaded?

Nothing May 10 @ 3:26pm
Nice props, but where tape in the server_computer_power_tapereader ?

ShadowRUN 幸運な Apr 12 @ 3:05am
Nice work, looks pretty damn good.
Though aprerture PCs look a bit out of place in contrast with other equipment, i'd rather use an IBM or somehting similar.

Sprick Apr 11 @ 11:14pm
Comrade, you have been elected for the Award of Science of the Union Soviet Socialistic Republic (USSR). May you be honored. Glory.