Store Page
Guns of Icarus Online > Guides > finalfunk's Guides
This item has been removed from the community because it violates Steam Community & Content Guidelines. It is only visible to you. If you believe your item has been removed by mistake, please contact Steam Support.
This item is incompatible with Guns of Icarus Online. Please see the instructions page for reasons why this item might not work within Guns of Icarus Online.
Current visibility: Hidden
This item will only be visible to you, admins, and anyone marked as a creator.
Current visibility: Friends-only
This item will only be visible in searches to you, your friends, and admins.

Improving Communication: Signals
By finalfunk
A guide to using Signals in Guns of Icarus Online. Signals are audio-visual instructions to other crew members that are triggered by intuitive letter combinations. They are faster than typing in the heat of battle, and provide a way for players without microphones to 'talk' to their fellow crew.

How to Use Signals

Signals from the Deck

Signals from the Guns

Signals from the Helm

Comments
Introduction
Communications are vital to teamwork on any ship. The principal options available are voice or text (typing), but both have potential drawbacks, particularly in the heat of battle or for players without a microphone.

Signals to the rescue! Muse has created a wonderful tool to give players a rapidly accessible battery of commands, triggered by simple 3-letter combinations. They are also automatically translated to the principal language of choice for each teammate!

Signals are context sensitive and seperated into Deck Signals, Gun Signals, and Helm Signals below. This guide will walk through how to perform signals, and some suggestions for when to use each individual command.
How to Use Signals
Bring up the signal menu by pressing 'V'. (think "Voice") This will activate a visual menu with intuitive icons that you can navigate to your intended command. Depending on your current activity, you will see something like this: 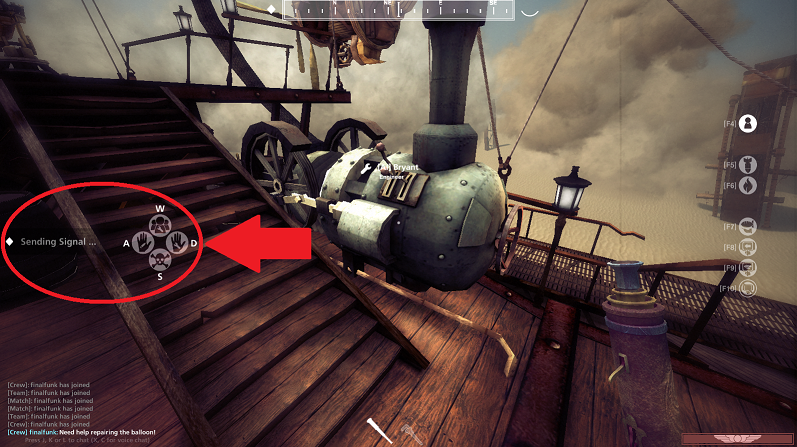 Simply press one of the directions indicated (such as 'S' for 'Enemy Sighted'), which will bring you to a sub-menu with the icon of your selection in the centre:

Finally, press another direction (such as 'D' for Starboard) to finish the signal, which will cause your avatar to shout ("Enemy sighted on Starboard beam!"). And just in case other crew members didn't hear that or can't (no audio), it also spells out your signal in the crew chat:

If you need to cancel the signal you are currently working on, you can hit 'V' again, or any other non-signal key (signal keys include W, A, S, D, R, and F).

Once you get used to using signals, your hands will learn the sequences so that you don't even have to think about it. (At helm, my favorite is V-D-D for "Repair the engines!" which is useful when I'm burning them for a tricky maneuver.)

The best way to learn these signals is to use them in game, so feel free to shut this down and play around. If you want to read on, I will explain all signals in detail and provide some useful tips about when to use each, from my own experience.
Signals from the Deck
OVERVIEW

When you are not actively engaged at a gun or the helm, you will have 4 categories of signals available:

This can be used by engineers when they cannot keep up with incoming damage and need help. The most common help required is at the hull, although certain ships might have other less-accessible parts (i.e. main engine on the Goldfish or balloon on the Mobula) that are useful to call when you see them damaged and are otherwise occupied.

This tells the crew what gun you are heading to. It can be useful as a response to a captain's directive (i.e. "Yes, I heard you tell me to man the gat, one second.") or simply to let everyone that isn't looking at you know where you are or where you're headed.

This signals to your crew that there is an enemy in a given direction. This does not replace the function of spotting, which is important to all team members for other reasons. The purpose of this signal is to draw attention in that direction. You may, for instance, see a spotted enemy behind your ship, but the pilot or crew are are focused ahead and
haven't realized the threat, yet.

Note: This command introduces two new directions: up and down. It is common for players to accidentally reverse "ahead" and "above" or "astern" and "below" when issuing signals, so keep that in mind if you don't immediately see the enemy they have apparently spotted. Familiarize yourself with these directions to avoid making that mistake yourself.

This signals your crew that you are performing (or about to perform) a specific repair. This is useful if there are multiple repairs necessary at a certain time (i.e. hull and balloon) to tell your crew that you are aiming for one in particular, so that they can get the other one. Sometimes it is also helpful to acknowledge that you heard an order to repair and are on your way.

Signals from the Guns
OVERVIEW

When you are using a gun, you have 2 categories of signals:

Navigational requests can be used to tell the pilot that you need them to adjust the ship's position, direction, or altitude in order for you to acheive a targeting solution. This can be incredibly valueable to a pilot, who doesn't have your perspective on the battlefield! Keep in mind that the pilot may also have other priorities that don't include shooting, and they are not bound to honor your request.

Note: Similar to Enemy sighted commands, there are six ways you can direct your pilot. Familiarize yourself with the difference between W: "Increase altitde" and R: "Move ship forward" (as well as S/F) in order to avoid confusion in the heat of battle.

These signals are identical to the enemy sighted signal used as a deck command. Scroll up to deck signals ENEMY SIGHTED to read the specifics.

When a gunner calls an enemy sighted, this could mean that they see an unspotted enemy, but don't want to get off their guns at the moment. Consider looking in the direction indicated and try to spot if required.
Signals from the Helm
OVERVIEW

When you are actively piloting a ship, there are three signal categories and one special spotting technique available to you:

This signal is very useful in battle to rapidly indicate to your crew who you want to attack or, in many cases, how you are planning to turn. If you are in a pyra and you plan to swing to starboard to expose your port guns to an enemy, you could shout "Man the port guns!" so that your crew knows to scramble in that direction, and be in place in time for the shot to line up.

This signals is identical to the enemy sighted signal used as a deck command. Scroll up to the deck signals section to read the specifics.

When a pilot shouts an enemy sighted, this may mean that they aren't in a position to actively spot the enemy themselves, but they see the enemy and would like to crew to help with spotting or to get on the guns.

This signal directs your crew to repair the indicated systems. As a pilot, you may want to establish protocol with your crew before or during the beginning of each match such as "repair signals only apply to engineers" or "repeated repair signals apply to ALL crew", etc. These are most commonly used when the ship hull is in danger, but also will apply to navigational equipment (balloon, engines), or guns, if the pilot needs to direct engineers to do something in a priority sequence other than what they are doing. It can be useful to call a repair before using a helm tool (i.e. Kerosene that will burn the engines), so that the crew is ready for the repair before the damage starts to occur.

In addition to the audio-visual signals described above, there is one special feature available to captains that is worth mentioning: the Captain Spot. The captain of a ship has a unique spot they can apply to an enemy or ally ship by pointing at them and pressing 'B'. Provided your aim is good and clear of obstruction, this will create a cross-shaped marker over the specified vessel.

In addition to the usual spotting techniques and "Enemy Sighted!" signals, this feature improves the captain's ability to indicate specific ships in a target-rich environment.
Conclusion
Signals are an invaluable tool for enhancing ship teamwork/communications. They beat typing out command by offering the speed of 3-letter combinations. (They don't always beat out microphones, but can also be useful for speedy comms, or for people that don't have microphones available.)

Please share this guide with other players, particularly those still learning the ropes. Thanks for reading!

(PS: If you are a geek and wonder how many there are, I count 32 unique signals. If you double-count the signals that appear in different context menus, there are a total of 44. The 32 unique signals have been recorded in two different male and two different female voices, so there are a total of 128 unique audio samples recorded for this system. You can change your avatar's voice in the character screen just below gender selection.)
< >
15 Comments

Rhonda Jul 11, 2015 @ 6:23am
Returned to GoIO after a while and wondered what signals are when I found them in the keybindings. Thx for your help.

mhauda96 Feb 17, 2015 @ 7:31pm
I would appreciate the ai's listening to them, it would make it easier to deal with the low player count at times, nice guide btw

Mr.Bando May 25, 2014 @ 5:46am
one particularly good feature about signals is being able to communcate with players of different language.

Thrashodon May 19, 2014 @ 8:31pm
Very nice guide. The voice system seemed kinda overwhelming but now that I can go through and memorize the commands and uses I'll be usign them more frequently. Thank you!