Greenlight > Games > aerojockey's Workshop
Greenlight is being retired. For more information on how to submit games to steam, refer to this blog post.
This item has been removed from the community because it violates Steam Community & Content Guidelines. It is only visible to you. If you believe your item has been removed by mistake, please contact Steam Support.
This item is incompatible with Greenlight. Please see the instructions page for reasons why this item might not work within Greenlight.
Current visibility: Hidden
This item will only be visible to you, admins, and anyone marked as a creator.
Current visibility: Friends-only
This item will only be visible in searches to you, your friends, and admins.
The Ditty of Carmeana
Description Discussions0 Announcements10 Comments246 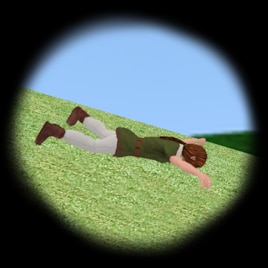 aerojockey
Offline
See all 12 collections (some may be hidden)

View The Ditty of Carmeana in the store

In case anyone is still following the Steam Greenlight page, The Ditty of Carmeana has a store page now and release is fairly imminent.

Read More
Update on the status of The Ditty of Carmeana
May 24, 2020 - aerojockey

I have an update on the progress of The Ditty Of Carmeana. You can read the details on my developer blog at http://tamperedevidence.com/progress-report/

Quick Links
Home page, whence you can download the demo:
Links to some playthroughs (aka SPOILERS):
Vinny from Vinesauce[www.vinesauce.com]:
Minima:
Cellbits (in Portuguese):
I was quite honored that people found the game and took the time to make these.

The beautiful, redheaded, and obnoxiously thin Princess Carmeana has been kidnapped and held ransom. The King, not wanting to incur the expense of deploying the army, decides to recruit a "fairy boy" to Rescue the Princess™. Meanwhile, there lived a poor farm boy named Kai (pronounced "Lance"). One day as he was trudging back to town, he encountered a fairy named Tabitha and saved her from financial ruin. Tabitha decided to tag along with Kai for awhile (it was the least she could do). As luck (or Destiny, depending on whether you believe Tabitha or Kai) would have it, they soon encountered an army recruiter who was looking for a "fairy boy". Kai's Glorious Quest™ to save the hot rich skinny redhead had begun.

Gameplay is third-person 3D, and can use either a gamepad or keyboard/mouse.

The game is a comedy, and makes fun of all the silly, unrealistic (for real life) cliches you see in video games. I don't want to give away too many jokes, but here's a couple just to give you an idea.


I, Carl Banks, began The Ditty of Carmeana as a hobby seven years ago and I finally have a playable demo of the first level (Kai's home town). The game and toolchain is written in Python using a custom game engine. A few performance-critical sections are written in C (that's plain C, not C++). Artwork was done in Blender, and I did most of it myself. Unfortunately I'm a better coder than an artist. The only help I had with the artwork was the characters, which I commissioned because they were beyond my skill.

Now that the game has been greenlit, I am making plans to develop the demo into a full game, or at least a half game, to be released on Steam. So as not to pull a George R. R. Martin, I won't estimate a release date. Ever. Deal.
Whether I release a full game or just half will depend on... things.
< >
246 Comments

Legion May 3, 2020 @ 2:38am
I am really looking forward to this game. I saw Vinny Vinesauce's stream years and years ago, and just looked up the status of the game now. I thought it was hilarious then, and the humour holds up great today. Good luck!

Heinzy the Ketchup Apr 8, 2018 @ 1:15pm
Good to see that the game is still being developed! I look forward to playing the full game!

Eternichi Mar 2, 2017 @ 1:12am
Looks hilarious. Been interested in it since watching Cr1tikal play

The Ditty of Carmeana has been Greenlit and is now listed in the Steam store. For the latest information, purchase options, and discussions for The Ditty of Carmeana, please see it on the Steam Store or in the Steam Community.
Visit Store Page
For more details Visit Community Hub
For latest discussions
If you really, really want to, you can continue to the Greenlight page. Information on this page may be out of date, since all the action has moved to the areas noted above.