Store Page
Arma 3>  Workshop > Anthrax's Workshop
This item has been removed from the community because it violates Steam Community & Content Guidelines. It is only visible to you. If you believe your item has been removed by mistake, please contact Steam Support.
This item is incompatible with Arma 3. Please see the instructions page for reasons why this item might not work within Arma 3.
Current visibility: Hidden
This item will only be visible to you, admins, and anyone marked as a creator.
Current visibility: Friends-only
This item will only be visible in searches to you, your friends, and admins. 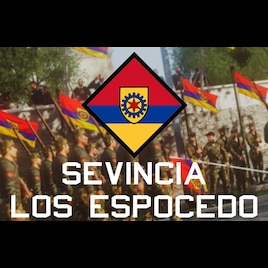 This item has been added to your Subscriptions. Some games will require you to relaunch them before the item will be downloaded.
In 1 collection by Anthrax
Continent in Arms

The People's Democratic Republic of Sevincia Los Espocedo is the second faction in my "Continent in Arms" setting, representing the communist state bordering Masere to its north.

The Actual backstory/Lore
The PDR of Sevincia Los Espocedo is a spanish speaking communist state that borders Masere in its north, and Vespaccia to their south. Encircled by threats to its revolution or even territorial integrity, Sevincia, despite its decaying technological or economic base, must work to survive this hostile land.

Join us and keep up to date with my mods on the A3 Hub discord @ https://discord.gg/dyXnZ8u

Forum post for the mod: https://forums.bohemia.net/forums/topic/233399-kingdom-of-masere/
Check in once in a while for updates or check out my channel in the A3 Hub discord.

M | USEC | OPCM | Anton Volkov Apr 23 @ 10:57am
@Owl Its a fake universe, he is making up the factions and the continents (I think..) its extremely cool and this is exactly what type of mods i fucking love playing with it makes arma great again.

Owl Mar 28 @ 10:20pm
Yo what the hell is this mod? What is this Universe? I am super interested yet confused at the same time lol

Jeguk Mar 25 @ 8:55am
This faction is not bad, but, I don't know, I feel that something is missing... Maybe more units with some varied weapons and equipment to give that feeling of an armed group with no huge supplies of weapons, maybe some units with fancy hats and uniforms that represent that kind of Latin generals and HQ of the state...

Anthrax  [author] Mar 23 @ 11:23pm
Mission makers will just have to select the appropriate map. Map making is a very tedious and complex thing to do and i dont think i have the time to relearn the basics of it lol

tinydestroyer44 Mar 23 @ 1:36pm
is there a certain map that is lore friendly? idk why i read the whole lore pdf lmao

Anthrax  [author] Mar 23 @ 2:06am
@Phantom
Yes im planning on adding at least 2 or 3 more factions, with some additional made by third parties who are interested in them.

Corporal Ray Person Mar 22 @ 11:11pm
Masere is French, but this is... Spanish? Damn Continent In Arms world really do be Ace Combat
< >