Store Page
Hearts of Iron IV>  Workshop > [MILe] Alexandros's Workshop
This item has been removed from the community because it violates Steam Community & Content Guidelines. It is only visible to you. If you believe your item has been removed by mistake, please contact Steam Support.
This item is incompatible with Hearts of Iron IV. Please see the instructions page for reasons why this item might not work within Hearts of Iron IV.
Current visibility: Hidden
This item will only be visible to you, admins, and anyone marked as a creator.
Current visibility: Friends-only
This item will only be visible in searches to you, your friends, and admins. 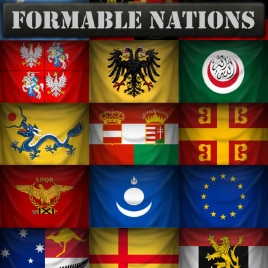 See all 336 collections (some may be hidden)

This item has been added to your Subscriptions. Some games will require you to relaunch them before the item will be downloaded.
Description
Read this or be ignored
I don't own this mod, so the only thing I will do is try to keep it working. I won't alter it beyond that. I'm keeping it original for posterity's sake.
First of all - I do not own this mod, nor do I claim to have created it. I went investigating the original author and found their Gitlab. Hope all is well with them. I will link the Gitlab below, above the original description.

Second of all - I am reuploading this for convenience sake, I don't ask for anything. The original mod from January seemed buggy, I have tested this version (direct from their Gitlab) and all works on my end. I'm just here to play a game and have fun, nothing more. Enjoy guys.

I do not plan to update this. The last known edit to Gitlab shows 1.10 compatibility.

1.8: Mare Nostrum
Instead of having an inconsistent way of forming nations by events, this mod uses decisions which let the player know the prerequisites for forming each nation. This mod creates an end-game reward for gaining certain territories and allows the player to choose when to form the new nation. Note that this mod’s formable nations work independently from Waking the Tiger’s.


Be the required country
Control all required states
Be independent
Getting a core in all uncored states required to form the nation + some extra ones.
A brand new name, flag and map color.
+20% Stability.


FAQ
Will this mod work with other mods?
It will work as long as they don’t modify states.

Will you make a port of this mod for [InsertTotalConversionMod]?
It would require a lot of work to make keep up with unexpected updates of the other mod.

Does this mod conflict with the dlc formables?
No, this mod’s nations are separate although some flags/names might be similar.

Is there a list of all formable nations?
There’s a pastebin link here[pastebin.com]. Theres an even better one with pictures (WIP courtesy of Crimsonleaf42)[docs.google.com]

Do you have a Discord server?
Yes, we have a discord server for suggestions, issues and questions.

Special Thanks
Abbus for allowing the merge of a flag side mod into this one.

Why'd the mod get deleted?
I don't know, the user who uploaded it was deleted from steam, probably by default all their items were subsequently deleted as well.

Why was the author deleted off of steam?
I don't know.

Harald Hardrada 5 hours ago
I mean formable countries, what does it mean they are not new?

[MILe] Alexandros  [author] 20 hours ago
@Harald Hardrada There are not any new countries.

Gidi Jun 16 @ 2:57am
@★MAN★ Dragon Lord He will not this is a reupload and he will only make changes so that the mod is up to date.

russianbiasheil Jun 15 @ 7:28am
could you add teutonic order plz thanks lol
< >