Store Page
Tabletop Simulator>  Workshop > 2Huskies's Workshop
This item has been removed from the community because it violates Steam Community & Content Guidelines. It is only visible to you. If you believe your item has been removed by mistake, please contact Steam Support.
This item is incompatible with Tabletop Simulator. Please see the instructions page for reasons why this item might not work within Tabletop Simulator.
Current visibility: Hidden
This item will only be visible to you, admins, and anyone marked as a creator.
Current visibility: Friends-only
This item will only be visible in searches to you, your friends, and admins. 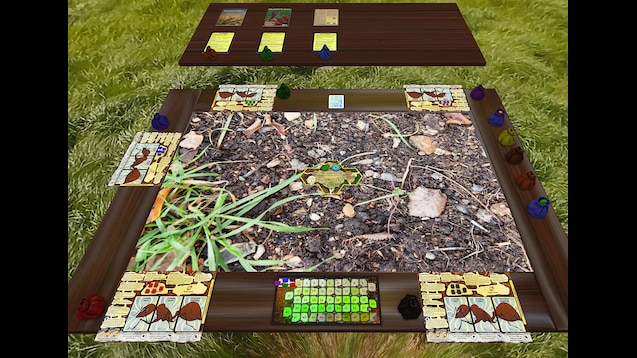 This item has been added to your Subscriptions. Some games will require you to relaunch them before the item will be downloaded.
Description
This is the official Tabletop Simulator Workshop Mod for “March of the Ants” and its two expansions, “Minions of the Meadow: and “Empires of the Earth.” This game has all the excitement of a sprawling 4X game, but at a microscale! There are plenty of opportunities to EXplore, EXpand, EXploit and EXterminate within the Meadow, and even the ability to travel across time and space through the use of “Wormholes!”

I would like to thank Tim Eisner, the Game Designer, for his collaboration and support for this project! I also want to thank both Tim and Ryan Swisher for taking the time to playtest this Tabletop Simulator Workshop mod! I encourage you to check out the Weird City Games website, where you can find physical copies of this game and support the developers!

Please see below for descriptions of the base game and the expansions.

March of the Ants
As spring dawns the great thaw begins. Deep beneath the lush meadow grasses the queen stirs in her nest and the colony comes to life. Soldiers venture forth, battling centipedes while clashing with opposing colonies for territory. Workers dig an ever-expanding network of tunnels in their tireless search for food. The first larvae hatch and it is clear this generation will be different: the young colonies rapidly evolve into a multitude of new forms. The ants march out to claim the meadow as their own.

In March of the Ants, you create the shared Meadow board by sending your ants to explore it, revealing and strategically placing two dozen unique tiles like Fern, Pebble, and Nest of Centipedes.

Populate new territory by breeding larvae and marching your ants onto collection sites. Will you engage competing colonies in battle, seeking to claim the land for yourself? Or will you establish peaceful, symbiotic relationships and share the spoils? All of this must be done while carefully managing the resources in your underground nest.

Forage for Event Cards like Strange Appetite, Cold Snap, and Fungal Outbreak to impact the entire board – or just one unlucky opponent.

Mutate your colony with special Evolution Cards like the Trap Jaw head, Weaver thorax, and Leaf Cutter abdomen. What weird and wondrous path will your colony’s evolution take: advanced Workers, fearsome Soldiers, or a fertile Queen?

Emerge triumphant by scoring Colony Points as your ants explore and control the Meadow. Search for Colony Goals like Epic Stores, Followers of the Eyeless, and Extensive Tunnels to plan your route to victory.

Major Workers - Each Colony can breed Major Workers, larger ants who evolve with your colony. Use their powers to scout the best territory or lead your armies to war.

Aphids - Send your ants to find aphids and form a symbiotic relationship. Herd them to new hexes where they will have space to grow and provide greater harvest.

Tactics - Play Tactics like Feint, Ferocious Expansion and Savage Cannibals to catch your opponent by surprise and turn the tide in battle.

Parasitic Evolutions - Infect your opponent’s ants and corrupt their most powerful evolutions, forcing them to share their gains with you.

Predators - Summon forth the Centipede Broodmother and the Trapdoor Spider, terrible beasts who roam beyond the meadow.

Sculpt a Darwinian Edge: In Empires of the Earth, players draft Mutations to jump-start their colonies with asymmetric abilities. These Mutations let players craft their strategies from the start of the game and kick the game into high gear from the very first turn.

Build Your Nest: Expand your underground empire with Nest Chambers, a brand new card type that lets you use your nest inhabitants to unlock powerful, recurring abilities.

More of Everything! Empires of the Earth includes 18 new Evolutions, Events and Colony Goals that will let you diversify your strategy and grow your colony in exciting new ways. Maintain a delicate balance with the Peacekeeper head, or spread poisoned spores with Cult of the Gray Queen.

A Rich and Diverse Colony: To celebrate the world of March of the Ants, we reached out to our favorite artists from around the globe. This new expansion to March of the Ants features art from Vincent Dutrait, Mr. Cuddington, the Mico, and more!
< >
13 Comments

leberschnitzel Oct 2 @ 11:29am
Tim also gave me some of the assets to make a mod, roughly a year ago, but out of personal reasons I couldn't finish it.
I've modelled the ant meples, so if you want to use them, I can give you them. Not a fan of the Ant Minis. Same with the table mat you used ^^

2Huskies  [author] Apr 29 @ 6:12pm
Hi everyone! With today's update, the "Minions of the Meadow" Forage cards now have their Ferocity values printed on them. I verified those values with the cards in my hard copy of the game. Please let me know if you notice anything else that needs updated!

2Huskies  [author] Apr 25 @ 11:18am
Hi robertorabbid and xtagoulis! I finally got access to my expansion games. They have been in storage during some home remodeling. There is indeed a printed value on every Forage card (both Standard and Tactics variants). I'll work on updating the cards with missing values and hope to have the mod updated by the end of this week!

any news about the cards ferocity missing mentioned by robertorabbid. Do you verify the files?

2Huskies  [author] Mar 27 @ 9:23pm
Hi @quetzalzacatenango and @Big145, thank you for pointing out the problems with the base game's rulebook. I updated the link, so it should work now. Please let me know if you have any other issues.

2Huskies  [author] Mar 19 @ 8:43pm
Hi robertorabbid. Thank you for your comments! When I get a chance, I will verify the cards in both "Minions of the Meadow" and "Empires of the Earth" against my physical components. Any cards that are supposed to have a ferocity number, I will modify accordingly. It may just take me a few days to verify the values and update the art.

robertorabbid Mar 19 @ 5:08pm
@Sticks I'm talking about all the cards from Minions of the Meadow. I'm sure they have a ferocity number because in their expansion rulebook appears some images WITH a ferocity number, and in internet too.

PALERUNNER Mar 18 @ 1:32pm
I keep getting "PDF Error: Unsupported File Format" but just for the base rulebook

Sticks Mar 17 @ 5:01pm
It depends on which expansion cards you are talking about, I know that many/all(?) of the Tactics cards from one of the expansions don't have a ferocity number by design. In those cases it just means the card has an effective ferocity of zero.
< >