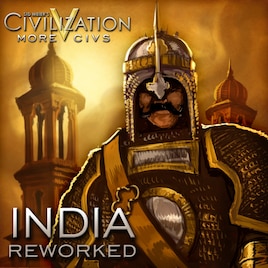 This item has been added to your Subscriptions. Some games will require you to relaunch them before the item will be downloaded.
In 1 collection by Pouakai
More Civilisations' civs

57 items
Description
The Indian Subcontinent was home to many empires and countless cultures which rose and fell throughout its recorded history. Nestled between the Indus and Ganges rivers, Indian civilizations developed a unique culture of unparalelled grandiosity, majesty and refinement. Here, four of those civilizations await your command. The ancient Maurya Empire, forged by the famed Chandragupta in 322 BC and ruled by mighty Ashoka from 268 to 232 BC; the Chola Empire, who under the rule of Raja Raja I entered an age of military, cultural and naval dominance in southern India; the Mughals who blended Indian and Islamic cultures and left a lasting legacy on India as one of her greatest empires; and the Maratha, who conquered the Mughals and ruled India until the invasion of the British.

All four civilizations have TSL values for Gedemon's YnAEMP maps, allowing them true start location support when using those maps. They also have custom music, and voiceovers provided by Andrew Holt. In addition to the four, India has been updated with new uniques and a new UA.

Maurya - Ashoka
Chakravartin
Upon making peace, recieve Culture per turn from followers of your religion. The amount of culture increases with the amount of cities captured in the previous war. The bonus is lost and reset on capturing a city or declaring war.

War Elephant:
Replaces the Chariot Archers. Stronger and slower than the chariot archer, but can move through rough terrain without expending all movement points.

Pillar of Ashoka:
Replaces Courthouse. Can be built in every city, and provides additional happiness and faith. Upon founding a religion, the Pillar of Ashoka converts 75% of the city's population to your religion.

Farsakh Cannon:
Replaces Cannon. Much more powerful, but very weak to melee attacks. Can only move when at full health. The Cannon is also much more expensive to build

Qila:
Replaces Castle. Provides +2 Tourism after Flight is researched. Provides +1 Golden Age point for every two wonders and 1 for every four buildings in the city. Contains one slot for a Great Work of Art. City must have Walls

India - Gandhi
Mother Ganges
Unhappiness from number of Citizens halved. Cities adjacent to rivers recieve +5% growth for every religion present in the city

Mandir:
Replaces Temple. +1 Faith for every 2 Citizens in the city

Icuddlezzz Jun 18 @ 6:28am
I subscribed but it doesnt show up in the games' mod loader

ruhrgebietheld Feb 28 @ 9:23am
Did a recent playthough as the Maratha. Everything worked, but there was this weird issue with them where adopting social policies sometimes didn't cause the cost of the next one to rise. I think I got three straight policies at 30 culture, for example. I couldn't really discern a pattern as to when the cost did or didn't rise though.

Ultra Sigma Jul 27, 2019 @ 11:43am
Hi this mod is causing a CTD in the mod loading screen. Simply selecting it and pressing "okay" causes the game to crash. Please help.