Greenlight > Games > Celx Requin's Workshop
Greenlight is being retired. For more information on how to submit games to steam, refer to this blog post.
This item has been removed from the community because it violates Steam Community & Content Guidelines. It is only visible to you. If you believe your item has been removed by mistake, please contact Steam Support.
This item is incompatible with Greenlight. Please see the instructions page for reasons why this item might not work within Greenlight.
Current visibility: Hidden
This item will only be visible to you, admins, and anyone marked as a creator.
Current visibility: Friends-only
This item will only be visible in searches to you, your friends, and admins.
Bad Taste
Description Discussions2 Announcements14 Comments278 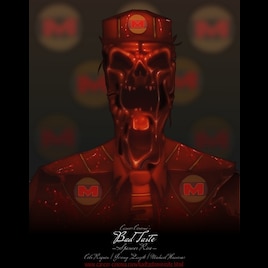 For those of you that missed it, Spenny Played "Bad Taste" on Vice!
Here is the link to that: http://en.daily.vice.com/videos/we-played-video-games-with-spenny-and-he-sucked

Read More
Hi can you please give me your opinion on these Spenny posters?
April 22, 2016 - Celx Requin

Which one of these two do you like better?

Bad Taste is a loving send up, and homage of trash cinema. The story revolves around police officer "Chet", as he tries to escape the city of Victoria BC before it's nuked to eradicate a zombie epidemic caused by genetically modified fast food. The game obviously taking it's title and some inspiration from the Peter Jackson film of the same name.

Gameplay is centered around "restricted combat", as each level will only allow the player to select 1 firearm, 1 melee, and 1 item to assist them through the stage from the pool of weapons/items the player has already unlocked. Certain firearms make noise, and will attract more zombies if shot, and some items are better suited to fighting some enemies than others, so the player will need to decide how to approach each level to maximize their score.

*In the future, the game will be expanded to include additional character campaigns, as well as random enemy encounters, more weapons, and surviors to rescue, plus Co-op.

Bad Taste is an independent production currently in Steam greenlight by a three man team. The game stars Spencer Rice (Kenny vs Spenny) as "Chet", and has cameo's by Kenneth Hotz (Kenny Vs Spenny), and Lloyd Kaufman (Toxic Avenger, Poultrygeist), as well as featuring a full soundtrack by Lodger (Califonication OST). The animation is done by the newgrounds "Tank award" nominee Jeremy Zaczek, and the game was produced by Celx Requin. The programmer for the project is Alexander Taylor, a seasoned programmer from Australia.

Thanks, I am looking forward to answering any questions you fine folks may have :)
- Celx Requin (Developer)
Popular Discussions View All (2)

What features should they add?
RUINER

Celx Requin  [author] Jun 14 @ 3:37pm
2/2 There is a skilled Japanese artist (worked in the anime industry) that reached out to me asking if he could complete the required assets, but I am burnt out, the project still has commercial interest, but frankly after surviving the economic turmoil of the pandemic, and finally getting back on my feet, I just don't have the energy to deal with it at the moment.

Co-coordinating a project of this size isn't easy, Bad Taste did a lot with very little, immense talent was involved with the project, and I hate to see the work that went into the project go to waste, it will get completed, just might take some time.

Celx Requin  [author] Jun 14 @ 3:36pm
@Karl Genocide, The game isn't dead, I have a plan for it, unfortunately it's not my main priority right now, it's frustrating speaking about the project because from the art side of things it was close to complete, there were key aspects of the artwork that needed to be completed in a specific order in order to secure funding which would have enabled us to continue, but for reasons out of my control that did not occur.

The project financially ruined me [everything came out of my pocket], and over the last two years I have been rebuilding, I work in a different, but related industry [information security] and that has given me the skills to complete the project from a programming standpoint. 1/2

This was always so bizarre to me.
Spenny hates video games and has always made that known on KVS.

The game looked like Troma's Poultrygeist featuring Spenny.
It's such a strange mashup of concepts, I feel like i'd dig it but I doubt many others would fall into the niche of liking those two things.

I think the animation is quite solid, I'm an animator myself, i'd love to get in contact with the team behind this and see what they are working on next? Any final update would be cool to hear.

Celx Requin  [author] Dec 3, 2017 @ 1:48pm
@Dragon, Hi, yes the game is still in production, I sometimes discuss what's going on with my project when I'm a guest on Florian Himsl's youtube channel. The art for the game is done, and we have a new programmer but everyone is taking a break for December.

We should have something ready for steam early access at the end of next year!