Store Page
Garry's Mod >  Workshop > GaussTheWizard's Workshop
This item has been removed from the community because it violates Steam Community & Content Guidelines. It is only visible to you. If you believe your item has been removed by mistake, please contact Steam Support.
This item is incompatible with Garry's Mod. Please see the instructions page for reasons why this item might not work within Garry's Mod.
Current visibility: Hidden
This item will only be visible to you, admins, and anyone marked as a creator.
Current visibility: Friends-only
This item will only be visible in searches to you, your friends, and admins. 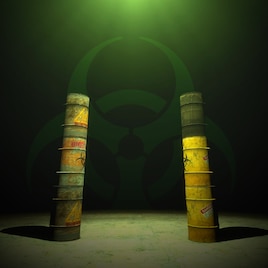 This item has been added to your Subscriptions. Some games will require you to relaunch them before the item will be downloaded.
In 1 collection by GaussTheWizard
Bio-Annihilation II: All Companions

21 items
Description
“Also shall be qualified as attempted murder the employment which may be made by any person of substances which, without causing actual death, produce a state of lethargy more or less prolonged. If, after the administering of such substances, the person has been buried, the act shall be considered murder no matter what result follows.”
– Haitian Criminal Code, Article 246


Bio-Annihilation II is the zombie mod to end all zombie mods – it provides the greatest; most versatile; most dangerous zombie nextbots to ever outbreak on the Steam Workshop. Spread a deadly bio-weapon across the map that warps its victims into mindless, man-eating monsters, and work to send them back to the dirt with thrilling, strategic action.

Zombies are the tried and true force of evil; a device of villainy and storytelling. Bio-Annihilation II offers only the villains; the devices; the tools to write a story of your very own. Will you be the star of a heroic tale, cutting through an infinite horde like a lawnmower through grass? Will you be the sole survivor of abaddon, fighting for your life amid the hostile world and those it slew? Will you be the unlikely perpetrator, responsible for unleashing God’s worst creation into an unsuspecting populace? Or will you just noclip into the air and revel in the orgy of destruction you rain below? It’s all your decision to make.

Key Features
Half-Life 2: Episode One and Team Fortress 2 content is required for some sound effects. The mod won't kill itself if you don't have them, but some things won't make sounds.

Recommended Companions
All of these addons are accessible in the All Companions collection above.

Credits
Enjoying this mod? Hate it? Have any concerns? Speak your mind in the comments below, maybe before the zombies eat it. ☣
Or, come pay the GitHub a visit![github.com]

Please read the Q&A before you comment to address common questions.
Popular Discussions View All (35)

Wasniahc Nov 21 @ 12:27am
is there a way to stop infected corpses from despawning?

Kerk Nov 20 @ 3:36pm
It would be a good idea to add some form of compatibility with VJ No-Target, it would make of a very useful function.

BeAsTy Nov 13 @ 10:30am
What needs to be done so that zombies beat props in front of them?