Store Page
rFactor 2>  Workshop > cyruscloud's Workshop
This item has been removed from the community because it violates Steam Community & Content Guidelines. It is only visible to you. If you believe your item has been removed by mistake, please contact Steam Support.
This item is incompatible with rFactor 2. Please see the instructions page for reasons why this item might not work within rFactor 2.
Current visibility: Hidden
This item will only be visible to you, admins, and anyone marked as a creator.
Current visibility: Friends-only
This item will only be visible in searches to you, your friends, and admins. 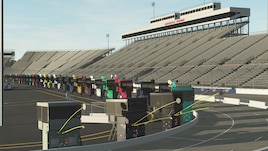 cyruscloud
Online
See all 16 collections (some may be hidden)

This item has been added to your Subscriptions. Some games will require you to relaunch them before the item will be downloaded.
Description
Martinsville Speedway is an International Speedway Corporation-owned NASCAR stock car racing short track in Henry County, Ridgeway, Virginia, just south of Martinsville. At 0.526 miles (847 m) in length, it is the shortest track in the NASCAR Cup Series. The track was also one of the first paved oval tracks in NASCAR, being built in 1947 by partners H. Clay Earles, Henry Lawrence and Sam Rice per Virginia House Joint Resolution No. 76 on the death of H. Clay Earles. It is also the only race track that has been on the NASCAR circuit from its beginning in 1948. Along with this, Martinsville is the only NASCAR oval track on the NASCAR track circuit to have asphalt surfaces on the straightaways, then concrete to cover the turns.

This track was originally set to be a 3PA release but was delayed after Studio 397 obtained Rfactor 2. After that other work had my attention for years but I finally got back around to revisiting this in 2020. I took what I had built and updated everything as far as I could for now to meet current standards and have worked with the guys at SCSR to try to make this work as well as possible with the official stock cars. There are some issues with the AI driving into corners too deep; this will be looked at with a car update at a later point. The track also uses some new pit box models that will eventually be used at other tracks but until everything becomes cohesive there could be bugs that happen with them when racing with custom carsets.

Hope you enjoy this track which has been a long time coming. This release is to set a standard for many more quality stock car tracks to come.

Note from author: This mod was created by a simracing enthusiasts for free and not for sale!

Disclaimer: All materials are only for acquaintance. Not for sale. All rights reserved by their owners.
< >
13 Comments

Oceania Stockcar League Jun 3 @ 5:25am
@gtc2: Work needs to be done on the AI side of the cars to match what was done on the track to get AI working really well. Both versions of Stockcars have little AI work done on them.

cyruscloud  [author] Mar 18 @ 4:22pm
@ru12perter Its already open, you can find it at https://discord.gg/rAQutdqR this link will expire eventually though

ru12perter Mar 17 @ 10:05am
cyruscloud when you go to open the discord channel let me know here in plan by comment please, I'll be attentive to when you send it to me

gtc2 Mar 14 @ 1:47pm
The track is great, but somethings not right with the AI. When they go into the turns the bounce and jump all over the place like it's Supercross. Its like they're bouncing off mounds.

ru12perter Mar 5 @ 8:38am
ok cyruscloud This is a project that I had in mind and for which I want to thank that I can have some help although now I am not dedicating much time but I will be able to develop it little by little it is not something that is urgent nor much less because it takes time that is why I say that It is something that I will learn little by little and of course with the help I hope to learn a lot

cyruscloud  [author] Mar 2 @ 9:33pm
@ru12perter I'm going to be opening a discord channel to help with that sort of thing. If you are part of the Rfactor 2 discord channel keep an eye out for when I start inviting.