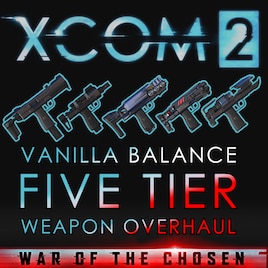 Iridar
Offline
See all 152 collections (some may be hidden)
You need DLC to use this item.

This item has been added to your Subscriptions. Some games will require you to relaunch them before the item will be downloaded.
Description
This mod sets up a five tier weapon system: conventional -> magnetic -> coil -> laser -> beam.

All of the affected weapons, research and schematics are finely tuned to preserve the overall balance of the War of the Chosen without any mods.

Researching weapon technology will take the same amount of time overall: there are more techs to research, but each tech will take less time.

Buying weapon upgrade schematics will cost you the same amount of Supplies, Alien Alloys and Elerium Crystals: there are more schematics to purchase, but each one cots less.

Research takes more time and upgrades are more expensive on the Legendary difficulty, same as without this mod.

REQUIREMENTS
Requires a new campaign. Add this mod to existing campaigns at your own risk.

F.A.Q.
Q: Why did you put weapon tiers in this order?
A: All weapons have a hidden property called Weapon Tech. Breakthroughs and many soldier perks scale with Weapon Tech. The game - and many mods - expect there to be only three possible values for Weapon Tech: conventional -> magnetic -> beam. For example, Shredder perk is hardcoded to give more shred to weapons of beam Weapon Tech. Weapon Tech also determines which weapons are affected by which Breakthroughs. So to me it made the most sense to group magnetic and beam weapons with each other.

Q: I don't like the order of tiers in this mod. Or I don't want vanilla balance. Can you change it or make a different mod?
A: No. But you can change which weapons go into which tier and rebalance them in this mod's configuration. You can also reskin weapons with Weapon Skin Replacer or XSkin.

Q: Which weapons are affected by this mod?
A: Currently it affects fifteen weapon categories, five weapons from each. This mod only affects weapons from Companion Mods and War of the Chosen itself, as well as weapons from Coilguns and Laser Weapons mods. Only firearms and melee weapons are affected. Secondary weapons, like Arc Throwers and Grenade Launchers are not affected. You can find the exact list of affected weapon templates in this mod's configuration files.

Q: Can I preview the new Laser and Coil weapons somewhere?
A: Sure, go here.

Q: Can you make this weapon overhaul compatible with <Insert Mod Name>?
A: No. But you can add configuration for more weapons in the config yourself.

Q: Can I copy this mod's configuration, change it, and release it as my own weapon tier overhaul? Or as a plugin to make <Insert Mod Name> compatible with this overhaul?
A: You are welcome to do so.

Q: How does this weapon tier overhaul work with mods that add three tiers of their weapons?
A: It does a bit of trickery: the Tier 3 "coil" research and schematics are actually magnetic ones behind the scenes, so mod-added weapons that require magnetic research/schematics will become available when you get to coil weapons with this mod.

Q: Can I use other coil and laser weapon mods instead of the ones specified in this mod's requirements?
A: No, this weapon overhaul is specfically set up to work with templates from those two mods.

Q: Compatible with LWOTC?
A: LWOTC uses its own five-tier system, use Mod Jam for LWOTC to integrate my Laser and Coil weapon variants into LWOTC.

COMPANION MODS
This weapon overhaul is explicitly configured for weapons from the following mods. Their schematic costs will be adjusted automatically, and the weapons will use stats specified in this mod.

COMPATIBILITY
This mod completely reconfigures all of the affected weapons. Base game weapons, like Magnetic Rifle, no longer take their stats from the game's XComGameData_WeaponData.ini configuration file. Instead, their stats are set in this mod's configuration.

This is not scary, and this is not a problem, just something to be aware of.

CONFIGURATION
This mod is essentially a few thousand lines of configuration for the Template Master, so it is entirely configurable through various configuration files in:
..\steamapps\workshop\content\268500\2406120902\Config
If you make any changes to this mod's configuration I highly recommend you make a backup copy so you don't lose them if I update this mod.

Each weapon of each tier is configured individually. If you wish to tweak specific weapon stats, find the config folder with the corresponding weapon category.

Huge thanks to my wonderful patrons who helped me produce this mod. Please consider supporting me on Patreon[www.patreon.com] if you require tech support, have a suggestion for a feature, or simply wish to help me create more awesome mods.
Popular Discussions View All (3)

Coilgun Tier Override Mod Development: Would it be okay?
KZFKreation

Iridar  [author] Oct 11 @ 7:10am
@Biddy
Either that or the overhaul itself is not enabled properly.

Biddy Oct 11 @ 6:54am
Yeah I got that, probably a mod conflict causing the issue then?

Biddy Oct 10 @ 11:26pm
Magnetic and Coil weapons unlocked at the same tech, seems like pulse laser and beam will do the same?

TrooperCoon Oct 3 @ 6:39am
i just tested it and, you can indeed run it together with five tier overhaul, it'll be the requirement to unlock magnetic tier, the only problem being it's actually stronger than magnetic tier so... you gotta balance it out by tweaking the configs

TrooperCoon Oct 3 @ 1:01am
is this compatible with etc weaponry mod considering that mod adds a new tier before magnetic weapons?
< >