Store Page
Tabletop Simulator>  Workshop > Eldin's Workshop
This item has been removed from the community because it violates Steam Community & Content Guidelines. It is only visible to you. If you believe your item has been removed by mistake, please contact Steam Support.
This item is incompatible with Tabletop Simulator. Please see the instructions page for reasons why this item might not work within Tabletop Simulator.
Current visibility: Hidden
This item will only be visible to you, admins, and anyone marked as a creator.
Current visibility: Friends-only
This item will only be visible in searches to you, your friends, and admins. 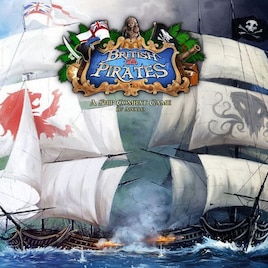 Eldin
Offline
See all 4 collections (some may be hidden)

This item has been added to your Subscriptions. Some games will require you to relaunch them before the item will be downloaded.
Description
British Vs Pirates is a miniature ship combat board game set during the golden age of piracy. Strategically sail your ship into favorable positions, play skill cards, roll dice and unleash hellish broadsides to send the enemy to the crushing depths! Be aware of your ship's strengths and weaknesses. Sail her correctly and you will be rewarded with victory. The faction with the last ship afloat wins!

British vs Pirates Volume 1 is now on Steam! The ship combat game set during the Golden Age of Piracy can now be played via Tabletop Simulator. So hoist the colors and brace yourself and you send your enemy's ships to the crushing depths in this 2 to 4 player war game.