Store Page
Arma 3>  Workshop > Launchman's Workshop
This item has been removed from the community because it violates Steam Community & Content Guidelines. It is only visible to you. If you believe your item has been removed by mistake, please contact Steam Support.
This item is incompatible with Arma 3. Please see the instructions page for reasons why this item might not work within Arma 3.
Current visibility: Hidden
This item will only be visible to you, admins, and anyone marked as a creator.
Current visibility: Friends-only
This item will only be visible in searches to you, your friends, and admins. 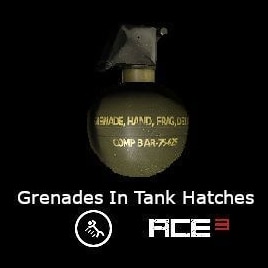 Launchman
Offline
See all 309 collections (some may be hidden)

Overview
This mod is a lightweight ace extension that allows players to throw grenades into tracked armoured vehicles using the ace interaction menu. Its implementation is focused on staying in line with other ace features as well as insuring compatibility with as many mods as possible.

Usage
In order to drop a grenade in, the crew of the vehicle must not be on the same side as the player, and must not know about the player. Basic procedure to achieve this is to sneak up to an enemy tank and access its ace interaction. If the tank has seen the player in the last 120 seconds it will be impossible to drop a grenade in as the crew is on high alert. Enhanced movement or a substitute is recommended if the player wishes to physically climb on top of the vehicle.

Compatability
This mod is by default compatible with all vanilla tanks and tracked apc's and any mods who derive classnames from them (meaning most mainstream mods). It has been tested with rhs, cup and IFA but should work for a multitude of others.

For grenades as of update 1.2 the vanilla m67 and v40 mini are used by default, in order to use other grenades, navigate to the cba settings for this mod and add the classname of the desired grenade (e.g. "rhs_mag_f1") to the list of grenade classnames in the format <classname1,classname2,classname3>. If done correctly this allows compatibility with any grenades from any mod desired. This list can also be edited to allow only a single grenade, or set of grenades from a select faction.

Balance
Care has been taken to balance this mod, however it is yet untested in large scale multiplayer and may go through changes following this.

The mod is not necessarily recommended for heavy milsim groups, while balanced and in line with much of ace, it is neither heavily simulated or particularly realistic.

Precautions
Reminder
This mod is ultimately very silly and based mostly on WW2 movies. Have fun with it.

Looking for a UK/EU unit to play with this and other mods? Check out: Task Force Phalanx
< >
76 Comments

Ace Apr 24 @ 10:41am
Darn it, I wanted to dunk grenades down tank hatches like in the old PS2 game Mercenaries.

Ace Mar 20 @ 4:13pm
Is it possible to have a version of this mod or an option that disregards the need for sneaking? Yes I know it's silly. I want to do it anyway.

MAJ Thomas - ASOT Sep 8, 2021 @ 1:53pm
@OdinsGuard_TTV
It already is. Read the description and it gives you all the information you need to use the mod.

MAJ Thomas - ASOT Aug 22, 2021 @ 11:53pm
@Launchman
Hey mate,
Just wanted to ask if adding the class names to the XEH_preInit.sqf under the data string (line 6) would do the same as adding them via addon settings?
Cheers man.

Launchman  [author] Aug 7, 2021 @ 2:31pm
@Arend the Bastard, @Zak is correct in his response, it is very easy to allow any type of grenade to be used, however when specifying grenades the "set your grenade spiel" is in fact necessary. Furthermore if you'd cared to take a closer look at the mods functionality, you would have seen that you do actually need the grenade in your inventory and the script will actually remove that specific grenade once used.

Zak Aug 1, 2021 @ 4:57am
@Arend the Bastard Presumably because ACE Grenades includes ALL grenades, including chemlights, smoke grenades, and potentially modded "grenades" like throwable cans and bottles.

Gdad Jul 30, 2021 @ 1:23pm
Can a keybind be associated with this like other interact/self interacts can?

Arend the Bastard Jul 6, 2021 @ 7:00pm
Small suggestion,
Instead of asking the user to specify the grenade to use in CBA settings, and then magically pull that grenade out of their arse, why don't you just use the same mechanic ACE uses to detect the grenades a player has in their inventory (See ACE Grenade Throw) and just use one of those? It would massively simplify this whole "set your grenade" spiel, whilst also being somewhat more realistic since... You know... You actually need to have a grenade in your inventory to use it.
< >