Store Page
Tabletop Simulator>  Workshop > john.clowdus's Workshop
This item has been removed from the community because it violates Steam Community & Content Guidelines. It is only visible to you. If you believe your item has been removed by mistake, please contact Steam Support.
This item is incompatible with Tabletop Simulator. Please see the instructions page for reasons why this item might not work within Tabletop Simulator.
Current visibility: Hidden
This item will only be visible to you, admins, and anyone marked as a creator.
Current visibility: Friends-only
This item will only be visible in searches to you, your friends, and admins. 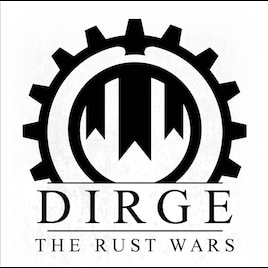 This item has been added to your Subscriptions. Some games will require you to relaunch them before the item will be downloaded.
Description
Dirge: The Rust Wars by Small Box Games. Official TTS Mod.

Players create a Warband of two different Units, adding those Units' Ability Cards to their starting deck. Throughout the game, these Units are moved around the board (a 4x4 grid of 9 Locations; each with their own effects) to attack units and score Victory Points. Ability Cards manipulate the game several ways.

The three Action Cards, along with the Turn Sequence Card, drive the game through round based game play, where each round, each player will receive three turns.

Players score Victory Points for destroying an opposing Unit, playing two or more Cards during their turn, having both Units survive the round, and for controlling the vast Sawgrass Sea.

Small Box Games is a small, independent, one person operation, and your support helps me to continue making the card games I design and publish.

If you have any questions, please don't hesitate to ask.

Thank you for checking out the games I design!