Greenlight > Games > @paxclara's Workshop
Greenlight is being retired. For more information on how to submit games to steam, refer to this blog post.
This item has been removed from the community because it violates Steam Community & Content Guidelines. It is only visible to you. If you believe your item has been removed by mistake, please contact Steam Support.
This item is incompatible with Greenlight. Please see the instructions page for reasons why this item might not work within Greenlight.
Current visibility: Hidden
This item will only be visible to you, admins, and anyone marked as a creator.
Current visibility: Friends-only
This item will only be visible in searches to you, your friends, and admins.
Blessed Ones
Description Discussions0 Announcements2 Comments47 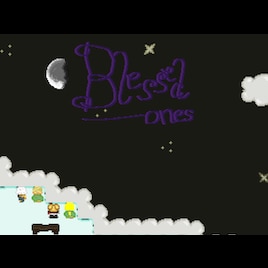 YangusKhan
Offline
See all 2 collections (some may be hidden)

View Blessed Ones in the store

Store page
Recent Announcements View All (2)
Blessed Ones is out now in Early Access
December 7, 2015 - YangusKhan

Hello anyone who ends up reading this!

So earlier this year, we got Greenlit mostly out of nowhere and completely unexpectedly. We redoubled our efforts and made some personal sacrifices once that happened in the hopes of getting this game actually on sale...and that day has come! Last Friday, December 4th, we finished our first Early Access version and put it up for sale.

This Early Access version is actually fairly different from the demo we released on Greenlight, specifically in terms of the story and NPCs. On top of that, future updates in Early Access will demonstrate the new, non-linear storyline we did a complete revamp of.

We want to thank everyone who voted for us in Greenlight. Apparently every single one of those votes was important!

We've made some improvements to the demo, mostly on the art side of things but a few balance tweaks as well:

Improved menu scaling for the larger resolution
Improved monster scaling for the larger resolution
Improved window borders
Improved some PC and NPC graphics
Added window color options
Added item icons
Clarified some skill descriptions
Rebalanced Feralist, so it now starts with a certain number of Killing Intent charges, each of which increases crit chance. There are some ways to gain more charges, such as using Focus or through Class Specialties
Increased basically everything's damage outputs
Fixed some clipping glitches and a few crashes
Rewrote early cutscenes for tone
Rewrote some NPCs' dialogue for tone

I think that's it. The demo's about 3-4 hours long and should give you a good idea of what the game's like, so if you haven't played it yet, do so. We're planning on shifting gears due to the lackluster response this has got on Greenlight and working another project up to a Kickstarter or Indiegogo campaign level before finishing off Blessed Ones, but the game should be complete and released in late May.

noblekale Jul 13, 2014 @ 2:50am
The UI looks cluttered, but I think I'd be interested for the right price (not sure what that price would be though), so it's a yes from myself.

@paxclara  [author] Apr 15, 2014 @ 11:30pm
@Demhier Erklärten There's a lot of text in Magic: The Gathering for basically the same reason: we want the skill descriptions to be as clear as possible. I like text heavy games anyway, and a lot of it is optional.

Blessed Ones has been Greenlit and is now listed in the Steam store. For the latest information, purchase options, and discussions for Blessed Ones, please see it on the Steam Store or in the Steam Community.
Visit Store Page
For more details Visit Community Hub
For latest discussions
If you really, really want to, you can continue to the Greenlight page. Information on this page may be out of date, since all the action has moved to the areas noted above.