Store Page
Garry's Mod>  Workshop > 8sianDude's Workshop
This item has been removed from the community because it violates Steam Community & Content Guidelines. It is only visible to you. If you believe your item has been removed by mistake, please contact Steam Support.
This item is incompatible with Garry's Mod. Please see the instructions page for reasons why this item might not work within Garry's Mod.
Current visibility: Hidden
This item will only be visible to you, admins, and anyone marked as a creator.
Current visibility: Friends-only
This item will only be visible in searches to you, your friends, and admins. 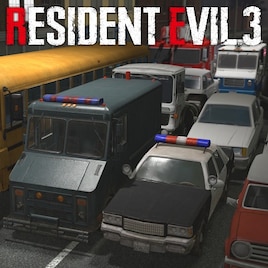 8sianDude
Offline
See all 613 collections (some may be hidden)

This item has been added to your Subscriptions. Some games will require you to relaunch them before the item will be downloaded.
Description
Raccoon City vehicle props ported from Resident Evil 3 Remake.

Capcom made some rather interesting choice for vehicle assets featured in a 1998 mid-west American city. Some vehicles are way too modern for the era such as the Mercedes van seen crashed into the pharmacy. Some vehicles, such as the 1986 Chevy Caprice police car, are a bit outdated as Police Departments around the late 90s were rapidly adopting the 1994 Chevy Caprice or the First Generation 1992-1997 Ford Crown Victoria as patrol cars. Which, the latter was featured in the original RE3 CGI intro cutscene.

*Notes/trivia:
> Use the bonemerge tool for trucks with trailers and for attaching the fire truck's ladder.
> Unfortunately, due to the truck models being a bit too high poly'd for Gmod, some parts must be compiled separately.
> The Fire Truck will not feature transparent glass material, since it's the only vehicle Capcom did not model with an interior. Presumably due to the model having too much polygons.
> RE2 SWAT van decals is flipped on one side.

CPD's pet homo Jul 7 @ 4:06am
@Batman in the spawnlist menu scroll down to "addons" then expand it, scroll down to the section where it starts with R and look through it (goes down in alphabetical order)

No1TDW Jun 9 @ 12:57pm
I know its abit much but anyway to recolor the cars, even to the damaged ones since I like to reuse the cars but with different colors just like in L4d2

eddiewhyte1 May 1 @ 5:29am
ok i got it working but some of the props aren't appearing like the SWAT van

eddiewhyte1 Apr 1 @ 12:58pm
this addon isn't appearing up for me for some reason. Any solutions?

Casual half life fan Mar 29 @ 11:29am
Better than nothing! Thats great! I hope that they do actually come out

8sianDude  [author] Mar 28 @ 11:43am
I personally got no plans on porting these cars to L4D2, since Majka is willing to do it instead.

Casual half life fan Mar 28 @ 3:54am
seeing these models in Left 4 Dead 2 would truly be something fantastic. you have already done the police car for L4D2, that is a very good start!
< >