Store Page
Conan Exiles >  Workshop > WildCypher's Workshop
This item has been removed from the community because it violates Steam Community & Content Guidelines. It is only visible to you. If you believe your item has been removed by mistake, please contact Steam Support.
This item is incompatible with Conan Exiles. Please see the instructions page for reasons why this item might not work within Conan Exiles.
Current visibility: Hidden
This item will only be visible to you, admins, and anyone marked as a creator.
Current visibility: Friends-only
This item will only be visible in searches to you, your friends, and admins. 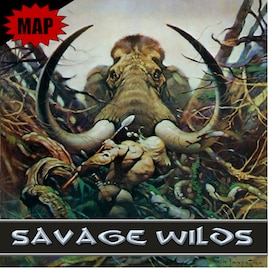 WildCypher
Offline
See all 1421 collections (some may be hidden)

This item has been added to your Subscriptions. Some games will require you to relaunch them before the item will be downloaded.
Description
Base information
Mod ID: 2377569193
Minimal download size: The Savage Wilds is roughly 1.8gb in size (uncompressed)
Maximum Compatibility: Compatible with all other non-map mods (loading order doesn't matter)
Size: The Savage Wilds houses roughly 35 square kilometer of playable space Vs. Exiled Lands (about 31)

Dungeons
Savage Wilds has a dungeon hub named "No Mans Land". No Mans Land is an open playable (but not buildable) space where you can explore, find secrets, fight powerful bosses and of course, get new recipes and loot. This dungeon hub grants access to a number of dungeons, as listed below:
You can access the No Mans Land area through Shima, who will escort you there in exchange for Bronze Coins. In addition, Savage Wilds has a number of caves and instances that you might call dungeons, such as the Tomb of the Atlantean King spread across the map.

RP Support
Savage Wilds has a number of areas dedicated to admin-only builds. Use our admin-placeable Gates or other mods to teleport to these locations.

Additional things worth knowing
Incompatibilities
Savage Wilds modifies no base-game assets and should be compatible with every mod that is well-groomed. That said, certain mods might not be, (out of date or otherwise modifying data/core Funcom blueprints in naughty ways) and thus could be incompatible with the map (for whatever reason).

EULA Compliance
This mod contains assets (art, music, code, items, systems and/or designs) that are the intellectual property of Funcom Oslo AS or their licensors