Greenlight > Games > Kiesto88's Workshop
Greenlight is being retired. For more information on how to submit games to steam, refer to this blog post.
This item has been removed from the community because it violates Steam Community & Content Guidelines. It is only visible to you. If you believe your item has been removed by mistake, please contact Steam Support.
This item is incompatible with Greenlight. Please see the instructions page for reasons why this item might not work within Greenlight.
Current visibility: Hidden
This item will only be visible to you, admins, and anyone marked as a creator.
Current visibility: Friends-only
This item will only be visible in searches to you, your friends, and admins.
DUELYST
Description Discussions19 Announcements2 Comments538 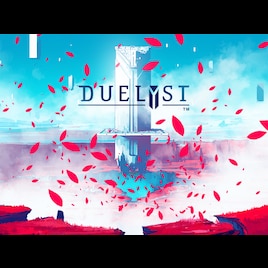 Kiesto88
Offline
See all 149 collections (some may be hidden)
Kickstarter

View DUELYST in the store

With only 5 hours to go, please support us on Kickstarter: http://kck.st/NLR937

With only 12 days left, please support us on Kickstarter. Thank you so much!

Read More
Description
Release date: Q4 2014
Duelyst is a tactical turn-based strategy game with a heavy focus on ranked competitive play, brought to you by veteran developers and creators from Diablo III, Rogue Legacy, and the Ratchet & Clank series.

The focus is on squad-based combat on a tactical map with fast-paced multiplayer 1v1 battles where victory comes from defeating your opponent's General. At launch, there will be five unique factions with a roster of 100+ battle units and spells.

- Customize Your Battle Squad: Select from a roster of 100+ battle units and spells, each with different stats and abilities that interact in unique ways during combat. No squad or battle will play out the same.

- Skill-Based Tactical Combat: The emphasis is on unit positioning, understanding your squad's capabilities, anticipating your opponent, and maintaining board control. At it's core, it's a tactical tabletop board game without all the manual math calculations.

- Short Sessions: Each game session is designed to be played in less than 30 minutes, so players can engage in competitive skill-based games without investing hours towards a single session.

Kidkamando Aug 10, 2016 @ 12:41pm
I played the game (it's free on their website for now) and it's really fun. It has HD graphics with a pixelated art style that really works for the game. The different classes are really balenced well and I haven't had a single glitch yet (after about 10 hours). The game is polished to a tee, and is really good. This game is great, an true jem in the gaming world. If you like Turn-Based Strategy with customizable armies, this game is for you. If you like Hearthstone you will love this game. I can't say enough good things about this game. But, at least give it a shot. What do you have to lose? I mean, it's free.

Spathinator Jul 16, 2016 @ 4:47pm
Great game with a unique art style and for anyone wanting to Scratch that scrolls itch.

internisus Jul 3, 2016 @ 3:34pm
Will accounts link when the Steam version is released, or will we have to start over?

DUELYST has been Greenlit and is now listed in the Steam store. For the latest information, purchase options, and discussions for DUELYST, please see it on the Steam Store or in the Steam Community.
Visit Store Page
For more details Visit Community Hub
For latest discussions
If you really, really want to, you can continue to the Greenlight page. Information on this page may be out of date, since all the action has moved to the areas noted above.